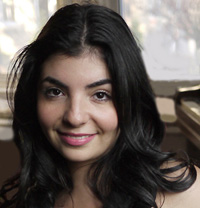 The exquisite colours of Sophie Berkal-Sarbit’s voice are the icing on the cake of one of the most magical versions of Leonard Cohen’s “Hallelujah” that has ever been recorded. Bill King’s masterful piano work and completely inspired production couches this young, fresh voice in a web of beauty that transports one to a higher level.

“Sophie’s Hallelujah is heavenly.
Her voice is sweet and true with a haunting nostalgia that carries you far away.”

Dave Charles
JAZZ.FM91
In splendid voice as always on “Hallelujah”, Sophie Berkal-Sarbit mines new glory from the Cohen classic – just as she has infused the Canadian music scene with the excitement and enthusiasm of the next generation of jazz stars.

“All I can say about Sophie Berkal and the mesmerizing version of this song is ‘Hallelujah’ ! for offering the best rendition ever recorded.”

“The oft-covered Leonard Cohen classic “Hallelujah” is given a vibrant and refreshing interpretation by fast-rising young jazz songstress Sophie Berkal-Sarbit. Sparse piano and Sophie’s pure and haunting vocals are perfectly complemented with soaring strings. A winner.”

When you take a chance renewing a classic song that has had so many definitive approaches you place yourself in the crosshairs of the music world.

“When Sophie told me she wanted to record one of the planet’s most beloved songs, “Hallelujah,” I caught my breath – rolled my eyes and thought to myself ‘Why?’ Revered versions by John Cale, Jeff Buckley, Rufus Wainwright and k.d.Lang come to mind – not to mention the most recent Canadian Tenors,’ says producer/pianist Bill King.

“I think I can bring something different to this,” says Sophie. King’s response –“O.K.” let’s just see what happens in the studio. This should be totally improvised. Things should happen organically –if it doesn’t we’ll do ourselves a solid by stepping away and leaving the world short one more unnecessary misfire.”

It’s always about establishing a mood – a moment of decision filled with tension, intimacy and contrasts.

After a first improvised run through the arrangement composed itself. It’s the marriage of the two – piano and voice –a quiet solitude. Carefully considered notes borrowed from the upper regions of the piano placed at intervals falling like isolated rain drops gently lay the framework for what was to come – a full symphonic orchestration within the range of the glimmering Bechstein.

Berkal-Sarbit embraces the languid tempo – one that takes a poetic stance. Rather than abruptly shift verse to verse the piano intercedes reserving the time in between to contemplate the spiritually bittersweet lyrics.

The church like harmonies sound closure, much like the parting measures of a Beethoven sonata. Then total silence.

No third takes or let’s change this or that – the piece is complete.

Studio head George Rodina got wind of the session engineered by Bernie Cisternas ‘and suggested sending ‘Hallelujah’ to Los Angeles where a couple of string section arrangers might be interested in contributing. As luck would have it violinist Christian House heard what everyone heard and volunteered added sweetening.

“My approach was to come up with something with few distractions for the viewer,” says video director, Chris Gentile. “Sophie’s voice elegantly surrounds the piano and had to be just right visually. The more I listened to “Hallelujah”, things began to come clear. This had to be a black and white video, classic in filming style, with an edit style of dissolves and soft fades. No colors or background textures just simple and clean. There was no need for a place or set, just perfect classic portrait lighting. This was all I needed to tell the story.”