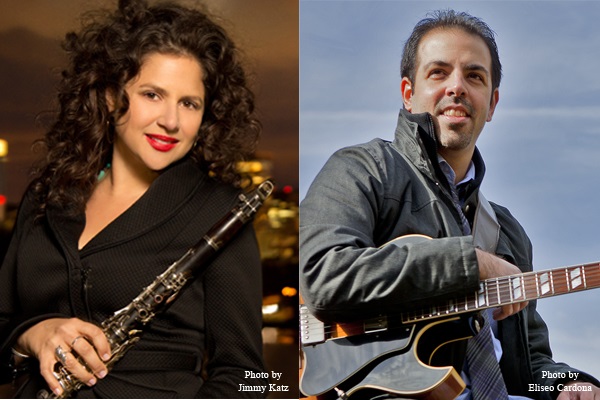 Anat Cohen, her debut album, Place & Time, was released in 2005 on Anzic Records. In 2007 she won the awards for “Up and Coming Artist and Clarinetist of the Year” from the Jazz Journalists Association. She was also voted Clarinetist of the Year in 2008, 2009, 2010, 2011, and 2012 and honored as the inaugural “Multi-Reedist of The Year” in 2012. She has received multiple citations in Down Beat magazine’s annual critics and readers polls in multiple categories including top rankings for “Rising Star” and “Clarinet”. Cohen performs regularly and has appeared at a number of notable jazz festivals, including the Newport Jazz Festival, Montreal International Jazz Festival, Tudo É Jazz Festival and the North Sea Jazz Festival.     — Website: http://anatcohen.com/

The Assaf Kehati Trio have been playing together for the past year. The group have toured the USA, Colombia, Israel, Canada, and played at venues such as the Blue Note, NYC; Toronto Jazz Festival, Washington D.C. Jazz Festival, Barranquilla Jazz Festival, The Regattabar, Boston; and more. The trio is playing Mr. Kehati’s original compositions (such as The Almond Tree, Naked, The Horses’ Fight) and his arrangements of some of his favorite jazz standards (such as When Will the Blues Leave, Someday my Prince Will Come, Long Ago and Far away). The music is influenced by different genres of jazz, Brazilian music, Israeli music, American folk music, and more. “You’ll savor the exotic-sounding intimacy of this group”. – JAZZ NOTES

The Music: As a leader, Mr. Kehati has recorded two CDs that have received numerous rave reviews – A View From My Window (2010) and Flowers and Other Stories (2011). His compositions are inspired by the daily and trivial, yet wonderful and significant experiences of life: from a winter, snow-laden view of Fenway Park from his apartment porch (A View From My Window), to the mundane but satisfying life of a snail (Sunshine Berale), to a girl seeking love in a land beyond the oceans (The Snow and the Sun), and to a story about the universal character, Mr. Mario that travels the world like a gypsy to places like Africa, the Middle East and the Pyramids in Egypt (Mr.Mario). A third album by Mr. Kehati, “NAKED”, was just recorded and will be released in 2014.