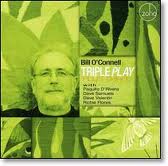 By: Edward Blanco
Composing and arranging for various Latin/salsa and jazz artists early on in his career, served as a defining foundation for pianist Bill O’Connell—which after writing and playing with legendary percussionist Mongo Santamaria in the 1970s—has made the pianist one of the major exponents of the genre today. A native of New York who has since performed with the likes of Chet Baker, Sonny Rollins and Randy Brecker among others, has long established himself with a Latin jazz discography that includes a 2008 release entitled Triple Play.

The original “Sweet Sophie Rose” opens the set with D’Rivera’s clarinet voice leading the music behind explosive percussions from Flores as the pianist provides the rhythm. O’Connell introduces the bluesy “Bill’s Blues” playing in a 5/4 time signature which, is regarded as unconventional for the genre which is why this tune sounds far more straight ahead and contemporary than Latin influenced. Flautist Valentine enters the music on “Crazy Samba” as the pianist provides a pronounced bass line in a number that comes across as a dark samba than the normal Brazilian sound one would be a accustomed to.

Monk’s “’Round Midnight” is one of the special treats of the album, completely re-harmonized and taken over by O’Connell’s lush chords and D’Rivera’s clarinet. On the sets only duo performance of the album, O’Connell’s swift right hand is matched by percussionist Flores as he pounds the congas into submission. Vibraphonist Samuels appears on four tracks the first of which was the opening piece and the intricate “Non-Sense” being the second. But it’s not until “Cobblestone” that the Samuels makes a definitive statement.

“Mr. E.P.” and “La Playa” are the closing tunes wrapping up a light and brisk session of Latin-infused jazz. If Bill O’Connell hoped to bring back some of the magic of the original 2008 release, he may have well succeeded beyond his expectations. Triple Play Plus Three is a crisp and accessible slice of Latin Jazz without the assortment of loud instruments usually found of an accompanying ensemble sound normally associated with Latin music.
Year: 2011 Label: ZOHO Artist Web : www.billoconnell.net