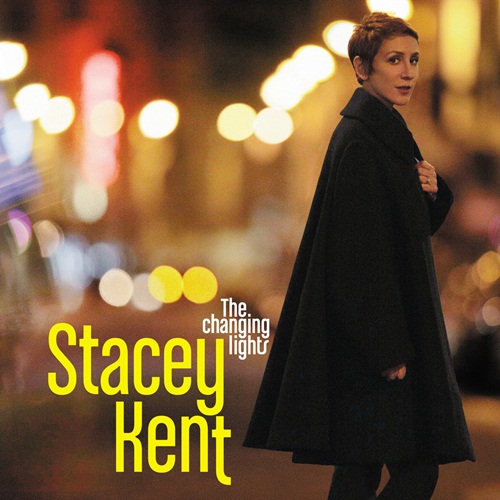 Sticks in your head.

That’s what Stacey Kent’s singing does. It sticks in your head.

Yesterday, while I was involved in some home improvement duties, I couldn’t get her song, “Changing Lights,” out of my head. Intriguingly enough, Kent is neither dramatic nor dynamic in her singing. She is calm and forthright, with emotional undercurrents that reveal themselves quietly through the inescapable trap of story-telling that, in the end, captures the listener.

Makes sense. Kent majored in comparative literature. She knows a good story when she sings one.

So which other singers understate the emotional punch of their songs through powerful universal stories delivered melodically? Well, Brazilian singers, as one example. After Kent explored the music of American and British songwriters/story-tellers, it was only natural that she would gravitate toward Brazilian music as well, whose melodic narratives gripped the world’s imagination as a sultry discovery over forty years ago.

Changing Lights is the result.

Kent inhabits England and the United States, but the Brazilian spirit has begun to inhabit her soul. It’s a natural habitation, especially enhanced by her collaboration with husband Jim Tomlinson, a Stan Getz enthusiast. Combine Kent’s absorption of uniquely Brazilian soulfulness and her grasp of the Brazilian language refined at Middlebury College with Tomlinson’s thorough knowledge of Getz’s bossa nova recordings and his seamless integration of singing saxophone lines woven into Kent’s lyrics. Then you get an appropriately unforced new voice interpreting Brazilian classics with engaging arrangements. So convincing is Kent’s singing in Brazilian that she receives the praise of Brazilian bassist Zuza Homem de Mello, who reports that she “lends to her interpretations the essence and intimacy which characterized the great singer of Brazilian music, João Gilberto.”

The Brazilian connection is unmistakably evident on “O Barquinho,” not only with Kent’s immersion in the quiet, inviting effortlessness, but also in Tomlinson’s flowing, sweet-toned Getz-like solo of sighing tones in a different key from hers. Furthermore, Kent was privileged to record “O Barquinho” in Rio de Janeiro with the song’s composer, Roberto Menescal, who accompanies her on guitar. Making the best of the opportunities at Menescal’s O Barquinho Studios, Kent recorded a new composition by Tomlinson and Brazilian lyricist Antonio Ladeira, “A Tarde,” backed solely by Menescal on acoustic guitar.  Kent and her band pay tribute to other Getz-recorded Brazilian tunes like “How Insensitive,” “One Note Samba” and “Corcovado.” In the case of “Corcovado,” Kent and Tomlinson recruited the Ebene Quartet of France, which has drawn praise for both classical and jazz interpretations, to add loping stringed rhythm behind Kent’s voice before the quartet contrasts her sweetness with a shimmering, vibrant, dynamically charged rubato interlude.

But, once again, one of the anticipated charms of Kent’s album is the inclusion of new music.

Having teamed up with Tomlinson and various lyricists—most notably novelist Kazuo Ishigura, author of Remains of the Day—Kent introduces, as she has in past albums, new songs with wit, intelligent observations, local color and narrative flow that no doubt will be recognized and re-recorded by other singers. The instantly engaging “Waiter, Oh Waiter,” more than just a novelty song, attains a Bob Dorough (“Health Food Nut”) or Dave Frishberg (“Let’s Eat Home”) style of whimsy with smile-provoking playing-dumb lyrics like: “Waiter! Oh Waiter! Come to my rescue / I cannot understand a word  / That’s written on this menu / Not that I’m unaccustomed to this kind of smart cuisine / But what was handed me / Is in a language I’ve never seen…. / Waiter! Oh waiter! I feel so embarrassed / If this is really French / It’s not the kind they use in Paris.” Only a couple months since The Changing Lights’s release, “Waiter, Oh Waiter” appears on Spotify with classics like  “Triste” by Antônio Carlos Jobim and “Para Machuchar Meu Coração”—by Stan Getz.

One can discern a novelist at work on the lyrics of “The Summer We Crossed Europe in the Rain,” not only as it sketches human interaction. It also hints at the kind of people who would be involved in such activity (young healthy adults who can afford to spend a summer crossing Europe) with Cole Porter-ish unexpected rhymes and almost-rhymes: “You say it’s the way / These passing years have treated you / That the weight of the dreams / You once carried has now defeated you / That our candlelit dinners will all / Just be re-heated through / Our quarrels and disappointments / Just get repeated too…. / Let’s be young again / If only for the weekend / Let’s be fools again / Let’s fall in at the deep end / Let’s do once more / All the things we did before / The summer we crossed Europe in the rain.”

John Parricelli deserves special kudos for his ringing atmospheric guitar solo on “The Changing Lights,” which includes equally memorable scene-setting lyrics like “We were in the back seat / Of a cab we couldn’t afford / You learned toward the window / To see the traffic up ahead / “These commuters here,” you said / “Could be the walking dead” / And we vowed to guard our dreams / From all the storms that lay ahead / From the winds of fear / And age and compromise / And we laughed about the hopelessness / Of so many people’s lives / As we slowly moved / Toward the changing lights…. / [Later] As I approached, you turned around / A question in your eye / You thought I might ignore you / And just simply walk on by / But we smiled and talked a while / About each other’s lives / And once or twice I caught a wistful note / Then you moved towards the crossing / As the cars stopped to a halt / And we waved and parted / Beneath the changing lights.”

Sticks in my head.