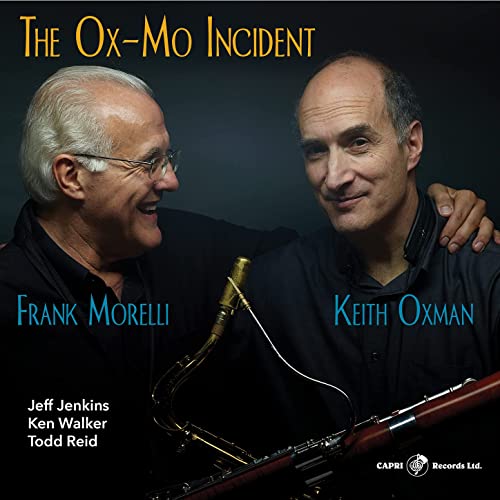 That album, The Ox-Mo Incident, bears a title that abbreviates the musicians’ names with a clever but perfect play on words referring to the Western movie, The Ox-Bow Incident starring Henry Fonda.

After Oxman’s wife passed along Morelli’s suggestion that her husband and Morelli record together, eventually they arranged for a recording date. And then the magic happened. Who would have guessed?

Since many Broadway plays’ compositions derive from classical themes, much of The Ox-Mo Incident includes readily identifiable musicals’ songs that many other jazz musicians have adapted for improvisation. Morelli and Oxman meet in the middle, Morelli from the classical music repertoire and Oxman from that of jazz, with not-quite-solely-classical and not-quite-solely-jazz pieces with which both are familiar.

No indication of discomfort is evident from the recording that documents when these two horn players met and started recording together for the first time. Indeed, seasoned and professional, Oxman and Morelli project more than comfort, but obvious joy, even playfulness, when they perform on the album.

The Ox-Mo Incident, incidentally, commences appropriately with “Happy Talk,” Bloody Mary’s song from South Pacific, as an indication of what will happens throughout the album’s remaining ten tracks. Happiness does ensue, first, after anticipations of the beat, with the written unison variation of the melody. Even within their unison performance, Morelli seamlessly, teasingly plays one note after another in varying bassoonistic octaves, never losing the sense of swing established by their introduction. Then in jazz tradition, their improvisations use the song’s melody as the basis for confident, ebullient improvisations. The closing choruses recall the melody with a combination of harmonic and unison gracefulness, Oxman lowering his tone to be nearer to the middle to upper range of the bassoon.

Living in Denver, Oxman may not have received the attention to his previous recordings that New York-based musicians might enjoy. But Oxman’s recordings, and those with the Denver-based jazz group, Jazz Worms, have been discovered and acclaimed, now that jazz is available without boundaries in media like Spotify.

The combination of bassoon and saxophone works so well that one may wonder why jazz bassoon hasn’t been recorded before.

Hubert Laws played bassoon on Chick Corea’s “Trio for Flute, Bassoon and Piano” on Inner Space. Katherine Young played bassoon with Anthony Braxton’s 12 Duets, among other recordings. Josea Taylor was the bassoon player on Yusef Lateef’s The Centaur and the Phoenix. Frankie Trumbauer switched to bassoon as needed on recordings with Eddie Lang and Bix Beiderbecke. Illinois Jacquet performed his “Bassoon Blues” on The Message. And then there is Michael Rabinowitz, the jazz musician who plays bassoon as his primary instrument.

Despite the difficulty of mastering the instrument, Morelli’s virtuosity with the double-reed bassoon, with its rich tonal colors and distinctively identifiable sonority, proves that the fascinating results are worth the dedication to the instrument. New York audiences have enjoyed Morelli’s nine concerts at Carnegie Hall and his collaborations with the Orpheus Chamber Orchestra and Windscape. But until The Ox-Mo Incident, Morelli didn’t record in a jazz context.

Who would have guessed? Morelli improvises naturally with Oxman as they project cheerfulness, enchantment or whimsy, thereby infusing each track with personality.

Evoking smiles, the quintet plays “The Surrey with the Fringe on Top,” recorded by Sonny Rollins on Newk’s Time, Ahmad Jamal on Poinciana, and the Miles Davis Quintet on Steamin’. Surging ahead with an energetic piano introduction from Jeff Jenkins, Oxman and Morelli trade the melody bouncily before and after the repeat before playing unison with swinging ease, Jenkins and bassist Ken Walker contributing their own commanding, vibrant solos. “Stranger in Paradise,” played at a faster-than-usual tempo, projects cheer too, the trading of solos, elegant with horns’ rich hues and Jenkins’s coruscating piano work, makes being a stranger a delight.

The beauty of Morelli’s instrument—capable of three octaves for creating lush sonorities, growls or sweet appeal—is showcased on Fauré’s “Pavane,” written as a slow dance for the Spanish court in the late 1880’s. While one would expect the performance to be solely Morelli’s, it’s a delight to discover that the other members of the quintet are familiar with the composition as they perform with classical authority. But then, they adapt the piece to jazz harmonies as they refer to Woody Herman’s version on which Frank Tiberi played bassoon. Or there’s “Full Moon and Empty Arms,” sung by Sinatra and others but composed originally by Rachmaninoff in his Second Piano Concerto, its largo tempo suggesting through song its allure. Adding the quintet’s own stamp to the performance, Jenkins develops a broadly chorded solo of dreamy charm, and Oxman ends the track with a masterful extended cadenza.

The Ox-Mo Incident obviously is a project driven by the fun and exploration when Ox met Mo. And so, Oxman wrote “A Wasp in Search of a Hart and Lung,” alluding in good-natured fashion to an incident when he attempted to be as proficient on violin as he is on saxophone. The piece consists of post-bop twists and turns and accents and jazz harmonies, to which Morelli adapts as easily as Oxman adapts to the classical choices for the album. Yet, this piece, with its droll inspiration, allows for each of the accomplished musicians to solo with medium-tempo immersion into the improvisational opportunities that the composition provides.

As Morelli and Oxman expand their recorded experiences on The Ox-Mo Incident, they developed a kinship of values larger than adherence to a single genre of music, but one that proves that music itself can promote joy, mutual understanding and friendship.