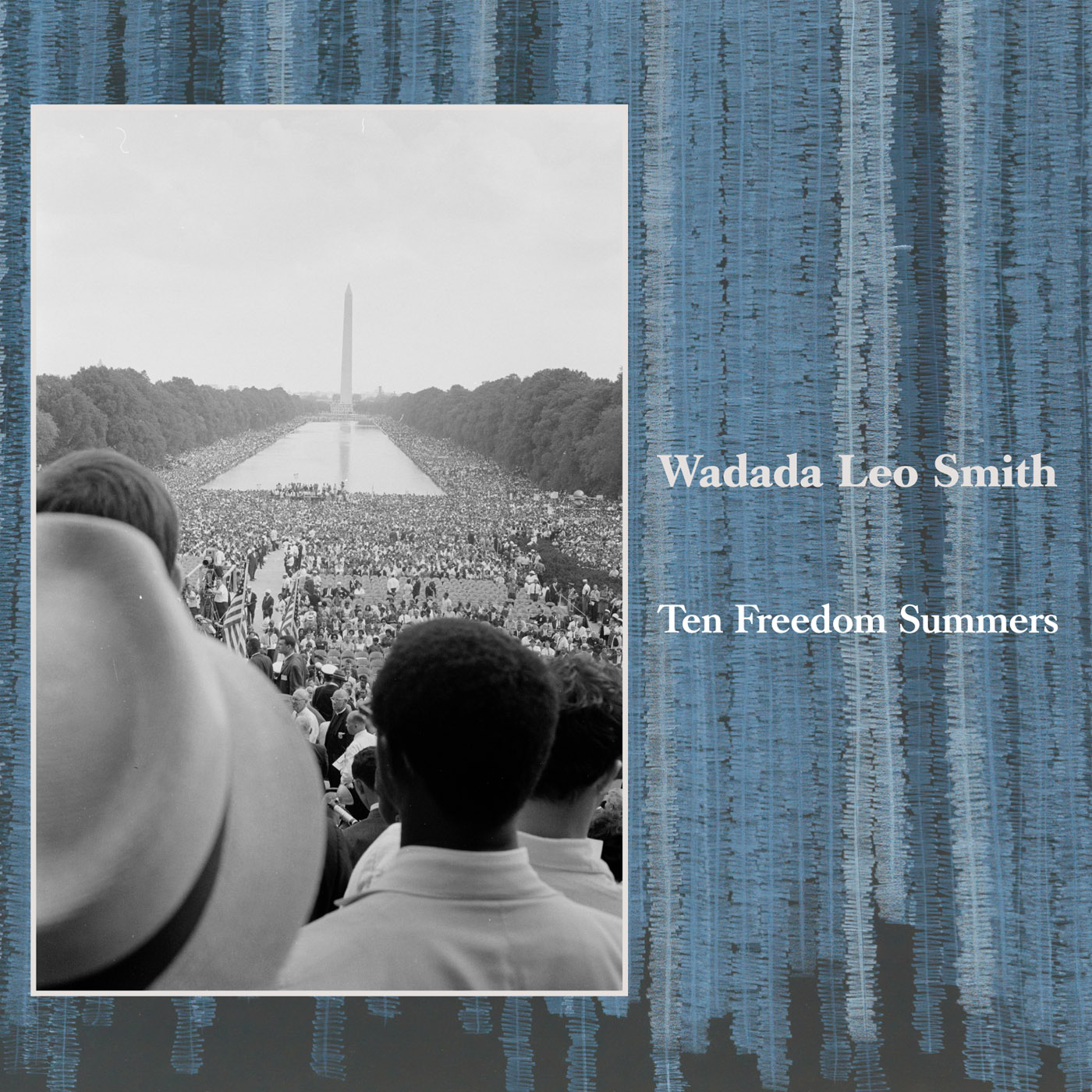 “A stunning achievement, with the dramatic sweep of the trumpeter’s writing (for both a chamber orchestra and his own small group)… It merits comparison to Coltrane’s A Love Supreme in sobriety and reach.”
— Francis Davis, Rhapsody Jazz Critics Poll

“Ten Freedom Summers was as striking a display of his expansive vision and his vitality. He still plays trumpet as he always has: with little vibrato and a tone that can be either boldly declarative or soft to the point of breaking… Mr. Smith had made his own statement through instrumental music. And it sounded complete.” — Larry Blumenfeld, Wall Street Journal

The event will also premiere the 23rd work in the TFS collection: That Sunday Morning: Addie Mae Collins, Denise McNair, Carole Robertson and Cynthia Wesley: We Carry You In Our Hearts, which remembers the victims of the 16th Street Baptist Church bombing. Smith will also be premiering new music written for the 22nd composition in TFS: The March on Washington, D.C. — August 1963.

The full three-performance multi-media presentation of the 7-hour collection takes place at 8 p.m. on Friday, October 25 (Ten Freedom Summers I); 3 p.m. on Saturday, October 26 (TFS II), and 8 p.m. on Saturday, October 26 (TFS III) at the Theresa and Jane Lang Theatre, Atlas Performing Arts Center, 1333 H Street NE, Washington, DC. Advance tickets are $33.50 per concert; tickets are $35.50 per concert at the door beginning 2 hours before the show. Tickets for all three concerts are $85.50 and can be purchased in advance or at the door. Student tickets, $20 per concert, available at the door, only. Call 202-399-7993 ext. 2 or log on to http://atlasarts.org/ for tickets and information.

More than a three-performance musical event, Ten Freedom Summers is a multimedia project that incorporates archival news footage and evocative but abstract cinematic imagery edited with a self-consciously musical sensibility. The production was inspired conceptually by August Wilson’s Pulitzer Prize-winning 10-play Pittsburgh Cycle, in which each play chronicles a decade of African-American life in the 20th century. Beyond being a passionate fan of Wilson’s work, Smith feels a deep personal connection to his plays as he provided the transcription of a 1920s Fletcher Henderson piece and contributed trumpet work to the original 1982 production of “Ma Rainey’s Black Bottom,” a score created by saxophonist Dwight Andrews (a member of Smith’s ensemble New Dalta Akhri who went on to collaborate frequently with Wilson). “I own all 10 of Wilson’s plays and have studied them over the years,” Smith says. “Much like Wilson, what I’m trying to do is give a full impression, show the psychological transformation that America achieved. Each piece has its own motivation, and what ties it together is the psychological thread. Rather than taking 10 decades, I took 10 freedom summers.”

Ten Freedom Summers has received rave reviews for performances worldwide. Reviewing the collection’s premiere at REDCAT in LA, Larry Blumenfeld wrote in the Wall Street Journal: “Ten Freedom Summers was as striking a display of his expansive vision and his vitality. He still plays trumpet as he always has: with little vibrato and a tone that can be either boldly declarative or soft to the point of breaking… Mr. Smith had made his own statement through instrumental music. And it sounded complete.”

Ten Freedom Summers received equal acclaim on CD. Released in May 2012 on the Cuneiform label, it earned a place as the #3 jazz record of the year in the Rhapsody Jazz Critics poll, where respected critic Francis Davis wrote: “A stunning achievement…. It merits comparison to Coltrane’s A Love Supreme in sobriety and reach.” National Public Radio included the CD in its Top 50 albums of 2012 and it placed eighth in the 2012 JazzTimes Critics Poll, while music criticism aggregator MetaCritic hailed it as the #1 under-the-radar album of 2012.

Ten Freedom Summers has been heralded as “stirringly beautiful … an astounding aesthetic achievement,” (Michael Casper, Oxford American), “an emotional and intellectual luxury, a chance to commune with greatness,” (Josh Langhoff, Pop Matters), “the work of a lifetime by one of jazz’s true visionaries. … Triumphant and mournful, visceral and philosophical, searching, scathing and relentlessly humane, Smith’s music embraces the turbulent era’s milestones while celebrating the civil rights movement’s heroes and martyrs.” (Bruce Gallanter, Downtown Music Gallery), and “his magnum opus; it belongs in jazz’s canonical lexicon with Duke Ellington’s Black Brown & Beige and Max Roach’s Freedom Now Suite.” (Thom Jurek, All Music Guide). As Stuart Broomer writes in Point of Departure: “If one had to answer quickly what work will matter most this year in American music (as if matters of mattering arose with some regularity), Wadada Leo Smith’s Ten Freedom Summers would trip readily to the tongue.”

Wadada Leo Smith, whose roots are in the Delta blues, is one of the most boldly original figures in American jazz and creative contemporary music, and one of the great trumpet players of our time. Born and raised in Leland, Mississippi, Smith got his start playing trumpet in R&B bands, encouraged by his stepfather, blues guitarist Alex Wallace. By the mid 1960s, he had gravitated to Chicago’s burgeoning avant-garde jazz community where he was part of the first generation of musicians to come out of Chicago’s AACM (Association for the Advancement of Creative Music). Smith formed the Creative Construction Company together with saxophonist Anthony Braxton and violinist Leroy Jenkins and collaborated with a dazzling cast of fellow visionaries including Muhal Richard Abrams, Richard Davis and Steve McCall. Early in his career, Smith invented an original music notational system called Ankhrasmation, which was radical for its time and remains the physical and philosophical foundation of his oeuvre.

Since the early 1970s, Smith has performed and recorded mainly with his own groups. He has released nearly 50 albums under either his own or his bands’ names on ECM, Moers, Black Saint, Tzadik, Pi Recordings, TUM, Leo, Intakt and Cuneiform, among others. In addition to the 4-CD Ten Freedom Summers, he also recently released two CDs on the TUM label: Ancestors, a duo CD with Louis Moholo-Moholo, and Occupy The World, a 2-CD set with the 21-member TUMO, a new improvising orchestra that was assembled specifically for this project.

He has been awarded grants and fellowships from the Fromm Music Foundation at Harvard University, the John Simon Guggenheim Memorial Foundation, Chamber Music America with support from the Doris Duke Charitable Foundation, the FONT (Festival of New Trumpet Music) Award of Recognition, Southwest Chamber Music funded by the James Irvine Foundation and the Clarence E. Heller Charitable Foundation, the MAP Fund and the National Endowment for the Arts, among others. An esteemed educator and music theorist, Smith has been on faculty since 1993 at Cal Arts, where he is director of the African American Improvisational Music Program and has profoundly influenced several generations of artists.

The Atlas Performing Arts Center is located in a historic movie theatre complex on H Street, NE. H Street had been a bustling retail corridor for decades before the 1968 riots. In 2003, spurred by Jane Lang’s vision and commitment to restore the Atlas as a performing arts center, the city adopted a plan to rebuild the corridor and identified the Atlas as central to the revitalization. Vacant for years, the Atlas movie theatre re-opened in November 2006 following an extensive four-year renovation. In addition to its theatres and dance studios, the Atlas also has administrative offices, dressing rooms, lobbies, a café and production and rehearsal spaces. The center is home to a diverse group of locally renowned theatre and dance companies, symphony orchestras, choral groups and arts education programs.

Through its programs and service to the community, the Atlas seeks to honor and maintain the history and traditions of H Street NE while also fostering the changes taking place to renew the H Street corridor. The Atlas has become the artistic heart of a community struggling uneasily with its transformation, and it seeks to be a center for community conversation, where a range of artistic and individual expressions can come together to be shared and celebrated.

The mission of the Atlas Performing Arts Center is to foster the artistic growth of professional and aspiring performing artists throughout the region; to create a new model for collaborative arts management; to establish a unique community-centered venue for training and education in the performing arts and stagecraft; and to energize and sustain the revitalization of H Street, NE and the surrounding community. Performances are held at the Atlas Performing Arts Center at 1333 H Street NE, Washington DC 20002.

Next post "...a proud participant of the movement keeping ART Close to Home” - Jacques Lesure