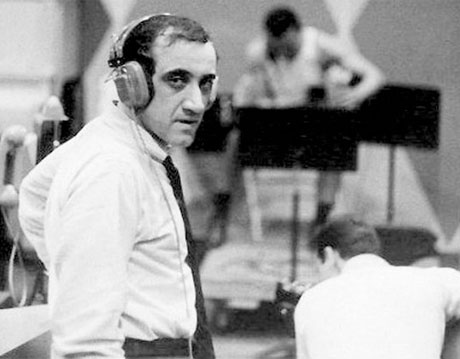 The popularity of black rhythm and blues and soul music in the 1960s owes a great deal to the work of white Jewish songwriters and producers such as Jerry Ragovoy, Bert Berns, Jerry Wexler and Phil Spector as well as the teams of Jerry Leiber and Mike Stoller, and Doc Pomus and Mort Shuman. They were strange bedfellows but it worked perfectly. Jerry Ragovoy ran his own studio, the Hit Factory in New York, made some famed records with Garnet Mimms, Howard Tate and Irma Thomas and wrote “Piece Of My Heart”, “Stay With Me (Baby)” and “Time Is On My Side”.

Jordan Ragovoy, known as Jerry, was born in Philadelphia, Pennsylvania in September 1930. His family was Italian, his father was an optician. The young Jerry liked playing the piano and, inspired by The Nutcracker Suite, wrote his first composition when he was eight.

In 1950 Ragovoy started working in the record department at Tregoobs, a store in Philadelphia’s black neighbourhood.

In 1953 he persuaded the store owner, Herb Slotkin, that they should start their own label, Grand, and feature local doo-wop groups. Ragovoy recorded the bizarre “My Girl Awaits Me”, by the Castelles, featuring the high tenor voice of George Grant. The single was a regional hit and sold 100,000 copies. Ragovoy’s first recorded composition was “This Silver Ring” (1954) for the group.

Ragovoy had a yearning to work in the music business but felt he needed more technical knowledge. He studied orchestration at night school and supplemented his income by giving piano lessons. Bob Marcucci asked him to work for his Philadelphia label, Chancellor, and he wrote arrangements for Frankie Avalon and Fabian. Ragovoy wrote his first hit song when Fabian took “About This Thing Called Love” into the US Top 40 in 1960. He wrote a full orchestration for a Marcucci song, “Disappointed”, recorded by Claudine Clark in 1962.

With Ed Marshall, the composer of Frankie Avalon’s “Venus”, Ragovoy wrote “A Wonderful Dream” for another Philadelphia act, the Majors, which he also arranged and produced. It made the US Top 30 in 1962, but he used the pseudonym Norman Marguilies, so that he could write clandestinely for both songwriting organisations, ASCAP and BMI. He was to change this to Norman Meade.

Ragovoy wanted to be a Broadway songwriter and he went to New York, hoping for success in the Brill Building.

He moved into soul music when he worked with a one-man creative force, Bert Berns. Berns had discovered Garnet Mimms and they wrote his US Top 10 hit, “Cry Baby” (1963). This set the style for Ragovoy’s intense soul ballads with a gospel base.

Another classic Berns/Ragovoy song for Mimms was “It Was Easier To Hurt Her”, also recorded by Dusty Springfield, Chris Farlowe and Wayne Fontana, who made the song a UK hit in 1965. A song written with Mimms, “Anytime You Want Me”, was recorded by The Who.

Another Ragovoy song, “Let’s Kiss And Make Up” was a US hit for Bobby Vinton.

Somewhat surprisingly, Ragovoy’s “Time Is On My Side” was first recorded by the jazz trombonist, Kai Winding, the musical director of the Playboy Club in New York City. It was then recorded by Irma Thomas as a stylish but impassioned soul ballad and it became a US Top 10 single for the Rolling Stones in 1964. In the same year, Ragovoy and Berns Berns wrote “One Way Love” for the Drifters, which was also a UK hit for Cliff Bennett and the Rebel Rousers.

Doc Pomus and Mort Shuman had a title song, “Girl Happy”, rejected for an Elvis Presley film. Ragovoy told Pomus to forget it and he and Pomus wrote a substitute song within 20 minutes.

This was accepted and the film was released in 1965.

In 1966 Ragovoy was working for a Warner Brothers’ subsidiary, Loma Records. He had written a song with George David Weiss, “Stay With Me (Baby)”, which he planned to record with a gospel singer, Lorraine Ellison. As it happened, Frank Sinatra cancelled a recording session the day beage fore it took place and by union rules, the 46-piece orchestra still had to be paid. Ragovoy was told he could use the orchestra – and it led to a soaring, spellbinding performance. It was not a hit for Ellison but a cover version by the Walker Brothers was a UK hit. The song was successful for David Essex (1978), Ruby Turner (1994), Rebecca Wheatley (2000) and, in 2009, Duffy, as part of The Boat That Rocked soundtrack.

Although Lorraine Ellison’s “Stay With Me (Baby)” was not a hit at the time – largely because she refused tour-its influence has been enormous, not least because of all the overwrought, overbearing and over-orchestrated ballads that we have heard from soul divas. Ellison’s record, though, was the real thing.

In 1967 Bert Berns had signed Aretha Franklin’s elder sister, Erma, to his Shout label. He and Ragovoy wrote her an extraordinary soul ballad, “Piece Of My Heart”, which became a belated UK Top 10 hit in 1992. It was covered very successfully by Big Brother and the Holding Company in 1968. Their lead singer, Janis Joplin, recordedseveral more Ragovoy songs including “Cry Baby” and “Try (Just A Little Bit Harder). She died in 1970 just before she was to record Ragovoy’s “I’m Gonna Rock My Way To Heaven”.

Ragovoy was asked to find songs for the South African artist, Miriam Makeba, but he decided it would be better to record her extensive repertoire of folk songs. He wrote the English lyric for “Pata Pata” which was a US Top 20 hit in 1967. She was married to the black activist, Stokeley Carmichael, who had his own ideas about how Makeba should be recorded. Ragovoy told him, “Hey, Stokeley, do I write your speeches?” Garnet Mimms introduced Ragovoy to a musician he had worked with in his youth, Howard Tate, and Ragovoy produced bluesy soul singles for him. Tate had success with “Ain’t Nobody Home”, “Look At Granny Run Run”, and “Stop”, all written by Ragovoy.

They made a fine album for Atlantic, Howard Tate, in 1972. The following year, Ragovoy started his own label, Rags, with Tate and Lou Courtney among his artists, but the project was short-lived. Tate’s career went on a downward spiral with drugs and alcohol but he worked with Ragovoy on a new album, Rediscovered, in 2003.

In 1968 Ragovoy had opened a studio in New York, primarily for himself, but in view of outside bookings he soon found himself in business, eventually running two successful studios called the Hit Factory. Among his own productions are Keep On Movin’ (1969) for the Paul Butterfield Blues Band (on which he also plays piano), Street Lights (1974) for Bonnie Raitt (with Ragovoy again on piano), and the single “Sure Thing” (1975) for Dionne Warwick.

In later years Ragovoy retired, but he did write “Either Side Of The Same Town” with Elvis Costello. In 2008, Ace Records released a compilation, The Jerry Ragovoy Story: Time Is On My Side.