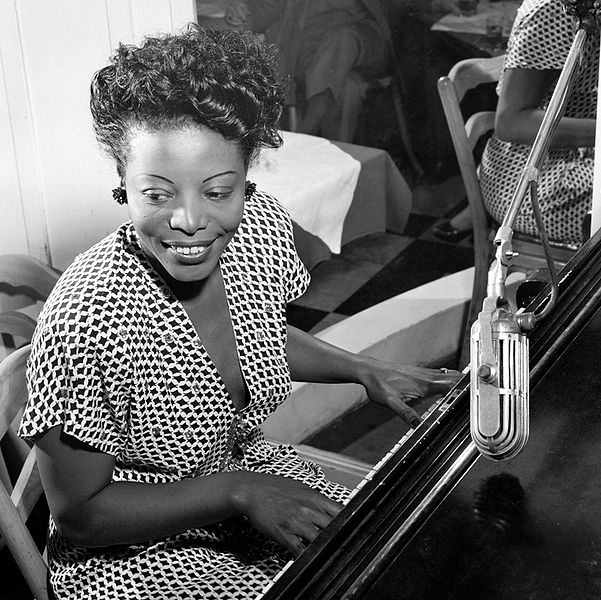 Arts at The Park

In celebration of Black History month, Arts at The Park’s  artist-in-residence Deanna Witkowski (“consistently thrilling” playing and “boundless imagination” –All Music Guide) will lead a quartet (with bassist Linda Oh, saxophonist Virginia Mayhew, and drummer Willard Dyson) and a 12-voice choir of professional jazz vocalists (including Sara Serpa, Tammy Scheffer, Miles Griffith) in a performance of works by the preeminent African-American jazz pianist, composer, and innovator Mary Lou Williams (1910-1981) who broke through her era’s significant barriers to women jazz musicians. The concert will take place on Wednesday, February 20that 8 pm at The Park Avenue Christian Church (known affectionately as “the Park”), 1010 Park Avenue at 85th Street in Manhattan. Tickets are $50 Front Orchestra; $25 General Admission; $20 Students/Seniors at www.smarttix.com.

Witkowski will also facilitate a pre-concert talk starting at 7:15 pm on the importance and influence of Williams on current jazz musicians.

The featured work on the program is Williams’ 1967 “Music for Peace,” a monumental work of sacred jazz informed by the Civil Rights movement and the liturgical reforms of the Roman Catholic Church’s Vatican II Council, as well as Williams’ own deep personal faith. Her remarkably original settings of traditional liturgical texts embrace a compendium of jazz styles, from blues to bossa nova. Music for Peace, received with great acclaim, was later choreographed and performed by the Alvin Ailey Dance Theater as “Mary Lou’s Mass.”

The program will also include several of Williams’ jazz instrumental compositions as well as musical tributes to Williams composed by Witkowski. An avid researcher of Williams, Witkowski has presented trio concerts of Williams’ liturgical music at venues including the Kennedy Center, the International Association for Jazz Education conference, and Duke University.

Williams often stated that she wanted to be a force for emotional healing through her music. In the 1960s, Williams, who was always one step ahead of innovations in jazz, began focusing on music composition for the Catholic Church. Her service music inspired Duke Ellington to write his own Sacred Concerts, yet differed from Ellington’s work in that her pieces were meant for use in actual services, rather than solely in concert settings. Williams’ transition to composing for the church marked a seven-year period that corresponded with liturgical changes within the Catholic church. From 1963 until 1970 she composed a number of hymns and three masses that garnered attention within the American Catholic church as well as from the Vatican. In 1975, jazz was played for the first time in New York’s St. Patrick’s Cathedral, when Williams performed her work Mary Lou’s Mass with her trio and a 60-voice youth choir.

Williams wrote and arranged for such bandleaders as Duke Ellington and Benny Goodman. She was considered a major force in the in the birth of bebop and was a friend, teacher and mentor to the pioneering pianists, Bud Powell and Thelonious Monk as well as Charlie Parker, Dizzy Gillespie, Errol Garner and a list of other luminaries of the revolutionary post-Renaissance Harlem. She was one of the first female musicians who opened up the notoriously male-dominated jazz scene to instrumentalists of the opposite gender. Originating from boogie-woogie and blues, her harmonic style was constantly evolving, even leading to a performance in 1977 with the avant-garde pianist Cecil Taylor.

Regarding her deep faith, Williams converted to Catholicism in 1956 and was baptized as an adult at the Church of St. Ignatius of Loyola  (long staffed by Jesuit priests)that happens to be situated on the same block as The Park. Following her spiritual conversion, Williams maintained a strong connection to the Jesuit community throughout her lifetime.

After a European tour in the early 1950s, Williams was deeply conflicted about appearing in clubs and secular venues. For several years, in lieu of performing, she poured her efforts working directly with jazz musicians recovering from drug and alcohol addiction. She also created a charitable organization and opened thrift stores in Harlem, directing the proceeds, along with ten percent of her own earnings, to musicians in need. So in the spirit of Mary Lou Williams, Arts at the Park will give ten percent of this concert’s proceeds to the Jazz Foundation of America, a non-profit organization based in Manhattan that works to bridge the gap between social and medical resources to jazz musicians in need.

Arts at The Park, a component of the Park Avenue Christian Church (known as “The Park”), brings together outstanding performers and ensembles from the greater New York City metropolitan area for programs that enrich and inspire and that touch our shared human story and experience. Arts at The Park include live music, theater, political and theological discourse, and family and holiday events. Artistic Director ofArts at The Park is Paul Vasile.