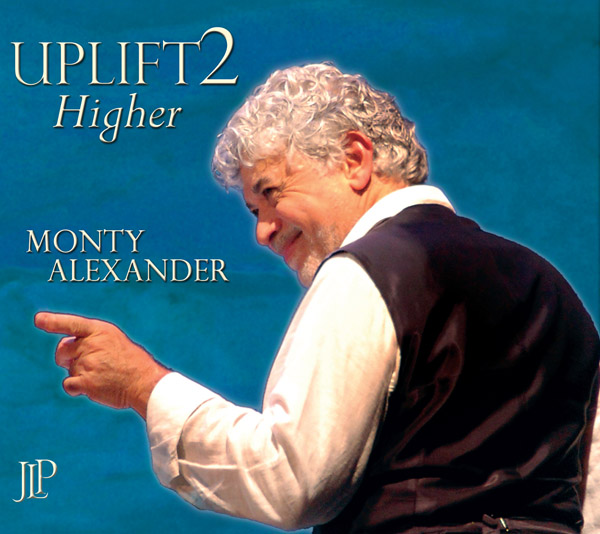 Jamaica is known for the undulating sounds of reggae, but it also contributed mightily to the jazz continuum. Dizzy Reese, Ernest Ranglin, and Harry Beckett are from Jamaica, but perhaps the island’s best-known jazz export is Monty Alexander, a pianist that’s been enthralling jazz fans for decades. Alexander’s 2011 album Uplift topped the JazzWeek chart twice that year—and when JazzWeek charted the most-played CDs of the year, Uplift was #5. Between that CD and Harlem-Kingston Express Live, Alexander has officially dominated the US Radio Charts with three # 1 spots, all in the summer of 2011. Harlem-Kingston Express (Motema, also 2011) was nominated for a Grammy Award in the Best Reggae Album category.

Born in Kingston 1944, the young Alexander took to the 88s as something of a prodigy.One night at age five he had observed a pianist play “White Christmas” in his home at a Christmas party. His mother recalls seeing young Monty playing that same tune with both hands the very next night.  At age eight he took classical piano lessons but he’d already began loving the American jazz and Great American songbook pop (Tony Bennett, Nat “King” Cole) he heard on the radio. As a teenager, seeing Nat “King” Cole and Louis Armstrong perform had a major impact upon him. He’d also become interested in Jamaican music—Alexander would play with Clue J & His Blues Blasters, substituting for their regular pianist Aubrey Adams when he became unavailable. While few could conceive of it at the time, this band would prove to be a major watershed in Jamaican music history, incubating the talents of not only Alexander but Ernest Ranglin, Rico Rodriguez, and Roland Alphonso, all who’d go on to become prime movers in Jamaican ska, rocksteady, and reggae. By the end of 1961, Alexander’s family relocated to that land of opportunity, the USA, where he further honed his skills. While playing with Art Mooney’s orchestra in Las Vegas, he was spotted by a couple of high rollers, namely Frank Sinatra and Ermenigildo “Jilly” Rizzo, singer/show business legend and Sinatra’s pal/aide and New York City club owner, respectively. Rizzo hired Alexander to be the house pianist for Jilly’s Saloon, a notorious hang-out for show biz types, jazz musicians, and assorted other hip clientele. Not only did he accompany Sinatra when he performed at Jilly’s, but Alexander met a jazz legend there that became both a friend and employer, vibes master Milt Jackson (of the Modern Jazz Quartet, who had a parallel solo career). Other singers Alexander has shone behind include Mary Stallings, Ernestine Anderson, Natalie Cole (who asked Alexander to accompany her on her tribute album to her father Unforgettable), Tony Bennett, and Bobby McFerrin. Furthermore, he played with ace of the bass Ray Brown and trumpet titans Dizzy Gillespie and Clark Terry. From the 1970s on, Alexander took the jazz world by storm with a series of internationally well-received albums on the European MPS and American Concord and Telarc labels.

Monty Alexander’s distinctive sound emanates from two sources—firstly, he’s infused the inspiration of iconic pianists Oscar Peterson, Nat “King” Cole, Ahmad Jamal, and Errol Garner with Jamaican sounds past and present. Secondly, and perhaps most crucially, Alexander indubitably loves what he is doing and he communicates that to listeners in an engaging, infectious manner. Talk about having one’s cake and eating it too—Alexander has mastered that concept for the best of both worlds. “I play for me but I also play for the audience…I am even more satisfied when I make people happy.” Alexander has no truck with elitist “artistic” notions—while he doesn’t pander to listeners, he doesn’t place himself “above” them either. “Dizzy Gillespie, Duke Ellington, and Louis Armstrong—these artists reached out to the audience.” Alexander’s latest for Jazz Legacy Productions, Uplift 2—a sequel of sorts to 2011’s Uplift—virtually epitomizes his philosophy and approach to jazz gloriously. Reunited with bassist John Clayton and drummer Jeff Hamilton—with whom he made some of his very best trio recordings in the mid-1970s—Uplift 2 bursts out of the gate with two tunes that, in lesser hands, might come off as corny or clichéd—“Battle Hymn (of the Republic)” and “When the Saints Go Marching In.” But to Alexander, this “familiarity” presents an opportunity he relishes. “I like to take old wine and put it into new bottles,” he says. “It’s not so much the song, but what you do with it.” Alexander’s trio takes these warhorses and renders them with impishly affectionate humor, invention, and gregarious swing. Clayton and Hamilton are the thunder and wind to Alexander’s summertime cloudburst. When asked about the chemistry of this configuration of musicians from long ago—every so often we’d get together”—Alexander affirmed, “We just clicked from the get-go.”

Which is not to sleight Alexander’s “other” trio on this set, Hassan Shakur on bass and Frits Landesbergen on drums. After a tantalizingly angular intro, this Alexander trio swings the standard “St. Thomas” like it was both the first time and maybe the last time they’d have at it—it’s jovial and assertive, breezy and volatile. Ahmad Jamal’s “Night Mist Blues” is a panorama—deep noir mood, rippling piano (echoes of McCoy Tyner?), richly pensive blues feeling, Dave Brubeck-like urbanity, restless but almost celebratory reminiscence, and Shakur and Landesbergen support and stimulate like nobody’s business.

“At the end of the day,” Alexander says, “it’s about touching somebody’s heart.” Uplift 2 succeeds in that spectacularly, while it also takes up residence in the mind (including that region that controls the tapping of your foot). Without fanfare or pretense, Monty Alexander continues to celebrate the aspects of directness and delight in jazz. “It’s a joy and a privilege to come out of the gate and get to the point!,” says Alexander. Need proof? Listen, learn, and love.