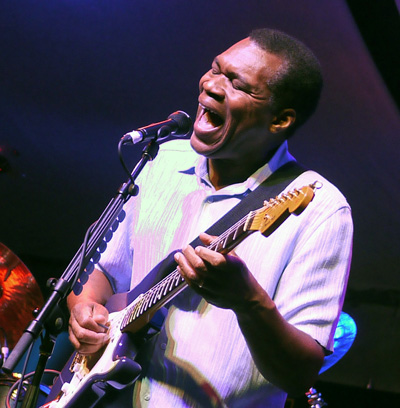 On Monday evening, fans had a few hard choices to make among the headliners. At Koerner Hall, award-winning Dee Dee Bridgewater paid tribute to Lady Day.
Meanwhile at the Enwave Theatre, Kurt Elling took to the stage before an equally enthusiastic audience. The sold-out crowd knew who they were going to see as you could feel it right when Elling walked on the stage. Laurence Hobgood, who has collaborated with the singer for 17 years, was on the piano together with Eric Privert on bass and Peter Van Nostrom on drums.

Kurt Elling selected pieces from his latest album The Gate where he revisits some well-known tunes that might have been placed temporarily on the shelf. Naturally they will have a jazz spin to them with the meaning of the lyrics leading the way. Getting everyone in the mood, the swinging and groovy version of Joe Jackson’s “Steppin’ Out” also included a very brief scat singing moment.

The suave Elling sport a business casual suit was genuinely comfortable on stage. He naturally moved the mic away or closer to his mouth to temper the volume just the way he wanted. Whether singing or speaking, the conversation was always with respect to the audience. His tasteful sense of humour was another bonus of a live show.

Elling then sang the title track of his Grammy-award winning album, Dedicated To You. Hobgood added a solo including a quick nod to the song “Cabaret.” Proving that great singers understand all the rudiments of music including timing, Elling, on his original song “Samurai Cowboy,” doubled-up on vocal drum sounds in tandem with Van Nostrom for added entertaining effect.

Guitarist John McLean came on stage later to bring a rock element and a hard driving solo to the Beatles’ “Norwegian Mood. Elling quipped that songs can have the effect of “making the pain musical” when talking about life. Such was the case with a slow version of Earth Wind and Fire’s “After The Love Is Gone.” The only standard of the evening was Hoagy Carmichael’s “Skylark.” The audience without being prompted snapped their fingers for “Golden Lady” by Stevie Wonder. Elling concluded rightly so: “Hey, that’s a nice night. What do you think?” For effect, the background spotlight on Elling slowly faded out signalling the end of the show for “Save Your Love For Me.” Fortunately, the audience was treated to a second encore with Tom Jobim’s “Luisa” after Elling translated the portuguese lyrics.

Over at the Mainstage Concert, a night of blues was dominated by the Robert Cray Band. Playing selections from his cd Cookin’ In Mobile such as “Sitting On Top Of The World,” Jim Pugh drew particular attention after Cray kept introducing him.