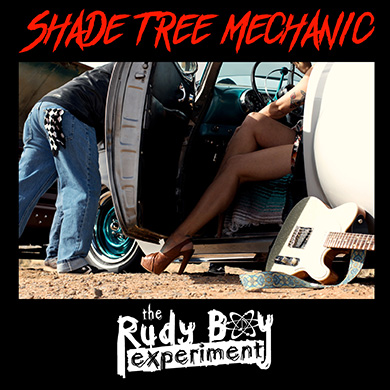 The new project features several tracks produced by veteran producer and guitarist PETER ANDERSON, such as “BETTY LOU” and “HOW MUCH I LOVE YOU”, which will launch with a music video produced by Craig A. Butler.

THE RUDY BOY EXPERIMENT will showcase tracks off their new release, with live appearances Saturday May 18th at the 2019 CRAWDADDY BLUES FEST in Madrid, New Mexico, and Friday May 24th, at the 2019 SILVER CITY BLUES FESTIVAL in Silver City, NM.

“SHADE TREE MECHANIC” debuts for a global release via DSN, Tuesday May 21st, and will be available via digital online, mobile, and streaming services such as Amazon.com, iTunes, Google Play, Spotify, Napster, eMusic and hundreds more worldwide.