Tales of the Unusual, Lorraine Feather 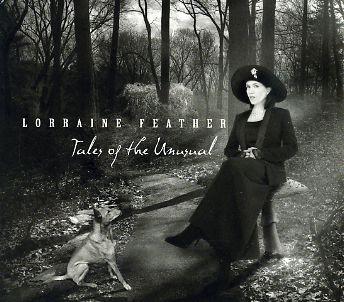 Lorraine Feather’s most recent album, Tales of the Unusual, with full-blown oddness takes listeners even deeper into spookiness than her previous ones suggested. Feather’s interests, which are explored endlessly in movies and novels but not so much in music, involve those known but confined recesses of human personality that everyone possesses but seldom reveals.

Furthermore, Feather’s album is distinguished by the fact that it contains a consistent attitude, musically and lyrically expressed, from beginning to end, rather than a disconnected assortment of standards written by others. It doesn’t hurt that Feather also is an accomplished singer who can negotiate the strange wide intervals that she wrote, as well as being an actress of sorts who can convey emotion in cadenced spoken word (which happens to be, yes, poetry). For instance, the spoken cattiness between two female friends in a chorus of “Five” is as hilarious as Stephen Sondheim’s lyrics for “The Ladies Who Lunch,” though “Five’s” conversation depicts instantly recognizable characters of completely different personalities from Sondheim’s.

And who else would provide more inspiration for the far side of the human personality than Rod Serling, creator of The Twilight Zone, a series from the late fifties and early sixties that supplied ideas for a generation of movies and television shows (which should be available on TV as readily as I Love Lucy). Feather pays tribute to “a wondrous land whose boundaries are that of imagination” by lyricizing about one of the less-remembered shows, “Where Is Everybody?” a study in the debilitating effects of unremitting solitude. Singing eerily about a “maniac loose in town,” the song nonetheless remains accessible and hummable, a fact made evident by Grant Geissman’s luminous short guitar solo and violinist Charles Bisharat’s inviting introduction and conclusion. Yet, who would hum a song of eerie glissandos and hushed hip-hoppish exclamations that bring to life “that woman with the frozen grin…a manikin” and repeats “the number you have dialed is not a working number”?

If the title of one of her songs remains in your head even after the track ends, it’s because Feather knows a good hook when she sings one. Cannily, she chooses an unforgettable phrase to repeat, not ad nauseum, but ad delectibilis, and there’s a point to the repetition. “Get a Room,” not only a song title but the thrice-asserted demand at the end of each chorus, demonstrates the subjects’ mutual attraction that’s obvious, not to them, but to everyone else who yells “Get a room!” The room resisters deny their longing until, with theatrical concluding irony, they too ask “if there’s a way we can get a room get a room get a room.” Feather’s reference to James Carvill and Mary Matalin does raise the question of whether references to current personalities date a possibly immortal song, as in “I’ve been consulted by Franklin D / Even Garbo had me to tea.” But for the moment, let’s enjoy Feather’s swinging narrative.

As far as the results of repetition go, Feather’s re-recording of “Five” (which previously appears on her album, The Body Remembers) demonstrates the torturing effects of obsession. This time, the number 5 pushes people to the edge, as a little girl insists “I can count to five” not once, but at first six times, and the manically thirteen times, to her mother and her mother’s friend, even as the girl counts her five toes and her five braids on the fifth track of the album. The faux innocence is reminiscent of The Family Guy’s promotional spot showing a little boy calling endlessly to his sleeping mother “Ma Ma Ma Ma Ma Ma Ma Ma Ma Ma Ma Ma Ma Mama Mama Mama Mama Mama Ma Ma.” When she shrieks, “WHAT?” the boy innocently smiles and says quietly, “hi.” The “Five” girl provides the character for Feather’s lesson in the requirement for a parent’s infinite patience…or else madness may occur.

Other strange references abound in Tales of the Unusual, including an insouciant country/western-like recollection of the now classic movie, The Usual Suspects, in which nothing is as it seems as Kevin Spacey says “everything but nothing at all.” And then there’s Feather’s affinity for the ominous atmosphere of The X-Files, in which extraterresial things could happen, as she notes in “Out There,” where “the world we travel grows darker by the day.” Feather’s imagination runs wild when she considers in “Off-the-Grid Girl” the possibilities of a “very scary” Washington State island where there are “rats as big as cats” eaten by inhabitants and “a nasty nest of rattlesnakes.”

Musically, Feather adapts pieces by composers whose haunted and haunting sensibilities match her propensity for the unusual. Such as Edvard Grieg, whose nocturne (Op. 54 No. 4) she adapts to a peaceful minor-key detailed meditation upon the hatching of “Cowbirds”. Or Nino Rota, whose “Rosa Aurata” Feather adapts to allusions of circus freakiness, with a mood like that of “Is That All There Is?” Or Enrico Pieranunzi, one of the great jazz pianists of this generation, when Feather’s lyrics to “I Took Your Hand” supply a story of frustrated attraction at a ball to the vertiginous whirl of Pieranunzi’s waltz. Or Duke Ellington, whose “Jubilee Stomp” provides the occasion for Feather’s reworking of “Indiana Lana,” a tongue-twisting vocalist’s workout about a little girl who runs the Indianapolis 500 on foot, and wins, as tempos quicken with each chorus.

The success of Feather’s work arises as well from the arrangements and/or accompaniments of Shelley Berg, Russell Ferrante and Eddie Arkin, who share Feather’s penchant for the mysterious. Ferrante sets up the cinematic adventure of “The Hole in the Map” with his silent movie-like right-hand tremolos and arpeggios over bass-clef melody before Feather sings her story of creepiness found by someone lost in a jungle of hanging boa constrictors and more. And the duo of Feather and Berg animate the thrills of super-fast “Indiana Lana” with super stride. In fact, Feather adapts the musical style to the requisites of her song, merging narrative and singing into unanticipated varieities of genres such as country swing, Memphis blues or ragtime.

Feather once again proves herself to be a singer who takes chances—and who has fun while she does it. Tales of the Unusual, like, say, Halloween, examines the dark side of human interests but still contains elements of drama, risibility and mystery that remain forever intriguing.