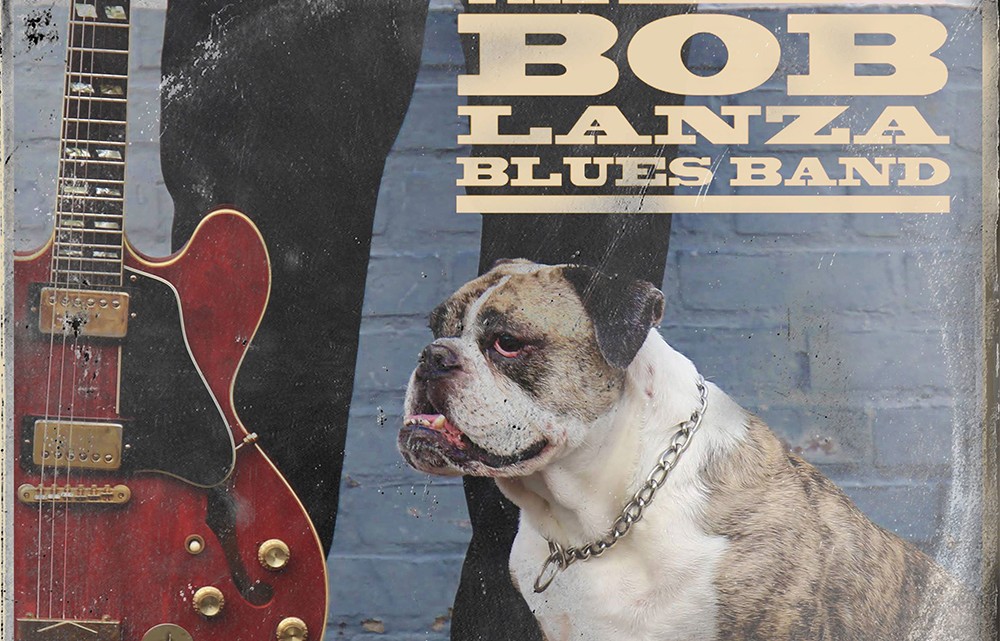 Bob and the band will celebrate the new album’s release with a special CD party and show on Saturday, September 29, at the legendary Stanhope House, 45 Main Street, Stanhope, New Jersey.

Kids, Dogs & Krazy Women has been a long time coming. Working with acclaimed producer and performer, Anthony Krizan (Spin Doctors, Noel Redding, Lenny Kravitz), at his Sonic Boom Recording Studio in Raritan, New Jersey, Lanza delivers a mix of covers and originals, done only the way he can do it. The album also includes a tribute to the late, great harmonica master, James Cotton, penned by Lanza and Krizan.

Lanza has known Krizan for many years, but had never gotten the opportunity to work with him until now. “It’s a no brainer,” he says, about working with Krizan. “I’ve known Anthony since 1990. Thru the years we crossed paths many times, as I watched his career as a performer and producer soar, and I always thought about what doing a record with him would sound like.”

As fate would have it, the two would hook up on a landscaping job. They were doing labor for a mutual friend, who said he would love to hear Anthony and Bob playing together. With that thought in mind, they both continued with their respective bands, doing gigs around the area, crossing paths here and there. Two years later, this past March, the two guitarists would end up on the same bill, a fundraiser for the Jersey Shore Jazz and Blues Foundation. A resulting jam at the end of the show presented the opportunity for them to play together, and it sounded as if they were playing together for years. “That day I asked Anthony if he’d be interested in recording us,” Lanza recalls. Krizan didn’t hesitate and two weeks later, Lanza would bring his rhythm section, Vin Mott and Dave Lockhart, to Sonic Boom Recording Studio.

“Right from the start, we knew we had some great stuff going on,” says Lanza. Joining the two guitarists are John Ginty on Hammond B3 organ and piano, Vin Mott on harmonica and drums and Dave Lockhart on bass. The session resulted in some real raw blues, with Krizan adding haunting slide guitar, pushing Lanza’s guitar playing and singing to another level.

“John Ginty is a good friend of Anthony’s and I opened up for him a few times over the years, so we called him in,” Lanza remembers. “He is one of the world’s foremost Hammond B3 players, and his piano playing just cooks on this disc. To have him on this session was an honor, and it bought the session to another level.”

Ginty had this to say about the sessions: “The best part of the New Jersey music scene is how small and connected it is. I’ve been on the same bill as Bob Lanza for many years, and it was always a thrill to hear him play live. I’ve also been making records at Anthony Krizan’s Sonic Boom Studio for years. Now, playing on Bob’s new album has been a thrill, and it sounds incredible and authentic. Great blues records are made here in New Jersey, and this is certainly one of them.”

Kids, Dogs & Krazy Women is raw and real, and delivers the blues from the heart, soul and the gut. “Bobby Lanza is the real deal and a true bluesman,” says producer Krizan. “He plays guitar with fire and emotion; on top of that, his voice and songwriting abilities are stellar, as well. We tracked this record live with no studio tricks to masque the rawness of the session. You can feel the energy on the tracks and you can feel the band laying it down together in the room! We used all old-school recording equipment, like ‘60s Neve pre-amps and Olympic modules and we used all vintage guitars and amplifiers!”

Amplifiers were everywhere: Krizan’s coveted 1964 Super Reverb, as well as two old Gibson amps, are on full display on this disc. In the guitar department, Lanza’s 1966 Gibson 345 and his 1968 thin line Telecaster, along with Krizan’s TV yellow 1960 Les Paul Special (responsible for the killer slide work on the title cut) and some choice vintage Telecasters all make their presence known. “Man, Anthony really hit the note on that one” says Lanza, referring to the slide solo on the title cut.

Kids, Dogs & Krazy Women will stoke your mojo for old school rhythm and blues. Lanza and Krizan make a formidable team on this recording, blending swampy blues and roots music effortlessly, as if they were meant to be together. “I think this record will stand up to what’s happening right now, as well as standing with some blues classics,” says Krizan. “Doing this record was a lot of fun and I hope listeners can tell how much, from the sound coming out through the speakers.”

The songs on this disc stay in your head for days after listening, a true testament to the musicians involved and the vibe that went on inside Sonic Boom Studio during the sessions. “I’m very excited about this release,” Lanza summarizes. “It just seems so right to finally record with Anthony and hear the results that came from sessions that we all had so much fun doing.”