Ukraine Tour Coincides with The SRI Jazz Release of the Best of Ray Brown Jr. 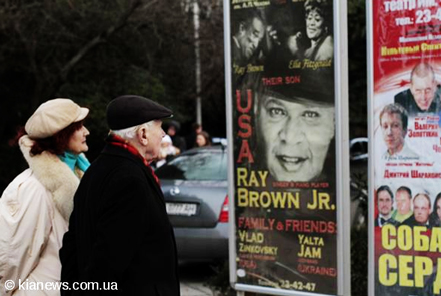 Following a smashing success from his Ukrainian Tour, SRI Jazz Releases the long awaited “The Best of Ray Brown Jr.”

Ray Brown Jr’s recent tour in the Ukraine,  a smashing success for the artist, which included starring in Jazz Festivals, concerts and television interviews, coincides with the SRI Jazz  release of ”The Best of Ray Brown Jr”. The tour was originally only scheduled to be comprised of a few shows but due to the response of his fans there, Ray was held over for many additional shows in multiple locations all over the Ukraine. Ray found his tour both challenging and enlightening saying, “Jazz is, like everywhere else in the world, not the flavor of the month. The jazz lovers like elsewhere in the world, the jazz lovers here in the Ukraine love their jazz and their jazz men and women.”   Anton Khromchenko, one of the Yalta Jazz Fest organizers and an internationally known violinist said, “I thank my lucky stars that Ray Brown Jr was in Yalta, and that our group is on the same stage as the famous Master.  All the people on the scene felt his presence, they felt his energy and spirit and the spirit of Jazz music.”

The talented and stylistic vocalist, Ray Brown Jr performed to enthusiastic fans all over the Ukraine which also included being on the cover of magazines and featured stories on Ukrainian television. The end of his tour coincides with the release of an album packed with classic Ray Brown Jr. fan favorites. “The Best of Ray Brown Jr” follows the critically acclaimed “Friends And Family” album, an album of all duets, which has been very popular on radio as well as with fans and critics. “The Best of Ray Brown Jr” includes such hits as, “Sunny Side Of The Street” with the late James Moody, “Misty”, “Can’t Take My Eyes Off Of You”, a duet with the sultry Jane Monheit, “Cheek To Cheek”,  and much more. The album is being released digitally first and will be followed by both CD and vinyl versions at retailers worldwide.

Ray Brown Jr, Jazz Singer is the son of Ella Fitzgerald and bassist Ray Brown. His mom was arguably the finest female jazz singer of all time while his father, a jazz giant, played with Dizzy Gillespie, Charlie Parker, Bud Powell and Oscar Peterson.

SRI Jazz is part of SRI Label Group which provides quality, new and classic Blues, Jazz, Country and Rock & Roll by major artists past and present  on its various labels.  The SRI Label Group consists of Flamingo Jazz, Golden Shellsongs Music Publishing, SRI Entertainment, SRI Jazz and SRI Records. As one of the first websites on the internet to offer great music, www.srirecords.com established itself as a pioneer offering music on the web since 1998. With industry veteran Shelly Liebowitz at the helm over the last 15 years, SRI has strived to provide a standard of excellence in the world of music.

For additional information contact Shelly Liebowitz via email at shelly@srirecords.com or by phone at 818-299-6297.