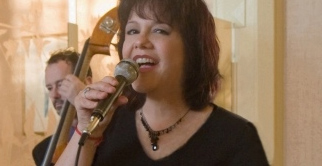 Weaving an informative narrative into a well-paced performance, featuring some of Ms. O’Day’s most popular songs, jazz vocalist Vicki Burns pays a loving tribute to one of her greatest musical influences.

Vicki Burns is a jazz singer who has been delighting audiences for years. A vocalist with impeccable taste, a sure sense of rhythm and a glorious tone, she infuses each song with heartfelt expression, digging into the lyrics and melody for their richest interpretation. No wonder the great jazz drummer; Max Roach once described Vicki’s singing as “a gold mine”!

Some of Vicki’s performing highlights in New England include: singing with the great jazz drummer, Alan Dawson, for the Martin Luther King Jr. “Journey into a Dream” Concert series in Boston and opening for Billy Taylor and Max Roach in the “Bright Moments” Concert series in Amherst, MA. She has performed regularly at these Boston area jazz clubs: Ryles, 1369 Club, the Starlight Roof and the Turtle Café. She has also been featured on “Music America”, a syndicated WGBH broadcast hosted by Ron D’Ella Chiesa.

While still a student, she sang with a popular big band, The Clayton Poole Jazz Orchestra and was chosen by John Coltrane’s biographer Bill Cole among others for the New England Touring Arts program.

On the West Coast Vicki has performed at Garden City in San Jose, The San Jose Museum of Art’s “Women in Jazz” series and a featured spot in the San Jose Jazz Festival,The Great American Music Hall with the Oakland Jazz Choir, Kimball’s East with Madeline Eastman and the Oakland Jazz Choir and the Fillmore Street Jazz Festival . She became a favorite performer at Enrico’s San Francisco’s acclaimed beatnik haunt, establishing a firm fan base which included the infamous Carol Doda. She was featured at Yoshi’s with flautist Nika Rejto and at the Plush Room where she collaborated with acclaimed pianist, Ken Muir noted for his long association with Paula West.

In 2005, Vicki released her debut CD which features original music, lyrics and arrangements of both familiar and rare standards. Entitled Siren Song it is produced by Vicki and the acclaimed flugal hornist, Dmitri Matheny, who also arranges some of the material. Matheny described her voice as a “wonderful, rich instrument”. Jazz critic Dan Ouellette said of her debut recording that she “succeeds with rapturous, mystical beauty”.

In February of 2009, Vicki released a second CD, Vicki Burns Quartet: Live At Anna’s Jazz Island. Receiving broad critical acclaim and airplay, it has served as a delightful introduction to the New York City jazz scene where she now finds herself. Recently, she has performed to enthusiastic audiences at Birdland, The Iridium Jazz Club, Zinc Bar, North Square, Zeb’s Jazz Vocal Series and now the Metropolitan Room!

”Vicki Burns has a limitless future. Her very attractive voice, versatile style and infectious delivery combine to give her her own memorable sound.” Scott Yanow