Watkiss wows the crowds with his Song Diasporas 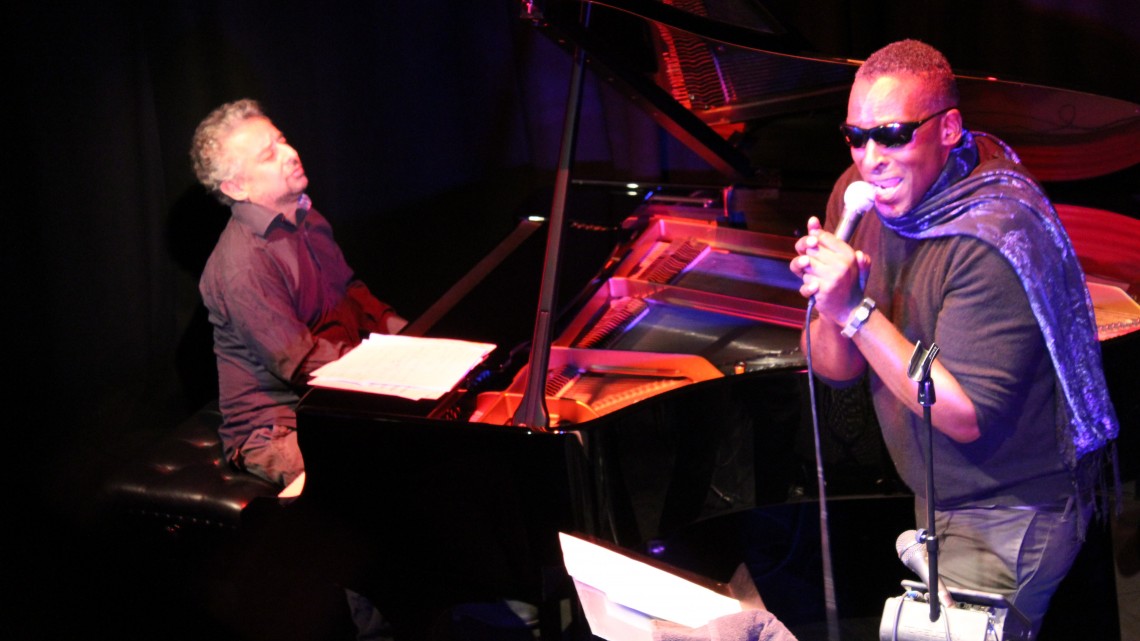 Review and photographs by John Stevenson

The occasion was the launch of the CD, Song Diasporas, co–created by himself, pianist Jonathan Gee and acoustic bassist, Larry Bartley.

Song Disaporas  undoubtedly illustrates the amalgam of influences which he has picked up over a long and triumphant artistic career. Kicking the set off with a wistfully rendered Bob Marley classic, ‘Turn Your Lights Down Low’, he demonstrated his versatility to an enraptured audience and then took them to Northeastern Brazil via an exquisite version of Gilberto Gil’s ‘Eu Vim Da Bahia’.

At times wearing a pair of stylish shades with a glitzy blue scarf fitted gamely over his shoulders, Cleveland was the quintessential jazz hipster – declaiming, scatting and pelting down lyrics in a thoroughly entertaining fashion. One of the highlights of the gig was Cleveland’s theatrical interpretation of David Bowie’s ‘Space Oddity’, aided and abetted by an instrumental mood tellingly created by Gee, Bartley and guest alto saxophonist Klaus Bru. This was high drama, holding the audience spellbound, reminding them of his great success at jazz opera in recent years – in Julian Joseph and Mike Phillips’ Bridgetower and Shadowball.

Born in East London to Jamaican parents, Cleveland was a co-founder of the critically acclaimed Jazz Warriors big band. He went on to produce well received albums of his own, including Green Chimneys (Verve), Blessing in Disguise (Polydor) and Victory’s Happy Songbook (Touchdown Soundz). He has performed and recorded with a remarkably diverse range of artists over the past 35 years including Bob Dylan, Sly & Robbie, the Royal Philharmonic Orchestra, Julian Joseph, Pete Townshend, Branford Marsalis, Soul 2 Soul, The Who, Stevie Wonder, Talvin Singh, Bjork and Robbie Williams among many others.

Cleveland took his audience into his various soundscapes and down nostalgic highways, limning evocative insights from timeless melodies such as ‘You To Me Are Everything’ (The Real Thing); ‘Angie’ (The Rolling Stones) and Gabriel Faure’s ‘Sicilienne’/’For Whom My Heart Sings’.

Next post Alicia Olatuja performs at Harlem Stage on November 18