Yoshi’s Presents Lua Hadar And Her Cosmopolitan Jazz Ensemble, TWIST, With The Official Release Of Their Indie Music Award-nominated DVD, “Like A Bridge” 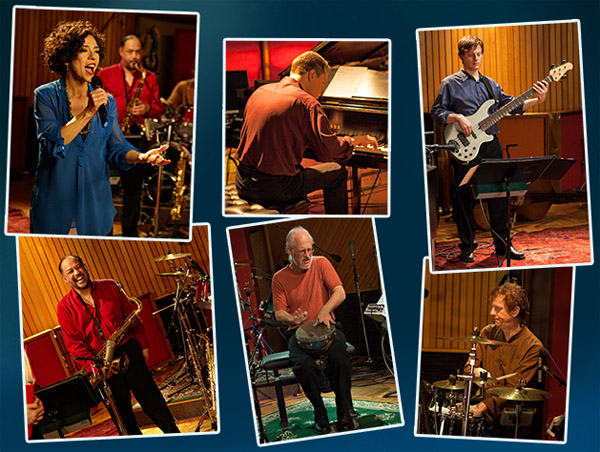 San Francisco, September 1, 2013: Fresh from a success in Paris, Lua Hadar brings her cosmopolitan jazz ensemble Twist back to Yoshi’s Oakland to celebrate the Official Release of their DVD, “Like A Bridge.” A 70-minute Live Studio Concert directed by Emmy award-winner Lawrence Jordan, “Like a Bridge” was shot at the legendary Fantasy Studios in Berkeley, and was nominated in the Long Form Video Category by the Independent Music Awards. On September 30, clips from the DVD will be shown on Yoshi’s new screen as the band rolls out some fresh new tunes live on stage. Music Director Jason Martineau on piano, Dan Feiszli on bass, Celso Alberti on drums, Ian Dogole on Global Percussion, Larry De La Cruz on reeds, and Hadar on vocals in seven languages.

“Why do I sing such an eclectic song list?” Hadar asks.“I want the audience to get the feeling that humanity shares common struggles and joys, that we are all united. As a group, these songs in languages of five continents are bridges from us to our audience. We hope that we can each be to one another ‘like a bridge.’”

Media representatives may obtain a review copy of Like a Bridge CD or DVD by contacting info@luahadar.com.

ABOUT LUA HADAR with TWIST and Like A Bridge DVD:
Cosmopolitan jazz ensemble Lua Hadar with Twist performs international standards with a different ‘twist’ on style; also presenting original and rarely performed songs in several languages.

The DVD Like A Bridge includes a full length concert with the 13-piece ensemble directed by Emmy-winner Lawrence Jordan, plus in-depth backstage material about the making of the project.

ABOUT YOSHI’S JAZZ CLUB
Yoshi’s Jazz Club and Japanese Restaurant is one of the world’s most respected jazz venues and has won a reputation as the San Francisco Bay Area’s premier location for great food and the best jazz. Yoshi’s has hosted hundreds of legendary jazz greats such as Betty Carter, Max Roach, Dizzy Gillespie, Joe Williams, Diana Krall, Branford Marsalis, McCoy Tyner, Harry Connick Jr. and Oscar Peterson, who said, “Yoshi’s Oakland is the greatest jazz club in the world.”

LUA HADAR, Vocals, Executive Producer.
A unique and original vocalist with a soaring range, Lua interprets an eclectic song list with a charming, swinging delivery, as well as passionate commitment and humor. She has been molded by cultural exchange experiences in places as diverse as Bali, Russia, Switzerland, Japan, Thailand, France and Italy. Since its inception in 2007, Hadar’s band TWIST has developed a reputation for twisting the style of international standards, performing original numbers and expressing our common humanity through songs in 7 different languages. Lua has charmed audiences at such noted jazz clubs as Yoshi’s and The Iridium to Bangkok’s Thailand Cultural Center and the Swan Bar in Paris, where she just appeared in a June return engagement. www.luahadar.com

JASON MARTINEAU, Musical Direction, Arrangements, Piano.
Dr. J is the cornerstone of TWIST, as music director, principal arranger, pianist and bandleader. He’s also an award-winning composer, instructor and author, holding graduate degrees from the San Francisco Conservatory and Manhattan School of Music. Jason works in many different idioms and styles, and since 2005 has recorded three albums with Lua Hadar, performing with her in the San Francisco Bay Area, Los Angeles, New York, and at the 10th International Festival of Dance and Music in Bangkok, Thailand. www.jasonmartineau.com

DAN FEISZLI, Bass, Mixing Engineer.
Experienced on both upright and electric basses, in styles of music ranging from jazz and Latin to pop and rock, Dan Feiszli anchors TWIST with versatility and panache. As a recording engineer, he has mixed albums reaching as high as #4 on the U.S. Top 40 Jazz Radio Charts. Dan did the mixing for Like A Bridge at his studio in El Cerrito, California, employing both his fine musicianship and his excellent technical skills. www.studiorhythm.com

CELSO ALBERTI, Drums.
Celso was born in Curitiba, Southern Brazil. The driving rhythms of his country’s music led him to develop an early interest in the drums and by the age of 17, he was performing regularly as a professional. In 1982 he expanded his musical horizons with a move to the U.S., where he has been living since, working with top performers both as a drummer and as an audio engineer. Celso’s dynamic drumming style blends traditional Brazilian music with World and Rock influences, providing TWIST with exciting flair and a rock solid base. www.celsoalberti.com

IAN DOGOLE, Global Percussion.
As a major in Ethnomusicology at Brown University, Ian delved deeply into the indigenous music cultures of the planet, while maintaining his fascination with the evolution of Jazz and began to crystallize his vision of Global Fusion Music, blending the forms and instruments of Jazz with those of the non-Western world. Ian has released six audio recordings as a leader/producer and has recorded and performed widely with artists from Peru to the Sudan with his band Hemispheres. He brings an authentic world beat to TWIST with percussion including udu, cajon, shakers and dumbek. His new double CD, Outside the Box, was released in April 2013. www.iandogole.com

CANDACE FOREST, Co-Producer-Pianist-Singer-Composer.  Candace has co-produced three CD’s, the Like A Bridge live recording project and numerous live concert and educational events with Lua Hadar. Candace’s own compositions range from works for solo, ensemble and orchestra to full-length dance and theatre pieces including Viva Concha! Rose of the Presidio and All In This Together, a symphonic program premiered by the Buffalo Philharmonic Orchestra. Her song, Come Back To California, dedicated to French bassist Albin Suffys, received it’s U.S. premiere with Lua Hadar and Twist at Yoshi’s in March 2012 and appears in the Building Bridges Documentary. www.candaceforest.com

GUEST ARTISTS ON THE DVD

DAVID MIOTKE, Jazz Accordion . Dave brings his unique jazz accordion sound to the band’s French songs, such as La Mer, with authentic color and skilled playing. He is a multi-talented singer, pianist, accordionist and composer, performing solo and with musical groups in styles as varied as jazz, cabaret, tango, Italian, strolling strings and classical. Dave holds music degrees with honors from Northwestern University and was a founding member and high lead singer/keyboardist with the well-known 60’s rock band, H. P. Lovecraft.

FUMIKO OZAWA, Koto.  Educational collaborations with Japan have introduced Lua to koto player Fumiko Ozawa, who this past year made her koto orchestra debut at San Francisco’s Herbst Theater. Fumiko started studying koto in 2004, with Mrs. Masazuka Sato, Head Master of Seiha Music School of Japan and USA. Fumiko obtained her teaching credential for koto music (Jun-Shihan, associate level) from the Seiha Music School in Tokyo, 2009. She guests with TWIST on their interpretation of the Japanese 1963 pop classic Ue o muite aruko, honoring the dignity of the Japanese to “walk with their heads up’” after the devastating earthquake and tsunami of March 2011.

EMIL MILAND, Cello.  Emil made his Carnegie Hall debut in 2010 with Frederica von Stade in her farewell recital. In the same week he made his jazz debut with TWIST at New York’s Cornelia Street Café, and has contributed to Like A Bridge on the mystical Tom Jobim song, Imagina. A champion of new works for cello, he has given premieres of music written specifically for him by such composers as Ernst Bacon, David Carlson, Andrew Imbrie, Lou Harrison, Jake Heggie and Dwight Okamura. As a member of the San Francisco Opera Orchestra since 1988, he has collaborated with many famous singers in recital.