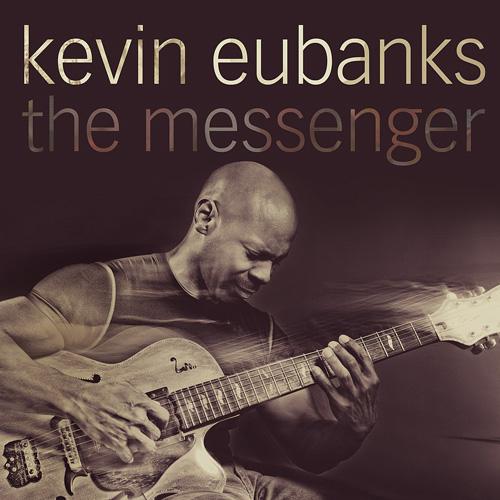 With his second Mack Avenue Records release, The Messenger, acclaimed guitarist Kevin Eubanks continues to explore his own unique musical vision. This vision offers the listener an opportunity to share a musical journey that truly exemplifies where Eubanks is at this stage of his illustrious career; one that, for over three decades, has seen him incorporate into his creative process a willingness to embrace the broad spectrum of his musical experience, while continuing to seek out new vistas.
The Messenger is a project that reflects not only the guitarist’s virtuosity on his instrument, but also his impressive compositional skills—writing all but two tracks. Best described simply as a “Kevin Eubanks” recording—without specific categorization—as his intent with The Messenger is to communicate the breadth of his artistic influences. “I wanted to branch out a little bit more on this recording,” Eubanks states. “I didn’t want to be as concerned with the ‘jazz sound’ as much; I wanted to let out a little bit more of what I’ve been musically exposed to.” Eubanks compares this philosophy to sports: “It’s like with professional athletes; most of those guys can play three or four sports. Society makes you choose one or the other. But that doesn’t change who you are inside,” or in Eubanks’ case, preventing him from showcasing his versatility on this album.

From the infectious groove of the title track that begins the program, the guitarist gives notice that a unique listening experience is on the way. This album is: reflective—“Sister Veil,” “Queen Of Hearts,” “Loved Ones,” “The Gloaming”; funky—“JB,” a nod to James Brown; “Led Boots,” a Jeff Beck tune; and John Coltrane’s “Resolution,” from A Love Supreme; and bluesy—“Ghost Dog Blues.” One of the funkier tracks on this recording is Eubanks’ arrangement of “Resolution” (with a vocal bass line sung by Alvin Chea of Take 6). “With ‘Resolution,’ I didn’t want to be blasphemous, with people saying ‘Oh, no, he didn’t’,” Eubanks laughs. “But I’m thinking, you know, that maybe Trane might dig it!” As for the blues: “I like playing the blues; I like to sit in and jam with Buddy Guy at his blues club in Chicago. If I had the opportunity, I’d play a lot more blues.” These particular tracks provide Eubanks and his band with an opportunity to stretch out and essentially just jam. Eubanks ultimately reflects, “We wanted the groove to take over; also, those tunes will be fun to do live, and people will be able to sit in.”

Eubanks is joined on most tracks by his sterling fellow quartet members: Billy Pierce on reeds, Rene Camacho on bass, Marvin “Smitty” Smith on drums and Joey De Leon, Jr. on percussion. This project also has a family flavor, featuring younger brother Duane on trumpet (“Sister Veil,” “JB,” “420”), and older brother Robin on trombone (“JB,” “Queen Of Hearts”). For Eubanks, in addition to his brothers making valuable contributions to this recording, their involvement is representative of something more. “Their participation came about through some conversations that we’ve had, and I asked them if they’d like to be a part of the record. We’ve actually been talking about doing a family project for years, so their participation is really an entry to that.”

Perhaps The Messenger’s most distinctive element is its broad sense of musicality. This is certainly, in part, attributable to Eubanks’ experience with leading The Tonight Show with Jay Leno band for so many years. But it is much more than that. Eubanks’ prestigious tenure there is probably more indicative of a situation that was a perfect fit for his musical personality. As Eubanks views it, ‘‘to me, it’s all just music.”
For this album, it was important for Eubanks not only to embrace his musical philosophies, but also to reflect the common thread that exists throughout all of contemporary music; for example, the aforementioned rhythmic, funky, groove-oriented nature of several tracks on the project. “I love playing funk; I grew up playing it. The ‘Motown Sound’? They were jazz musicians! If I had played ‘420’ for some cats who are real ‘funkateers,’ they’d say, ‘Whoa, I hear some Sly [Stone] in there, and I’m thinking, ‘Ok, it looks like I’m good to go.’ It felt good and very natural to me. As jazz musicians, we can play anything.”

The Messenger is Eubanks’ testament to being musically honest. It’s a realization of what he feels is particularly important at this point of career and his life. “I feel that I’m at the point where I just have to be me,” he says. “I want to do what has the most immediate honesty, and just lay it out.” Throughout the album there is a feeling of exploration and revelation that invites the listener in. The guitarist never ceases to surprise, creating a program reflecting that honesty—offering a full range of moods, textures and tempos.
With this album, Kevin Eubanks takes another step in his evolution not only as a guitarist and composer, but also as a musical communicator. It’s his way of making a statement about his personal view regarding the musical spectrum and its place in our lives, with sincere ideas of spreading the word to others. Arriving at the name of the title tune, Eubanks explains, “There is an urgency about it; it has the energy of a message that really should get across. The Messenger, I feel, is in everyone. We’re at the point [in our lives], that whatever it is that you feel strongly about, that can help a person or persons that you love, or a situation that affects your life…you should let that message out”.
By adding another sterling recording to his outstanding repertoire, Eubanks has done just that—let his message out. The Messenger is a project that not only showcases the outstanding technical facility from the guitarist and his bandmates, but also is full of music that is soulful and energetic, as well as emotive, earthy, with a touch of the blues. And for Kevin Eubanks, it represents a message successfully delivered.  Get Your Copy Here