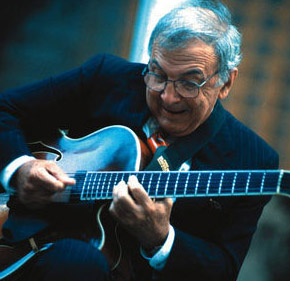 Frank Vignola is one of the most extraordinary guitarists performing today, whose stunning virtuosity has placed him at the side of artists ranging from Les Paul to Madonna, Ringo Starr to Wynton Marsalis. With a mind-boggling repertoire that defies categorization — and a showmanship that could charm birds from the trees to come in and pull up a chair — the man’s fingers fly at the speed of light, zooming from the gypsy jazz of Django Reinhardt to the hot rock of Frank Zappa.   http://frankvignola.com/

“PBS should do a Nature special about guitarist Frank Vignola. How many extra fingers is he hiding – and why do they make hummingbird wings seem tortoise-like by comparison?” —MorristownGreen.com

For more than seven decades, the legendary Bucky Pizzarelli has had a stellar career. “The complete jazz musician”, he was a fixture in jazz and the studios since the early ‘50s. The list of big bands and vocalists with whom Bucky has performed and recorded reads like a veritable Who’s Who of Jazz. One of the era’s most solid rhythm players, Pizzarelli was in high demand, playing and touring with Benny Goodman, Zoot Sims, Bud Freeman, and Stephane Grappelli, and, later, recording with George Van Eps, Carl Kress and George Barnes. His superior mastery of the seven-string guitar is unparalleled.

Hailing from New York City guitarist Vinny Rainolo has been a long-time collegue of Frank Vignola and has shared the stage with many guitar greats like Bucky Pizzarelli, Gene Bertoncini, and Tommy Emanuelle to name a few.