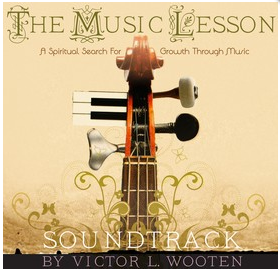 VIX RECORDS TO RELEASE THE SOUNDTRACK TO “The Music Lesson:  A Spiritual Search for Growth Through Music” via compass RECORDS DISTRIBUTION on april 30, 2013

NASHVILLE, TN—March 20, 2013–Five-time Grammy® winning musician VICTOR WOOTEN will release the soundtrack to his audio book The Music Lesson:  A Spiritual Search for Growth Through Music (Tantor Audio) on VIX RECORDS via Compass Records distribution on April 30, 2013.  This will be the first time it has been made available on CD.

The print edition of the book is available in 4 languages and is being used in curriculums in universities, high schools and learning institutions around the world.   In spring of 2011, the audio book version, available on CD and as a digital download, was a finalist for a prestigious Audie Award in the “Personal Development” category.

The primarily instrumental soundtrack features 31 original tracks of music as scored and performed by Wooten.   Additional musicians on the recording include Béla Fleck, Roy Wooten, Joseph Wooten, Howard Levy, Michael Kott and Federica Pena.  Once again, the recording is a showcase for Wooten’s writing and scoring capabilities.

While Wooten is most recognized for his contributions to Béla Fleck and the Flecktones, his solo efforts and his collaborations with folks such as Stanley Clarke, Bruce Hornsby, India Arie, and Dave Matthews have led him to be regarded as one of the greatest bass players of all times, revered by his fans and his peers alike for his uncanny skills on bass.  He has been featured on the cover of Bass Player Magazine four times!

Continuing in his unique fashion of delivering musical innovation and thought-provoking compositions, Wooten delivered two new CDs in September of 2012:  Words and Tones, a collection of 14 tracks featuring various female vocalists and the instrumental Sword and Stone.  The CDs represent the various sides of Wooten’s approach to music, performance and songwriting, highlighted, of course, by searing bass solos that will boggle the mind and definitely satisfy those that thrive on Wooten’s musical as well as technical skills.

For more information go to: