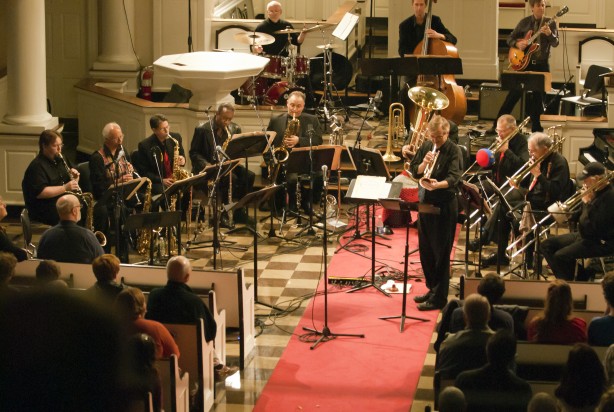 The December 12 event will mark the 50th anniversary of Duke Ellington’s Sacred Concerts. Premiered in late 1965, these concerts marked a new direction in Ellington’s career, presented in churches, cathedrals, and synagogues around the world, a legacy continuing to the present day.

Aardvark’s December 12 concert will be a jubilant evening of Ellington sacred repertory, including Come Sunday, Tell Me It’s the Truth, A Song for Christmas (by Billy Strayhorn), Almighty God Has Those Angels, The Shepherd Who Watches Over the Night Flock, It’s Freedom, and the Duke’s portrait of the Three Wise Men in a movement from his Three Black Kings suite.

Proceeds of the concert will benefit Community Works, a coalition of Boston-area service organizations working for education, health care, housing, and social justice for communities in need.

Aardvark has been performing Ellington’s music for more than 25 years and has released a recording titled Duke Ellington/Sacred Music (“the spirit of the music swings to the rhythmic muse of the great composer” – Cadence Magazine, and “lush sonorities and a saxophonic blend worthy of Duke’s finest reed sections” JazzTimes). Boston’s Emmanuel Church hosted a performance of the Second Sacred Concert by Duke Ellington and his Orchestra in 1969. Mark Harvey served as consulting producer for the Sacred Concert presented by Mercer Ellington and the Ellington Orchestra in Boston at Symphony Hall in 1988 and has lectured and written about this music.

The Aardvark Christmas Concert has been a Boston holiday tradition for more than four decades. Aardvark gave its inaugural concert December 23, 1973 at the Church of the Covenant in Boston as a benefit for the Chelsea Fire Fund. Every year since then, the band has held a Christmas concert to support a deserving cause. Past beneficiaries have included Doctors Without Borders, American Friends Service Committee, Rosie’s Place, Pine Street Inn, Community Works, and dozens more.

Founded in 1973, The Aardvark Jazz Orchestra is one of the longest-running large jazz ensembles in the world. The band has given premieres of more than 175 works for jazz orchestra, performs widely, and appears on 13 CDs, including 7 discs from Leo Records, one of the world’s leading adventuresome music labels. Guest artists who have appeared with Aardvark include jazz luminaries Jaki Byard, Sheila Jordan, Jimmy Giuffre, Geri Allen, Raj Mehta, Lewis Porter, Dominique Eade and Matt Savage.

Mark Harvey is the founder and music director of the Aardvark Jazz Orchestra and teaches jazz studies at MIT. Harvey has performed in major venues including Fenway Park and Symphony Hall, Boston, the Knitting Factory and the Village Gate (NYC), the National Gallery of Art (DC), the Left Bank Jazz Society (MD), the Southern California Institute of Architecture (CA), the Berlin Jazz Festival (Germany), and the Baja State Theater (Mexico). He has recorded with George Russell’s Living Time Orchestra (Blue Note) and Baird Hersey & the Year of the Ear (Arista/Novus); appeared with Gil Evans, Howard McGhee, Sam Rivers, Claudio Roditi, and other notables; and has received numerous commissions In 2015, Dr. Harvey was named Boston Jazz Hero by the Jazz Journalists Association, one of 24 jazz advocates/activists recognized nationally for significant contributions to their communities.