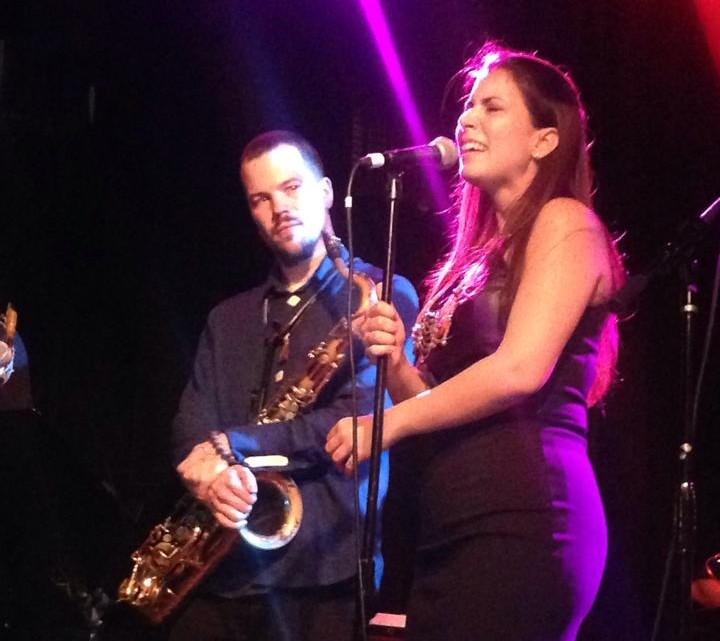 Jazz/neo-soul singer Aleksandra Denda presented her debut album “Dreamer” at New York City club DROM this week.  The album represents a unique combination of acoustic and electric elements with touches of neo-soul, jazz and R & B.

As a prominent member of the New York-based artist group LeitmotivArts, Aleksandra delighted the packed house with her voice, original and catchy compositions and lyrics that left nobody disappointed. The audience, which was a mix of different ages and cultures, did not hide their admiration for this great skilled singer. They felt sincerity and authenticity, immersed in the quest for love and internal upheavals in her songs.
Aleksandra Denda is neo-soul and jazz singer – songwriter who currently lives and works in New York. This Belgrade native has been performing and recording throughout the US, Europe and Asia for a number of years. As the creator and voice of Aleksandra Denda Group, she performs a wide array of musical genres, spanning from Soul to World Music, Brazilian, R&B, and Jazz. She is also the co-founder of vocal group ROSA, which is the only authentic Serbian a capella group on the American continent.

The album contains six original tracks which portray her distinctive artistry, as her sultry voice daydreams about the perfect lover, forgiveness, inner bliss and artists’ place under the sun. Aleksandra’s enchanting blend of celestial harmonies, captivating melodies and insightful lyrics will undoubtedly speak to all those seeking truth and authenticity in music.

Leading a ten-member band, Aleksandra truly won the crowd with her performance and proved that apart from being a terrific singer she is also a very talented songsmith. Her interaction with the mesmerized audience continued long after the performance ended.

The release of her debut album was preceded by her education at Berklee College of Music in Boston. Shortly afterwards, Aleksandra collaborated with many prominent musicians from all over the world, which led her to India in 2015 where she taught music at the Global Music Institute in New Delhi. Other projects included performances with American Idol’s Michael Lynche (aka Big Mike) as his background vocalist, recording with the flamenco star Jose Merce on the Latin Grammy nominated album Mi Unica Llave, and co-founding ROSA-the only traditional Serbian all-female a cappella group on this side of the Atlantic.

“It is a sheer joy to work with such versatile artists like Aleksandra Denda. We collaborated on several projects, including humanitarian events where Aleksandra demonstrated that she is a person of a big and open heart, so we quickly found a common language. We have good reasons to and must support these artists as they give excellent contribution to our culture and musical heritage. I am happy to have the opportunity to blow some wind into the sails of such people and world-class talents in whom I see the hope of a brighter future.” – said Danijela Milic, founder of LeitmotivArts.

Aleksandra especially wowed the audience with the song “Already Here”, included in the album as a bonus track. This composition was created in cooperation with the Indian singer-songwriter Vasuda Sharma. Immediately after its video release on February 29th, it  picked up support from India’s MTV and Rolling Stone Magazine.

“Already Here” is a song which challenges the idea that the sense of joy and fulfilment is in the future and wants to show that the present moment is invaluable” – says Aleksandra Denda.

Album is available at www.cdbaby.com/m/cd/aleksandradenda