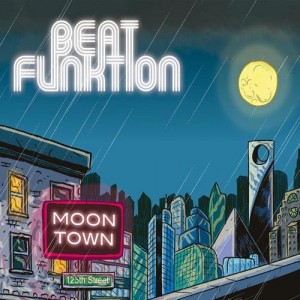 Beat Funktion’s sophomore release Moon Town is by far one of the most intellectually interesting, excitingly dynamic, and groundbreaking spins to cross my desk in many years. Lifting off to an eclectic galaxy of ingenious melodies and renegade rhythms, that is in a galaxy that is far far away from the musical norm; one is sure to gain high respect for the captains behind this trip!

The projectiles of sound catapulted from this disk are of high dynamism and intelligent precision. From their debut project The Plunge to now, their increased desire to go beyond the traditional scope of composition is most apparent. This is not bursting with your typical geriatric grooves displayed within such a typical new-age performance, they’re fresh and full of “left of center” vibes with boundary pushing segues.

The genre-bending swagger between blues and jazz entitled “125th Street and 7th Street”, created by Oliver Nelson, becomes a beat heavy retreat for the blues fandom. Intertwined amongst the music sheets is two solos’ that capture the journey of the arraignment, never letting the audience depart from the main drive.

“City Lights,” which follows the above cut, has a very distinct signature for a band, it defines their versatility, both in their composition and project development. I found this late night city ballad, if you will, a melodic testimony to the heartbeat of city life after the sun reduces behind its metallic forest. A comforting piece, it lowers the pulse of the audience as they flow into the arrangements trance. Exquisite in composition as it inoculates a profound impression upon the audience. Try to embrace the orchestral feel, as the keys tell the story of an inner city romance with the skyline.

Beat Funktion is a collection of finely tuned musicians scorching the stage in every city they perform. Pianist Daniel Lantz surrounded himself with vibrant talent and to experience the beautiful struggle each of the sounds endure during a performance just igniting the audience, as they discover the bands intuitive interaction. In today’s world of jazz Moon Town can easily move the tectonic plates of a radio’s playlist, pouring out molten jazz as its spewing the blues.