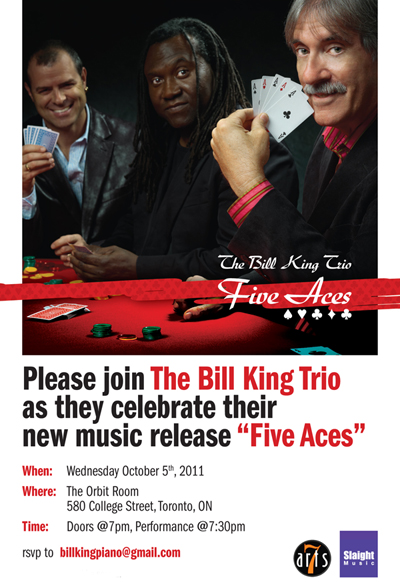 It was the summer of 1963 when I earned my first lesson in the blues from piano giant Oscar Peterson.

I was sitting nervously in Mr. Peterson’s office at 21 Park Road in Toronto with a head full of questions. “Mr. Peterson – what should I be listening too.” I do remember a slight tremble in my voice. This was my musical hero – one big imposing presence. “Bill, you’ve got to learn how to play the blues – it’s in everything.” Peterson paused for a moment then reached behind and pulled two LPs. “This one is about the blues – Junior Mance at the Village Vanguard and this one is about things to come – Claire Fischer – Surging Ahead. Peterson then points to the Vanguard album and says, “If you want to play blues piano – it’s all there. Just listen!”

When I returned to Louisville, Kentucky after six weeks studying with the master at the Advanced School of Contemporary Music, I went on a serious hunt for both recordings. Magically, I found both.

As soon as I was safe at home I dropped the needle on the first track of Mance’s blues declaration – ‘Looptown,’ nice – but way too fast to comprehend – then ‘Letter From Home,’ now we’re talking, and finally ‘Smokey Blues’ – a blues that builds from an ember to a firestorm – something I could transcribe. I heard it – every phrase; the storied territory between the notes – the place where the blues takes shelter – and fell madly in love.

As the years passed I would discover Booker T. and the MGs on a jukebox at Indiana University in Bloomington, Indiana sounding ‘Green Onions’ – Little Anthony and the Imperials ‘ Hurt so Bad’ on the radio. I couldn’t get enough. Then it was the bands I played with -The Shadows and the Chateaus and Cosmo and the Counts – nothing but the blues – Bobby Bland, James Brown, Travis Womack and Lonny Mack.

Then one day I was on the road like the old guys – Southern California, Greenwich Village, Jersey Shores, and San Francisco. “Hold on I’m Comin’, Midnight Hour, 634-5789, I Can’t Turn You Loose.” Otis, Ray, Carla, Aretha, The Four Tops, Vanilla Fudge, Free, the Rolling Stones- the greatest era to be a living musician and I was a traveling student.

‘Five Aces’ is my recollection of that time and a tribute to every keyboard player who memorized those ubiquitous parts. With bassist Collin Barrett and drummer Mark Kelso at my side I feel we capture a sense of what it was like to be emboldened by a sound that claimed the best of soul, gospel and rhythm and blues with a sprinkling of jazz that empowered a cadre of talented players to invent something so incredibly powerful it spilled over decades later to the young players of today.
Oscar got me rolling; Junior made me sound good, the bands gave me experience and late great Canadian keyboardist Richard Bell defined gospel piano playing for me. Love and respect you all!

Previous post 2011-2012 Jazz Season in Triangle North Carolina One of The Best Yet!