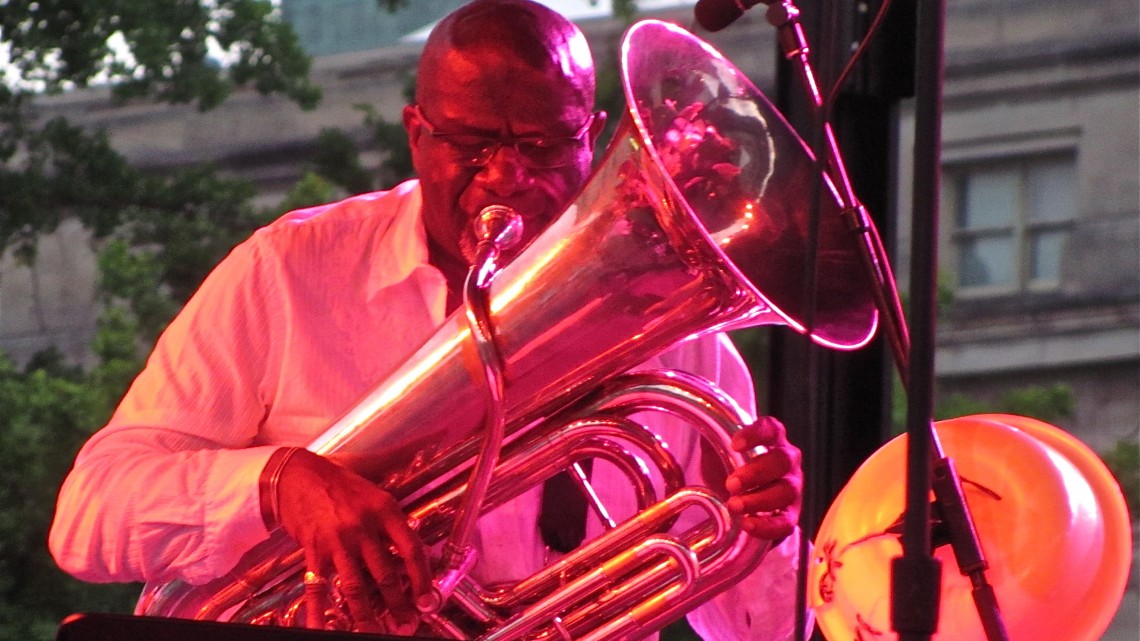 The career of a jazz tuba player will, in all likelihood, be diverse. The great Bob Stewart has made a name for himself in numerous eclectic settings, from the blues of Taj Mahal, to Mingus’s demanding compositions and the free explorations of Arthur Blythe. On his new recording Connections – Mind The Gap, Stewart bridges his own arrangements of compositions of his peers and heroes with movements from a special chamber piece entitled “In Color” that he commissioned from Jessie Montgomery for the PUBLIQuartet string ensemble.

Master tuba player and educator Bob Stewart recognizes how fortunate he has been to be affiliated with musical legends and peers who have displayed generosity in allowing him to present his unique conception of tuba playing to receptive audiences. His new recording – Connections – Mind The Gap – (Sunnyside Records) is at once a tribute to those artists representing various styles with whom Stewart was able to ply and develop his trade and it is also a forum to suggest and increase the repertoire for aspiring tuba players.

Connections – Mind The Gap is a varied collection of pieces that range from a five movement piece entitled “In Color” that Stewart commissioned from young composer Jessie Montgomery to pieces written by or performed by talented musicians the tuba player has played with over his forty year career. Though the compositions span classical, blues and jazz, the common denominator and uniting element is the tuba.

Stewart hardly needs an introduction. His career has been one of seeking challenges and passing on knowledge. His tuba has been featured on recordings from the jazz mastery of musicians like Gil Evans, Charles Mingus and Lester Bowie to the rock and blues inflections of Taj Mahal and Elvis Costello. Stewart has also been an active educator for just as long and has recently become a faculty member at the Juilliard School in New York City.

Stewart has been leading his own ensemble – First Line Band – since 1989. The current iteration of the group includes longtime member/guitarist Jerome Harris and the highly regarded drummer Matt Wilson, both of whose intuitive styles are perfect foils for Stewart’s playing. Stewart also includes his son, the fantastic violinist Curtis Stewart, in the ensemble. Keeping with the original brass led formation of the First Line Band, Stewart adds trumpeter Randall Haywood and trombonist Nick Finzer for a number of tracks.

In addition to the First Line Band, Stewart introduces the PUBLIQuartet, a string quartet (of which his son is a founding member), which accompanies Stewart on a five-part composition entitled “In Color” composed by former member, violinist Jessie Montgomery. The piece was commissioned by Stewart and was written with his abilities as the focus: Montgomery and Stewart held multiple listening sessions where she studied Stewart’s extended harmonics and other techniques that she would incorporate into her compositions. This makes these tone poems about Stewart as much as they are about Montgomery.

On the recording, the classical and jazz materials enable each other. There are aural elements that tie the performances together, most importantly the tuba. There are intentional elemental and spatial “gaps,” however. Obviously, there are stylistic leaps from jazz to classical to blues but there are also spaces between tracks that signal stylistic departures, thus the title.

The recording begins with the fifth movement of Montgomery’s “In Color,” “Red,” a short, somber rhapsody with a wide timbral array, which is followed by Frank Foster’s “Simone,” a supple piece Stewart played as a part of Foster’s Loud Minority band in the 1970s. The first movement “Aqua” is a deep piece featuring Stewart’s upper harmonics balanced by sweeping strings, while Arthur Blythe’s dancing “Bush Baby” is a wonderful display of First Line’s dynamic interplay. “Fishin’ Blues” is a laidback blues tune written by Henry Thomas, which was covered famously by Taj Mahal, another great supporter/collaborator of Stewart.

The second movement is “The Poet,” which features an active tuba melody over a steady string accompaniment. The mysterious “Odessa” is another Blythe composition and features the moving violin of Curtis Stewart. Astor Piazzolla’s “Libertango” suits the ensemble and the tuba well, with its 2/4-tango feeling, fitting the big horn perfectly. “Purple” is the third movement and features wonderful textures between strings and tuba. Thelonious Monk’s “Monk’s Mood” is a great piece for tuba as the wide intervals in the melody allow the tuba to really speak, while Stewart’s romantic “Nothing To Say” speaks volumes with subtlety.

The fourth movement of “In Color” is entitled “Makina” and features the strings at their most avant-garde, creating a soundscape of scrapes and plucks with various interjections by Stewart. Jerome Harris’s “Hand By Hand” is a wonderfully emotive tune featuring Harris on vocals. Similar to the Monk composition, Charles Mingus’s “Jump Monk” lends itself extremely well to tuba with its intervallic leaps and moving bass line. The recording concludes with “Red 2,” a recapitulation of the introduction as a fitting bookend to the album.

Bob Stewart has been a proponent for the development of tuba repertoire and experimentation for quite some time. His new recording Connections – Mind The Gap is a tremendous collection of compositions that shows the vast musical landscape the horn can cover while in the expert hands of a tuba pioneer like Stewart.