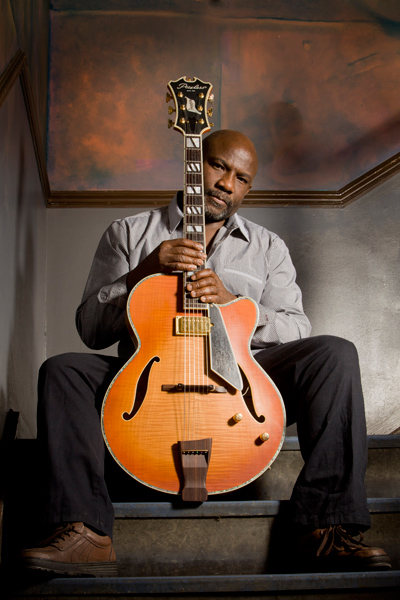 In a year of countless remarkable recordings, Radio Jumbo will be remembered as one of 2011’s most distinctive jazz recordings.

London is known for its staggering array of cultures and genres of music. However, accomplished London-based, Dominican-born guitarist, Cameron Pierre, has certainly helped to place the French Caribbean strains of Kadans, Meringue, Kompas and Zouk more firmly on the soundscape of the UK capital and wider afield in Britain.

Recorded in just a day at London’s Holodeck Studios, Radio Jumbo is named after an old Martiniquan radio station that once broadcasted out of the Dominica of Pierre’s youth. The CD notably features the dizzying artistry of Paris-based, French Antillean jazz pianist, Mario Canonge, who lends his infectiously bouncy and lyrical playing to the album.

Recalling his first meeting in France with the renowned Canonge in his liner notes, Pierre refers to himself as an ‘English explorer’. One could say that the album follows a long line of musical explorations into the related spheres of Haitian Kompas, Martiniquan Meringue and related French Antillean folk music, with a heavy leaning on jazz improvisatory techniques.

However, the uniqueness of Radio Jumbo, is that it delves a little deeper into Dominica’s wealth of folk music.

When Cameron plays banjo on a jing ping-inspired piece like “Traditional”, you are transported to somewhere near Roseau, attending a quadrille dance with the full panoply of the lete, latrinitez, lapoul and pastouwel. Ditto the title track, that conjures up images of a bevy of Dominican beauties dressed to the nines in their equally attractive Wob Dwiyet.

The musical ‘investigations’ carried out on Radio Jumbo also extend to the striking updating of Stevie Wonder’s “Another Star”, sung by lead vocalist Michele Henderson, against a driving Kompas riddim – replete with uplifting string section. One is also taken aback by the sheer intensity of Pierre’s guitar solo both on that track and wherever his solo spots illuminate this very alluring collection of sounds. The excellent string accompaniment is also featured on the lovely bossa-nova drenched interpretation of Mal Waldron’s “Soul Eyes”.

For this writer, however, “Big Foot” and “If Only” with their deceptively tricky chord changes (despite easygoing Antillean lopes) provide ample evidence of both Pierre’s and Canonge’s prowess as masterful Caribbean-born jazz musicians. Special mention should also be made of Kyron Akal’s delightful steel-pan solo on “If Only”.

With Radio Jumbo, Cameron Pierre – long a fixture of the UK jazz scene – has again served notice of his considerable stature as a jazzman. We hope 2012 and beyond will bring him even greater recognition.