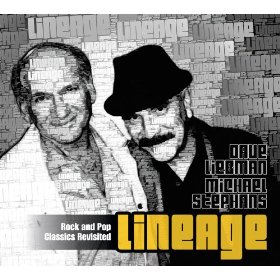 Even though Dave Liebman has earned a deserved reputation as an original jazz voice—to the extent of winning major awards, including the first of his generation to win the NEA Jazz Masters Award—he remembers his first experiences with music. However, earning a living and living up to performance commitments got in the way of commemorating them through music.

Now, though, after four years, Liebman has worked with drummer Michael Stephans to reminisce and reshape the music of their teen years through the harmonic and sonic language that they have developed through decades of exploration and collaboration with equally innovative musicians. In essence, Liebman’s group has taken songs from universally familiar single recordings, seemingly unalterable in their preservation as cherished artifacts rather than malleable pieces of music. Then they have reconstructed them from personal filters, freeing the songs of repetitiveness and breaking the rules of pop song production.

Who remembers The Chordettes’s recording of “Mr. Sandman,” except for people of a certain age? Who has heard that song from the 1950’s performed with serious intent, rather than as mood reinforcement for commercials or television shows?  Well, Liebman was eight years old when “Mr. Sandman” was on The Hit Parade, and now he has awakened listeners to a version that is more rhythmically interesting, wackier, more restless and more nuanced. Ironically enough, the arrangement of “Mr. Sandman” takes the listener through several energizing moods that defy drowsiness, from the ominous tension of its characteristic vamp to a light shuffle with Liebman on soprano sax to Bobby Avey’s free-improv piano solo to mid-track intimations of swing to an extended syncopated repeat slowing for connective soloing to a final, fairly direct statement of melody.

The brief harmonic and rhythmic tussle within “Mr. Sandman’s” introduction—bassist Evan Gregor’s familiar vamp undermined by Avey’s haunting out-of-sync descending treble and ascending bass notes—achieves fruition during “Wipe Out” when guitarist Vic Juris and Stephans take off in full rock mode as if a replication of the Surfaris’ song were to take place. Instead, Liebman on tenor sax comes in before the melody normally begins. Then it becomes apparent that he’s playing aginst the usual tempo at a slower pace of his own, creating tremendous rhythmic and stylistic tension. And it continues. Deliberateness next to vitality, maturity next to youth, pull opposing push, defiant rules-breaking next to joyous re-creation. And then even the familiar rock beat breaks down into free rhythm-less jazz as if jazz emerges the victor in the power struggle with rock.

Interestingly, despite “Wipe Out’s” battle of the genres, little re-harmonization occurs. That’s not true of The Beatles’s “Eleanor Rigby,” which receives occasional enriching harmonic alterations to convert it from pop into improvisational material, contrapuntal weaving among Liebman, Avey and reed player Matt Vashlishan leading to soloing with bits of allusion to the song’s melody. The same is true of “Love Me Tender,” whose slow, explorative, shady harmonies take it from the innocent lovestruck theme of the original to dolorous depths of loneliness with simple kinderlieder-like piano accompaniment and tenor sax wails, whispers and major-minor wavering. Simplicity nonetheless establishes mood with unexpected chord changes and imitations of human sounds, if not the human voice.

Lovesickness is suggested by the slow, deliberate treatment of “I Only Have Eyes for You,” which Liebman delivers with lower-register tenor sax resonance. Eventually, we realize that the piece becomes a showcase for an engaging extended solo by Avey. The similar largo treatment of these two songs about love wrings emotion from the original tunes with their alternative perspectives.

Lest we forget, the ever-popular “Tequila” was a hit in the 1950’s. Leibman didn’t forget this song whose original recording featured tenor sax. He tweaks the perennial favorite by adapting it to a seven-eight meter and liberates it to free jazz improvisation, particularly by Juris’s party-rock solo. In contrast, Stevie Wonder’s “Visions” receives little tweaking as, out of respect for the song’s essential beauty, Liebman delivers the song with gracefulness and sweetness on soprano sax while Juris, a long-time member of Liebman’s group, agitates the performance with a gentle nudging that elevates “Visions” to a more percussive state.

Then there’s Joni Mitchell’s “Woodstock,” which receives full-blown investigation and deconstruction made ominous by Avey’s expansive, roiling accompaniment, upper-register accents and dark colors. Liebman states the melody with wistful force on soprano sax before his launch into yet another memorable solo of eloquence and swelling and contracting intensity.

The Lineage of the CD’s title adds to the understanding of the project’s intent. While Liebman, Stephans and Juris are of the generation that experienced some of these songs when they were new, the other half of Liebman’s sextet is a generation younger. Rather than being an artifact, the music is the bridge. Songs of a half century ago now have received revitalization with ageless interpretations.