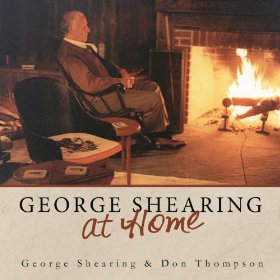 What more comfortable venue exists for a jazz musician than his or her home? Yet how often does a recording happen there? Some musicians like Chick Corea or Tony Monaco have recording studios in their own homes, but most others are less fortunate. Imagine being a fly on the wall when Dizzy Gillespie may have invited musicians to jam at his home or listening to Thelonious Monk practice at Nica de Koenigswarter’s home. Thanks to bassist Don Thompson, we are able to hear George Shearing play his grand piano, backed by Thompson, in front of his fireplace.

Shearing and Thompson were playing as a duo for six weeks in 1983 at a New York club. Eventually, they decided to record their daily practice sessions on Shearing’s reel-to-reel tape recording, and George Shearing at Home is the result—31 years later.

Thompson remembered the special circumstances of the recording and finally released it, as it should have been years ago when an independent producer hesitated, causing Shearing to lose interest in its distribution.

What we hear…finally…is further confirmation of Shearing’s elegant style and easy command of the piano, as he and Thompson breeze through sweeping versions of several medium-tempo songs like “Skye Boat Song” in three-four or “Out of Nowhere,” both of which benefit from the unmistakable Shearing touch.

Shearing gets wistful and Impressionistic with “I Cover the Waterfront,” one of four solo performances, as he effortless alters the harmonic underpinnings for beautiful, unhurried effect, as if he were considering at his leisure the song’s possibilities for musical personalization and surprise, in spite of its familiarity. On one chorus, his left hand plays melody to treble decorations in the right, or he virtually stops rhythm for cascading elaboration, or he punches staccato notes and chords for an ending veering between major and minor. Shearing’s is certainly one of the premier interpretations of “I Cover the Waterfront.” “Laura” would seem to be a logical choice for this collection of songs that allow for Shearing’s relaxed exploration of re-harmonizations and shifting colors, and sure enough, Shearing applies the shimmer and elegance of classical technique to the haunting chords of the song. However, Thompson prefers Shearing’s version of “Beautiful Love,” which is performed without accompaniment as a reverie, meditative with pauses for wonder and a key change to heighten the interest. With the suspense created by silence, Shearing uses the musical space as a means of communication, not to mention quietude, a quality made possible by the confines of his own room, rather than accommodating the need to project over the noise within a nightclub.

However, Thompson’s modesty and generosity belie the importance of his contribution to the album. His feel for Shearing’s music helps him ground it with a deep resonance that enhance the, for example, wit and shifting styles of “I Didn’t Know What Time It Was” from hand-clapping jauntiness with the bass notes on the first and third beats to the famous Shearing block chord chorus as Thompson walks four notes to the measure. Their interpretation attains fulfillment when Thompson himself adds his own melodic, agile solo above Shearing’s light background. On other tracks, like “SubconsciousLee,” Thompson responds with quickness and telepathy to Shearing’s phrases, in addition to supplying harmonic lines, before improvisation takes over. As always, Shearing chose a bassist who not only enhances his playing, but also challenges him to a high level of performance.

George Shearing at Home not only provides a valuable addition to the pianist’s discography, but represents a unique recording as well—one recorded on Shearing’s own piano in his own home.