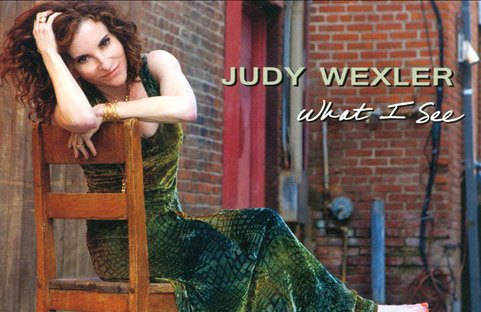 Judy Wexler’s fourth and newest CD, What I See (Jazzed Media, September 10, 2013 drop date) follows her acclaimed 2011 release, Under a Painted Sky (4-star review in Downbeat, top 10 on JazzWeek radio chart), and 2008’s Dreams & Shadows (profiled on NPR, debuted at #2 on JazzWeek) with another stunning, out-of-the-box collection of tunes.

Since releasing Easy on the Heart in 2005, Wexler hasn’t wasted a moment establishing herself as one of the music’s most incisive and engaging vocalists. Making radio waves and earning wide praise, her debut CD announced the arrival of a big league talent with a lustrous, fine-grained voice, impeccable technique, and a probing musical intelligence applied to a far-ranging repertoire of rarely heard gems.

With What I See, Wexler cements her reputation as an inspired interpreter of lyrics. She has been cited by critics as having the rare ability to find the essential truth of a song. As Christopher Loudon noted in JazzTimes, “there’s a marvelous clarity about Judy Wexler, both in terms of her immaculate phrasing and intonation and in her ability to strip a song, any song, to its bare essence, fully capturing its spirit and soul without an ounce of pretense of affectation.” George Fendel writes in the Jazz Society of Oregon, “Wexler possesses a nearly ingrained, somehow automatic feeling for delivering a lyric with total honesty.” Carlos Lyra, composer of the heartbreaking “A Certain Sadness” on What I See, says, “I love your interpretation and your voice. Just a few singers can interpret a song without changing its soul. And you did it.”

She is joined on this outing by some of the finest soloists and sidemen on the West Coast. Larry Koonse (guitar), Bob Sheppard (bass clarinet, alto flute), Ron Stout (trumpet, flugelhorn), Scott Whitfield (trombone), and Billy Hulting (percussion) augment her stellar working trio with Chris Colangelo (bass) and Steve Hass (drums) to add their own unique voices and textures to this eclectic mix of tunes.

Wexler’s background as a stage actress clearly informs her sensibilities on tunes such as “Convince Me,” where she compellingly portrays the psychological tension between the pull of attraction and the fear of heartache that love can bring, and the wistful longing of “The Long Goodbye,” where she makes palpable feelings of regret for a lost opportunity of a passionate encounter. In fact, the theme throughout What I See is the deep emotional connection to life- changing moments as told through Wexler’s expressive storytelling.

Encompassing a range of eras and musical styles, from modern tunes like “The Moon is Made of Gold” (a complete reworking of the Rickie Lee Jones classic), and “Follow” (from Richie Havens’ iconic album “Mixed Bag”), to old standards like “A Kiss To Build A Dream On,” forever linked to Satchmo, and “Laughing At Life,” a song kept alive by Billie Holiday, What I See is defined by a penetrating musical vision that consistently finds hidden jazz treasures.

Next post The Delaware Water Gap Celebration of the Arts Sept. 6-8, 2013