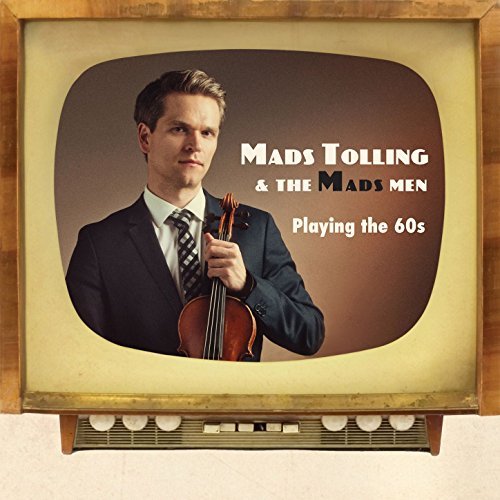 The virtuosity of Mads Tolling allows him to perform with ease and technical proficiency any type of music he chooses, including classical, pop and jazz. But for his new album, Playing the 60s, Tolling chose the mostly innocuous music of Motown, television themes and movie soundtracks from the 1960’s.

The track selection of Playing the 60s would suggest that that decade consisted of feel-good songs like “What a Wonderful World” or of can’t-get-them-out-of-my-head TV themes like “Hawaii 5-0.” All of these songs, as well as the others in Tolling’s album, are indeed memorable, and some have become in some cases cultural touchstones like Ray Charles’s version of “Georgia on my Mind.” However, they hardly give a sense of the entire breadth of music from the sixties, which included war protest anthems, Elvis Presley’s, psychedelia, Top 40s songs, racial inequality themes, Nashville music, alternative rock, Broadway compositions, and the music of The Rolling Stones and The Beatles.

Understandable. For one thing, Tolling chose the songs that he enjoyed from that era, even though he was born over a decade later. For another, the sixties was a ground-breaking decade for jazz recordings. Tolling listened intently and repeatedly to classic jazz records. As a result, he learned to perform jazz on his violin, the instrument on which he was trained, from numerous albums, including those of Miles Davis and John Coltrane.

Though Tolling initially performed traditional classical repertoire, his interest in jazz served him well, as he moved from Denmark to Boston to study on a full scholarship at the Berklee College of Music. Thereafter, he toured with Stanley Clarke and the Turtle Island Quartet, despite an invitation to participate in the Thelonious Monk Institute’s Masters Program. And now, based in the San Francisco area, Tolling can choose his own jazz repertoire as he leads his Mads Men Group consisting of keyboard, bass and drums.

While Tolling’s brief saccharine introduction of “A Taste of Honey” may recall that of Herb Alpert’s Tijuana Brass of almost half a century ago, the interpretation that follows, as set up by bassist Sam Bevan, combines his own propulsive vamp with sustained chords, additional occasional Tijuana Brass allusions, and finally personalized improvisations. The choice of this arrangement as the first track of the Playing the 60s presents the individual talents of the Mads Men as each has an opportunity not only to interpret the song on his own terms, but also to enjoy the freedom to improvise at length. The next track, “Meet the Flintstones,” hints at Tolling’s appreciation of humor in his music, not to mention the inability to eradicate a catchy song from memory. The mnemonic can’t-get-it-out-of-your-head hooks of those sixties songs are what seems to have attracted Tolling to them, despite his ability to play any genre he chooses. The playfulness of “Meet the Flintstones,” with its visual suggestions, its clippity-cloppity sound effects and its shout of “Wilma!”, coincides in terms of memorability with the signature whistling phrase of “The Good, The Bad and The Ugly.” Tolling’s Mads Men Band alters the themes slightly to adapt them to the talents of his band. “Meet the Flintstones” segues into “I’ve Got Rhythm,” a reminder of the infinite number of songs that can be created from its chord changes. “The Good, The Bad and the Ugly” assumes the insouciant approach of a shuffle through Bevan’s happy-go-lucky appended phrase, first stated by Tolling’s introduction. The Mads Men’s “Peter Gunn” arrangement, courtesy of drummer Eric Garland, provides an off-the-beat, staggered rhythm opposing the familiar melody instead of relying on Henry Mancini’s famous vamp, making it more locomotive than threatening. The move into a reggae beat, supplemented by Colin Hogan on Hammond B-3, lightens the mood even more before the band ends with the famous, heavily accented dramatic ending.

To make more explicit the recollections of songs from the sixties, Tolling has provided opportunities for Bay Area singers. Spencer Day, an admirer appropriately enough of Dusty Springfield, sings a straightforward version of “The Look of Love,” which she popularized. And there’s Kalil Wilson, a Kenny Burrell protégé and now a faculty member of the California Jazz Conservatory, singing “My Girl” with the suave confidence that the song requires.

But is Playing the 60s a case of a band leader stepping back and showcasing his band members and musical associates, even as he selects the album’s theme? Tolling plays an accompanying role on many of the tracks, as on “What a Wonderful World,” sung by Kenny Washington and made more notable by Hogan’s accordion work. Celebrating Jean-Luc Ponty: Live at Yoshi’s would be recommended for an appreciation of Tolling’s remarkable violin virtuosity before a live audience—virtuosity that has impressed Ponty himself, along with Herbie Hancock, Hal Crook, Svend Asmussen and others. In the meantime, on Playing the 60s, Mads Tolling reaches out to a broader audience with his recollections of the popular songs from the decade before his birth.