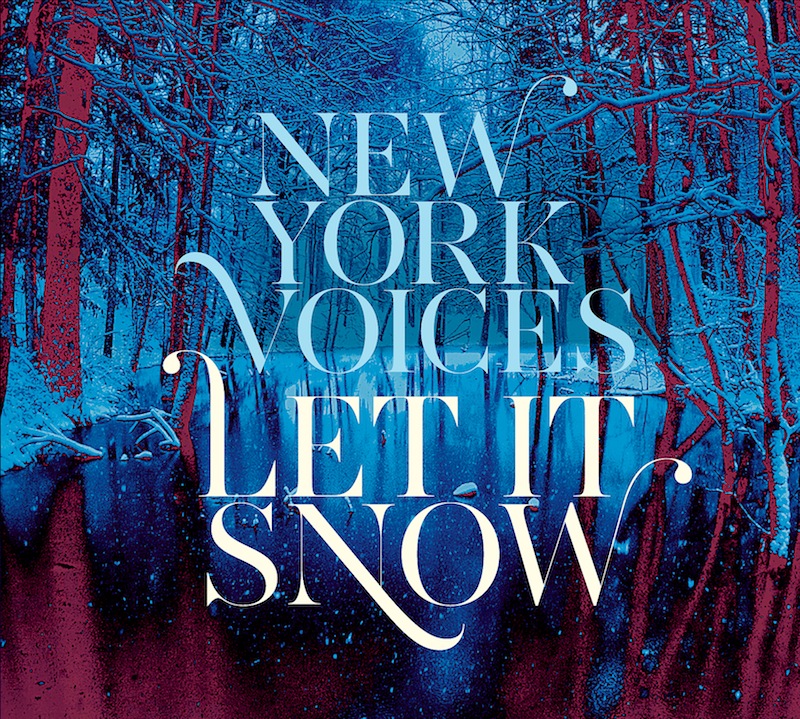 Just in time for Christmas 2013, appropriately enough, Let It Snow becomes available for listeners who appreciate ever-new perspectives toward the Christmas classics that annually recall the powerful sentiments of peace, togetherness and generosity. New York Voices’s perspectives derive from their own talents of close harmonies sometimes backed by a big band and sometimes sung purely without accompaniment. As a result, Let It Snow provides interpretations unlike others and no doubt will receive frequent holiday airplay every season hereafter.

Triple-threat Darmon Meader (vocalist, saxophonist and arranger) knows how to leverage the quartet’s unique and refined talents. After all, he was a founding member of New York Voices. His devoted commitment ensures that the spirit of the music matches the group’s distinctive style. The title song, for example, showcases NYV’s versatility in but three and a half minutes, including features like, let’s count them: (1) a punchy band accompaniment with trumpet, sax and trombone fills aplenty, as arranged by Don Sebesky; (2) changes of tempo and mood, particularly at the bridge; (3) an effortless (or so it seems) four-part scat chorus; (4) an invigorating scat solo; (5) a fast-paced Meader tenor sax solo; (6) a swinging female vocal interlude; (7) trademark close harmonies and vocalized “ba-da” accents; (8) cool new lyrics for a chorus of altered melody; (9) an extended surging finish with still more new final lyrics over a doubled-up sustained note; and (10) a last broad diminished seventh chord with the flatted fifth (the intervals that anchored West Side Story), exclaimed like trumpeters by all four singers right on pitch.

New York Voices has developed its own sound by now and has established its well-earned reputation. Even so, regret occurs that we infrequently hear this kind of disciplined, spirited, witty, tightly harmonized singing wherein individual voices are subsumed in the process of creating a distinctive collective small-group sound—despite the presence of groups like Take 6 or the venerable Manhattan Transfer. In fact, the stylistic excesses of individual singers backed by electronic accompaniment or guitar vamps make New York Voices an even rarer entity in an age when few listeners know who The Hi-Lo’s or The Modernaires or The Singers Unlimited or The Four Freshmen were.

Meader knows. One track of Let It Snow even pays tribute to The Modernaires with the brief 45-rpm-single-length vocal version of the David Rose’s hit from the 1940’s, “Holiday for Strings,” while an orchestra backs them up with Jerry Gray’s arrangement. Still, the straightforward tribute, without variation or elaboration, serves as yet another reminder of the days when radio and television networks retained on staff full orchestras and vocal quartets and commercial singers. Numerous musicians like Bucky Pizzarelli and Hank Jones made comfortable livings as studio musicians, and at one time The J’s with Jamie were ubiquitous as commercial singers often with similarly tight-knit harmonies.

Let It Snow was literally years in the making. Here’s how it come to be. As New York Voices entertained during Christmas programs in the past, the group of course added a few holiday songs each year as needed until a fairly extensive song list existed. Then after New York Voices toured with the Boston Pops for an entire Christmas season, the idea for a Christmas album started on its course to becoming the reality that Let It Snow now is.

That reality means that Let It Snow provides choral arrangements that New York Voices infrequently explored in the past. “O Come, O Come, Emmanuel” receives full appreciation of its spiritual meaning when NYV performs it a cappella. Only a minute and a half long, the track unfolds in layers—first with Meader and Peter Eldridge singing in unison; then with Kim Nazarian and Lauren Kinhan in unison and in response; and then as a unison quartet; and then as a quartet in conventional harmony; and then with slightly altered, modernized chords before the too-soon ending of effective concision, as if elaboration would damage the song’s sacred nature. The final two-minute track, “Silent Night,” is as succinct and reverential in its unaccompanied beauty, and it’s distinguished from the rest of the tracks by the fact that the first half of the performance is sung in German before the second half in English expresses its wish for peace.

The diversity of the arrangements ranges from the joyful, pulsating treatment of “We Wish You a Merry Christmas—made special by Andy Ezrin’s  flowing piano solo and the extended Swingle-Singers-like contrapuntal wordless singing—to a slightly modernized bow to Johann Sebastian Bach, with lyrics and without, during the choir-like counterpoint of “Sleepers, Wake!” to the re-harmonized version of “O Come, All Ye Faithful,” the closely chorded long tones arranged by Michele Weir and featuring Meader on modal soprano sax improvisation. The medleys of Let It Snow combine songs of similar moods and situations. The combination of Mel Tormé’s “The Christmas Song” and Vince Guaraldi’s “Christmas Time Is Here,” with its slower subdued pensiveness, varies in tempo and mood from “The Merry Medley” of “The Man with the Bag,” “I’d Like You for Christmas” and “Santa Claus Is Coming to Town,” with its wit and swinging big band back-up, suggesting a range of emotions elicited by the Christmas season. Meader’s reworking of “I Wonder As I Wander,” performed with a four-person horn section and the rhythm section, first appeared on a 1991 recording and serves as a perfect example of the way that various songs were assembled for the Christmas album. Now, 22 years later, it still provides an alternative perspective upon the song with its lengthened tones and Gil Evans-like chords and anticipations of the beat.

With the release of its first holiday album, Let It Snow, New York Voices embellishes America’s voices during the Christmas season.

Next post CD: Release Bev Johnson “Have Yourself A Merry Little Christmas (With A Little Jazz And Love)”