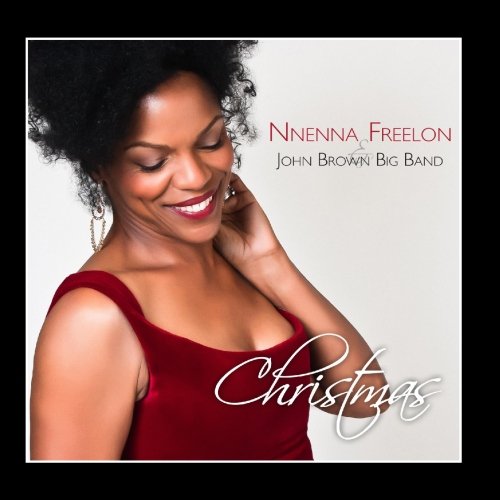 Nnenna Freelon was able to record her first Christmas album as the result of an inheritance from her mother, who introduced Freelon to the joys of the holiday and who made it so special that Freelon passed the traditions through her own family. Now, with Christmas, Freelon shares her traditions with her family of jazz listeners too, while establishing a remembrance and dedication to her mother.

A resident of North Carolina, Freelon teamed up with bassist John Brown, leader of his own big band and director of Duke University’s jazz program, to manage every aspect of the album—from the choice of songs to arranging to the selection of musicians to the recording studio’s location to the actual performance to mixing to photography and disk sleeve production to distribution to promotion. How much easier it was when a major label handled these details. Still, Freelon and Brown are proud not only of the result, but also of the fact that all those tasks were accomplished in their home state.

Another jazz talent who resided in North Carolina during his retirement was Frank Foster, who arranged the album’s first track, “Swingle Jingle Bells.” The creativity, understanding of the big band sections’ capabilities and the wit of the track remind us of the magnitude of the loss of Foster. As a clever way to introduce the band and the singer, Foster presents the first five notes of the chorus as a call and response among Freelon, trombone, celeste and the sax section. Then, with musical whimsy, Foster throws the listener off the trail as if the song were going to be “Sleigh Bells.”  Instead, “Sleigh Bells” turns out to be another part of the introduction before, yes, Freelon leads the swinging arrangement of “Jingle Bells.” A big band member, of course, in addition to being an unparalleled arranger, Foster sets up Brown’s band for multiple variations of the song after Freelon’s single first chorus. Eventually, the balance between singer and band is equalized as they ease into a slower three-four section before the joy of the powerful ending.

The John Brown Big Band really is the appropriate band for the album, not only because of its top-notch ability to interpret the feelings of the arrangers’ intent, but also because of its musical bond with Freelon. Not so coincidentally, members of Brown’s band, like trumpeters Derrick Gardner and Jay Meachum, created many of Christmas’s intriguing arrangements like “Let It Snow” and “I Like the Sunrise.” The mutual understanding between Freelon and the band’s members is most apparent on “Baby, It’s Cold Outside,” on which Brown himself joins Freelon in the coquettish give and take of the song, Freelon singing with her accustomed strength about prolonged departure and Brown with quieter, more abashed conversational objection.

Brown’s band and Freelon bring individual strengths to the album for a combination of originality, soulfulness, cohesiveness, artistry and fun. As the producer of Christmas on Brown’s label, Brown Boulevard Records, Freelon enjoys the freedom to provide her own Christmas gift to listeners in the manner she chooses, including song selections and interpretations. After she and Brown winnowed through their lists of Christmas song possibilities, the arrangers took over with interpretations that balance big band power and tonal breadth with Freelon’s musical personality.

Sure enough, Freelon’s personality shapes the album’s holiday spirit, particularly as a result of her devotion to her mother who inspired the album. Soulfulness abounds, naturally enough, when Freelon sings “Silent Night” backed by the band’s “All Blues” accompaniment, which also provides a platform for a forceful band chorus, not to mention gospel-inspired organ back-up by Brandon McCune. “I’ll Be Home for Christmas” ends the album with the danceable second-line rhythm, as if family were parading homeward bound through the streets. Freelon’s canny out-of-the-box song choice for Christmas is Duke Ellington’s “I Like the Sunrise” from Liberian Suite. A peaceful meditation among gospel and swing and bluesiness, Freelon ties the song’s premise to Christmas morning as families wake with holiday anticipation. She does it with her own brief introducdtion describing Christmas Eve slumber and, at the end of the song, her final whisper that “tomorrow it’s Christmas.”

Spirituality abounds too, starting with the “Spiritual Medley,” initially of voice and drums as Freelon sings “Children Go Where I Send Thee.” The medley moves on to “Go Tell It on the Mountain,” to which the band adds swing and exaltation. “O Little Town of Bethlehem,” slowly unfolding, captures the audience’s sense of wonder as Freelon’s voice is enhanced by the richness of the band’s colors.

Freelon finally achieved her goal of creating her own Christmas album. Good things do come to those who wait. Freelon was able to assemble the right combination of North Carolina resources for its production, and she was able to select the Christmas songs with the most personal meaning for her. And throughout Christmas, Nnenna Freelon infuses the spirit of Christmas with the soul of Christmas.