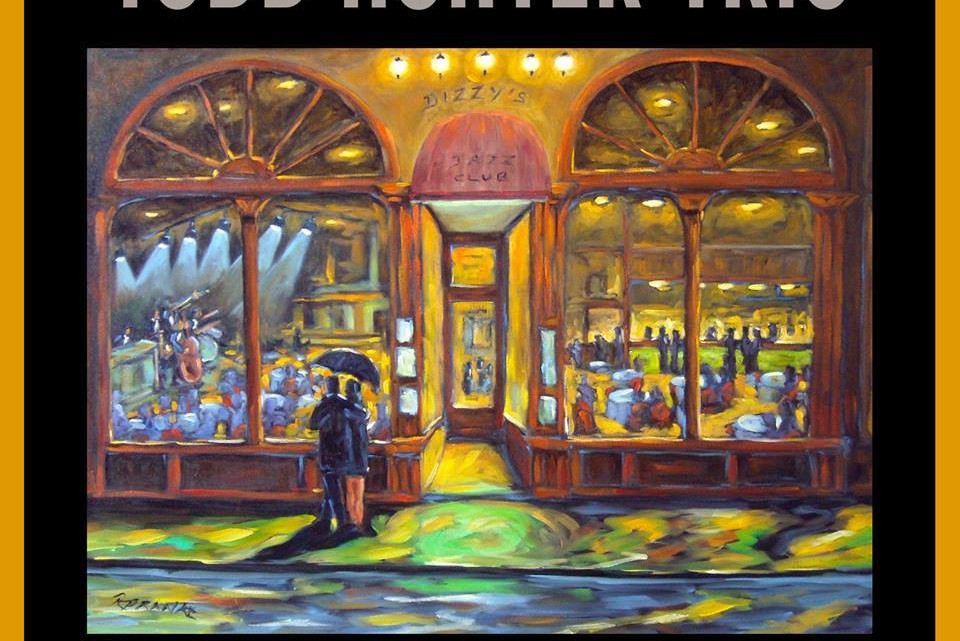 On his first piano trio album, Todd Hunter doesn’t include standards like “Here’s That Rainy Day”…or any others for that matter. Eat, Drink, Play consists entirely of Hunter’s original compositions, though they may sound somewhat familiar. That’s because Hunter, in his roundabout way of creating new music based on jazz piano masters’ styles, performs tributes to some of his early piano influences. The value of such tributes varies, though not in sincerity. Hunter’s performances on Eat, Drink, Play acknowledge the talent of his influences by the way he expands upon their contributions. The ease with which Hunter glides in and out of these influences’ reference points suggests the high degree of his talent and experience. More on that point later.

Hunter opens the album with his rousing song, “Big Bird,” no doubt to draw in listeners with its spirit of fun and its bounding motion. The title itself conjures up an image that evokes a smile and childhood ebullience. More importantly, “Big Bird” reflects Hunter’s affinity for, not only Joe Raposo, but also for Vince Guaraldi’s music, as the song suggests brief hints of Guaraldi’s technique and quick allusions to his changes on “Cast Your Fate to the Wind.” But Hunter combines improvisation reminiscent of Ramsey Lewis, and the opening vamp of “Big Bird” recalls Bob Dorough’s intro to “Comin’ Home Baby.”

The tributes to Hunter’s influences continue on his composition, “”I See More Than One.” Written in five-four, the piece obliquely recalls Dave Brubeck, who, appropriately or not, has come to own that time signature. But Hunter’s style, and his attitude, departs from Brubeck’s, for Hunter doesn’t employ Brubeck’s frequent block chords, and Hunter’s style is more ballad-like and flowing, with tones extending over the bar lines, than Brubeck’s. Infrequent rhythmic patterns continue on “Lucky Number 7,” with smatterings of darting playfulness associated with Chick Corea, whose Fender Rhodes innovations with electric bass receive recognition on Hunter’s “210 to the 15.” And the introductory changes to “Que Linda,” a song written for Hunter’s wife, calls back unmistakably to Bill Evans’s introduction to Miles Davis’s “Flamenco Sketches.” Despite the initial hints of modality and haunting understatement, Hunter instead brightens the tune into a melodic ballad, which in turn reveals its intention as a song written for his wife.

And that’s the thing. Hunter has his own musical personality, as did his multitude of piano influences, including those mentioned above. His talent is to transform his recollections, or to develop new ideas, into distinctive performances that express the facets of his own personality. Indeed, Eat, Drink, Play is an album whose individual tracks add up to a composite of Hunter’s personality—one that has developed over decades of performing around the world as an accompanist with top-shelf singers, most notably Dionne Warwick. And so, tunes like “Snake in a Bottle” arise from Hunter’s imagination and considerable talent as he recalls an experience in a Mexican bar, though it remains within his framework of the musical trio. Even without Hunter’s musical re-creation of his visits there, one can still hear connecting chord changes with brief allusions to McCoy Tyner or Ahmad Jamal. Hunter wrote “Moments to Remember,” a medium-tempo tribute to his father, Bill, who interested him in jazz with home jam sessions, and the result is affecting and affectionate. “Samba de Todje” flows effortlessly, suggesting Hunter’s ease in performing before Brazilian audiences, to which he has traveled often.

But just as professional are Hunter’s back-up musicians, bassist Dave Robaire and drummers Aaron Serfaty and Steve Hass, who contribute as equals to the advancement of the music, as do/did the other rhythm-section musicians of the great piano trios. Toward the end of “Samba de Todje,” Serfaty, with consummate professionalism and minimalism, rather than ostentatious display, solos to highlight the rhythmic drive of the song. Serfaty softly and musically heightens the effectiveness of Hunter’s intro to “Que Linda” with softly played drums tuned at different pitches before brushing behind the ballad. And while “Man on Deck” attains beauty on its own with the crafting of a melody allowing for compounding improvisation, bassist Robaire makes it even more effective with the subtlety of his note placement behind Hunter’s performance. Robaire provides the animating vamp behind “Snake in the Bottle” too, proving that he’s as versatile, confident and supportive as the other members of this superlative trio.

While the members of Todd Hunter’s trio may be frequent-flyer travelers, experiencing the joys and boredom of performing around the country and the world, their repetition of “Eat, Drink, Play,” suggesting ennui, certainly didn’t affect their love of the music. And for that we who hear the album are fortunate.
2016