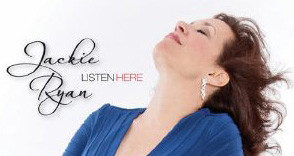 She always works with top-shelf jazz musicians, no matter where she records. She has wide-ranging musical intelligence and curiosity, and thus her choices for her albums remain unpredictable and delectable. She has mastered voice control so that she can extend her range over three octaves and adapt her voice to exigent musical circumstances. She allows infusion of a song’s feeling so that its expression attains a connection with her personality, thereby ensuring artistic honesty without artifice or imitation. And Ryan thus connects with her listeners.

It’s not that Ryan is helped by bassist John Clayton’s inventive arrangments; it’s that she’s enhanced by them. For instance, both Ryan and Clayton agree on the gospel theme of “Accentuate the Positive”—a theme that’s too often lost in the repetition of the title’s syllabic separations. So Clayton added son Gerald Clayton’s church-like soulfulness on the organ. Ryan added the too-seldom-heard verse of “Gather ‘round me everybody / Feel a sermon comin’ on me.”  Instead of the solid boom-chik-boom-chik familiar approach, Ryan and the musicians slow into urgent lines that, of course, rise to a rousing finish that’s positively uplifting. Or as a discovery and a re-interpretation, Ryan and Clayton convert a Nat Cole song, “To the Ends of the Earth,” into a samba that breaks loose drummer Obed Calvaire, not to mention trumpeter Gilbert Castellanos, whose slight, sly comments to Ryan’s energetic delivery evolves into a flowing, exciting solo.

As for introducing a newly lyricized song, as Ryan has done for Benny Carter and Joe Henderson, Ryan chooses the clever words for Jon Mayer’s “Rip Van Winkle” (written by Mark Winkler), which, as a private joke, refers to the pianist’s absence from the jazz scene as “the whole world forgot his song.” Show songs? There’s the sublime “I Loves You Porgy,” with its immediately recognizable, dramatic initial title phrase. Ryan opens the song with respectful delicacy, giving separate cushioned attention to each note. Ryan’s affinity for the unique but universal emotions of South American singing is represented by “La Puerta,” which she delivers in its native language as a tribute to her mother, a professional singer in Guadalajara. And her appreciation of lyrical wryness is reinforced by the title song, Dave Frishberg’s “Listen Here,” which positions a person’s inner voice to tell one’s self, “You can can count on me.”

The special event of the album is that renowned lyricists Alan and Marilyn Bergman have written the words to a John Clayton song, “Before We Fall in Love,” which Ryan brings to life for the first time as a track on the album.

Once again, Listen Here reminds listeners that Ryan is one of this generation’s premier jazz singers—one who continues to record in her prime always intriguing albums with, as always, some of her generation’s most accomplished jazz musicians. A unique talent from whom music naturally flows, Jackie Ryan combines the benefits of a trained voice with music’s emotional content that she conveys to her audiences.