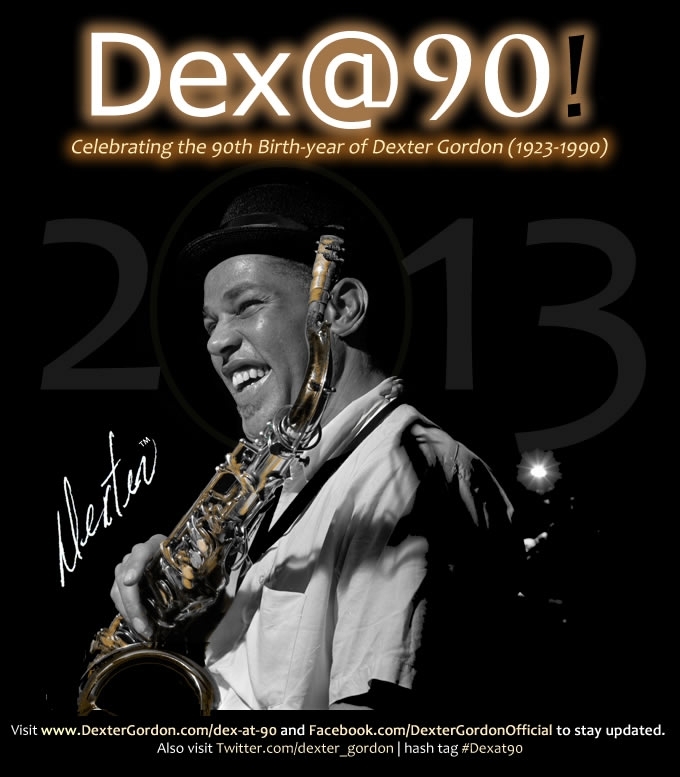 The Dexter Gordon Society, the foundation which formed in Dexter’s honor, will be launched on February 27, 2013 at Dizzy’s Club Coca-Cola in New York City in honor of Dexter Gordon’s 90th birthday.    On this date, the eve of Dexter’s 90th birthday, look for events in your city and online at  http://www.dextergordon.com/dex-at-90/  to join in the festivities:  Dex@90.

The Dexter Gordon Society, which was formed to honor and preserve the legacy of Dexter Gordon will be launched on February 27, 2013.

Thursday, February 7 , The Hartt School,  University of Hartford.  Screening of Round Midnight and a discussion by Maxine Gordon and Rene McLean.  7pm.

Tuesday, February 26, 2013, at 6pm, there will be a listening session at Dizzy’s Coca-Cola, NYC, with George Cables and Michael Cuscuna hosted by Michael Mwenso, late night host at Dizzy’s. There will be two sets with the band, 7:30 and 9:30pm, and a late set with invited guests at 11pm. For reservations, call 212-258-9595. www.jalc.org/dizzys

Monday, March 11-Thursday,14, 2013, events are scheduled in Madison, Wisconsin including screenings of Round Midnight and talks by Maxine Gordon at the University of Wisconsin with legendary bassist and educator Richard Davis.

Sunday, March 24, 2013, at International House, University of Pennsylvania, Philadelphia, at 5:00 pm, there will be a screening of Round Midnight followed by a reception and discussion. http://ihousephilly.org/events/commemorating-dexter-gordon%E2%80%99s-90th-birthday-round-midnight/

Sunday, April 21, 2013, 7:00pm,  The Tri-C JazzFest will present Javon Jackson with the TCJF Sound Works in Cleveland, Ohio. Maxine Gordon will be give a presentation at this concert and introduce the band. For tickets, call Nighttown, 216-795-0550. www.tri-c.edu/ENRICHMENT/ARTS/JAZZFEST/Pages/jazzfestschedule.aspx

Sunday, May 26, 2013, Paris, France, a tribute concert will be presented and Round Midnight will be screened.

Thursday, May 30, 2013, Copenhagen, Denmark, a tribute concert will be presented at Montmartre Jazz Club.

Other celebrations are planned for Gothenburg, Sweden and in the fall, there are celebrations at the University of Kansas and in Baltimore, Maryland and other locations in the U.S.