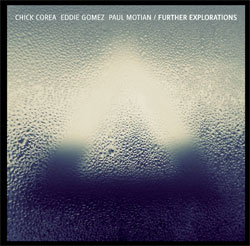 Recorded May 4-17, 2010, at the historic Blue Note in New York City, this program is a baseline of sorts, framed on piano great Bill Evans’ interminable legacy. However, one of the differentiators here pertains to the respective artists’ signature voices. In other hands, a set like this may just fall into the retread bucket.

Sadly, Paul Motian passed away in 2011 and was a historic member of Evans’ trio, appearing on the classic “Sunday At The Village Vanguard,” and other albums, featuring wunderkind bassist Scott Lafaro. Moreover, bassist Eddie Gomez worked with Evans’ latter day trios; therefore, this realignment along with Corea’s craftsmanship encompasses Evans’ aura sans any literal renditions or extensive mimicking. But as the album title suggests, the musicians engage in modern jazz expansionism, which is a prominent component that is integrated through pop standards, original compositions and works culled from Evans’ songbook.

The band works through slow to medium-tempo ballads, swing vamps and bop grooves, all spiced with copious improvisational segments. As Motian eloquently dances across the kit and kelps kick matters into a higher-gear during select spots. Essentially, they capture the essence of the classic piano trio format, yet wrap the festivities into a modern climate. The trio’s communication sparks an air of romance as Corea fuses Evans’ modal characteristics into various movements, but offsets any sense of complacency with bristling dialogues while tossing a few curveballs into the mix.

Gomez launches the pop standard “Alice In Wonderland” with an extended solo as he prefaces the main theme with an animated series of single-notes and chord voicings, steering the trio into the primary melody, tinted with linear phrasings and a loosely organized rendering of the primary melody. It’s an airy and effervescent spin on familiar vistas as they re-shape the piece, abetted by Corea’s flourishing patterns, crisp block chords and effective use of space to alter the current.

Nonetheless, variety is a persuasive factor, evidenced for example on Motian’s “Mode VI,” which is an inward-looking and somewhat melancholic motif, shaded by his soft brush-work and Gomez’ contrapuntal notes. With swirling clusters and some call/response mechanisms in-place, the musicians summon imagery of slowly moving waves caressing a beach. Otherwise, Gomez’s sizzling arco lines anchor a mid-tempo swing foray into a weaving panorama. And Corea customarily injects Spanish bravura into various movements, where the band toggles between a relaxed vibe, or exercises three-way unison choruses via highs, lows and spiking breakouts.

Further Explorations should wind up on quite a few top-10 lists for 2012, and deservedly so. It’s the artists’ musical kinship and signature stylizations that implant a momentous reference point, linking to the bountiful residuals. Then again, most jazz aficionados wouldn’t expect anything less.