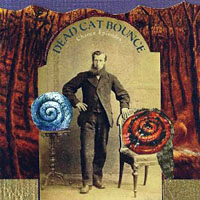 The band moniker alludes to a term used for a declining stock enjoying a brief recovery. But saxophonist Matt Steckler links this notion into “creative rebirth and renewal even as a time, tradition, and masters’ move on.” Therefore, the Boston-based sextet abides by conventional methods while injecting a modernistic approach via the “outside” component. It’s a program that boasts a diverse track mix, spanning jazz-related offshoots and multiple genres. With big band attributes, the four-sax frontline emerges as a potent entity that covers quite a bit of fertile ground throughout.

The band often leans towards a zenith, seeded by multi-tiered arrangements, shaped with keenly arranged storylines that are animated, brusque and temperate amid linear detours and tricky time signatures. However, they sport a big sound to complement subtle intricacies and brisk unison choruses. More importantly, each piece stands alone as the musicians thwart listener fatigue situations that could surface under normal circumstance since there are no chord instruments or trumpets, for example.

The ensemble introduces many slants and approaches to maximize the big sax attack. The septet navigates through a dirge, laid down by bassist Dave Ambrosio on “Tourvan Confessin,’” and highlighted by extended note sax phrasings, bluesy baritone sax notes, and a soul-stirring swagger. Moreover, they get down and dirty atop a supple pulse via the soloists’ ballsy exchanges akin to sermons iterated by preachers on a pulpit. In other areas, they bump, grind and swerve off-course, then use flutes as drivers for “Salon Sound Journal” and the bustling 4/4 groove heard on “Watkins Glen.”

Variety comes to prominence as the septet tenders a prismatic glimpse of its capabilities and applications. And they toss another twist into the program, witnessed on the South African stylized “Township Jive Revisited,” featuring a sprightly theme, underscored by drummer Bill Carbone’s perky snare drum progressions. Hence, Dead Cat Bounce often zooms in for the kill or throttles the energy level down to medium capacity with these crafty works that offer a holistic view of modern jazz, tinted by bounteous perspectives and the element of surprise. – Glenn Astarita