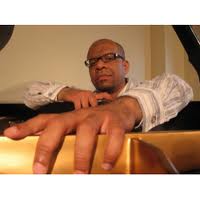 Venezuelan-born pianist Luis Perdomo has been a stalwart of the New York jazz scene since the early 90s and with Universal Mind—his fourth album as leader—accomplishes a dream he thought would never happen—recording with legendary drummer Jack DeJohnette. Perdomo had first heard the drummer’s work as a member of the Keith Jarrett trio, when he was a teenager living in Caracas. Bassist Drew Gress—who along with Perdomo—is a veteran of the Ravi Coltrane Quartet, joins the pianist and drummer for an intimate trio format cementing a fabulous three-way connection that works quite well in interpreting eight originals and three cover tunes.
The trio comes out blazing on a propulsive arrangement of the Joe Henderson piece “Tetragon” followed by a lighter and calmer “Langanau” where ever one makes an impression but not as pronounced as their respective performances on the “Rebellious Contemplation” sizzler. DeJohnette is dominant on this tune delivering fast-paced stick work as Perdomo catches up with deft handiwork on the keys. Perdomo and DeJohnette co-wrote “Unified Path I” and “Unified Path II,” two intimate duets playing off each other with a measure of respect and admiration.

Perdomo’s skills on the keys comes to the fore with his exciting play on “Just Before” accompanied by strong bass lines from Gress and the drummer’s firm performance. DeJohnette borrows the title track from his 1980 recording and contributes a new arrangement of “Tin Can Alley” containing improvisational twists differentiating it from the original. The music turns warm and gentle on Perdomo’s “Above The Storm” clearly a cut above the rest. The dream album closes with two additional originals wrapped around the Miriam Sullivan cover tune “Dance of The Elephants,” another light number adding a slice of the mellow on this disc. When three superb players combine to make a musical statement, one can be sure that the quality will be first-rate. With jazz icon Jack DeJohnette and bassist Drew Gress anchoring one of the finest rhythm sections to ever record, pianist Luis Perdomo can rest assure that Universal Mind will be received as a world-class project.
Year: 2012 Label: RKM Music Artist Web: www.luisperdomojazz.com