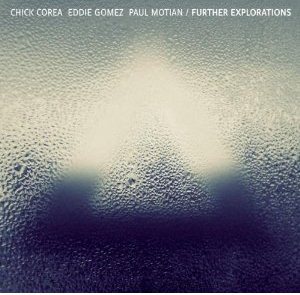 Unbelievable. Has has the impishness, invention and grace of a wild-haired thirty-year-old.

Obviously, Corea’s interests are wide-ranging, as documented by his weeks-long seventieth birthday celebration at the Blue Note in New York. During the month of November, 2011, Corea performed duos with Herbie Hancock, Gary Burton and Marcus Roberts; a trio with Gary Peacock and Brian Blade; a quartet with Stanley Clarke, Lenny White and Frank Gambale; a quintet with Wallace Roney, Gary Bartz, Eddie Gomez and Jack DeJohnette, as well as with Kenny Garrett, John McLaughlin, John Patitucci and Brian Blade; as accompanist and co-anything-can-happen improvisor with Bobby McFerrin; on electronic piano in his Elektric Band with Eric Marienthal, Frank Gambale, John Patitucci and Dave Weckl; and just as fascinatingly as a soloist.

As jazz continues to evolve, it’s becoming apparent that the golden ages of jazz didn’t occur solely in the swing, bebop, hard bop or fusion eras. This too is a golden age of jazz. Some of the jazz masters who started performing in the sixties and seventies have attained the exalted status that had been conferred on previous generations’ musicians. Like Corea, contemporary jazz masters are playing at the height of their talents that have been developed over decades of performances. And we, the listeners, are the beneficiaries.

The Corea trio’s interpretations of Evans’ music at the Blue Note in May, 2010, received deserved preparation and thought, starting with the selection of the musicians. Corea’s idea was to perform with members of the Bill Evans Trio as they revive, internalize and personalize his music. Fortunately, bassist Eddie Gomez, who performed with Evans from 1966 to 1977, shared Corea’s excitement for the project. So did drummer Paul Motian, who was in Evans’ trios with Scott LaFaro and Chuck Israels. The three of them pored through Evans’ discography and chose compositions for the occasion. Most intriguingly, the trio recorded for the first time ever a piece that Evans himself never recorded, “Song No. 1,” which Corea transcribed from a tape that Evans’ son offered him.

Believing that the magic that occurred at the Blue Note for that engagement should be shared, Corea and co-producers Bob Belden and Bill Rooney made sure that the 19 tracks of their choice would be preserved on the two-CD package, now made available by the Concord Jazz label. Like Evans’ live recordings, Further Explorations contains the free-spirited sponataneity encouraged by an appreciative audience, as well as inimitable musical excellence.

Not only are the trio members dedicated to the project’s emotional connection, but also they provide individualistic and exceptional work of their own, as they have throughout their long careers. All of the tracks, which Corea culled from 24 ninety-minute sets, contain bursts and glitters of brilliance, irrepressible, that emerge naturally, seemingly off-handedly, by these master musicians for whom exuding music is as natural as breathing.

There was Paul Motian, of youthful spirit and appearance, who had absorbed Evans’ music over a half century. Motian contributed the colors and textures and rhythmic extensions that Evans sought in his trio of equals, making the trio one that’s still revered. So, when Corea improvises a coruscating introduction to Evans’ “Laurie,” Motian respectfully and invaluably adds soft cymbal shimmers and brushed drum patterns to make the beauty all the more haunting. And yet when Corea performs his own composition, “Another Tango,” for a change of pace, Motian is fully engaged in the implicit humor and Latin-inspired emotion of the piece as he drives it with snare-drum rolls and crisp hi-hat clamping. Unfortunately, Motian passed away in November, 2011, at the age of eighty, even as he remained active on the New York jazz scene for over 55 years, always inventive and original.

Then there was Eddie Gomez, whose bass technique is instantly recognizable with its frequent double stops and effortless fingering and ringing tone, not to mention his imaginative soloing. Despite Gomez’s decade-long association with Evans, Corea took full advantage of Gomez’s strong support by allowing frequent bass introductions and solos on Further Explorations. On “Alice in Wonderland,” Gomez commences the performance with a dazzling solo that no doubt initially left the audience puzzled about where it was going until he eventually leads beautifully, after a two-minute freely expressed chorus, into the more conventionally performed melody by Corea. Gomez commences Evans’ “Turn out the Stars” with another masterpiece of an introduction that only a few jazz bassists could accomplish, classically influenced and bowed and covering the breadth of the instrument’s range, as Corea chimes in with spare upper-register tightly spaced bell-like chords. Eventually, Gomez cues in Corea with the song’s first four notes, as the piece proceeds with ethereal shimmering, untethered by rhythm for its first five minutes. The album includes contrasting versions of “But Beautiful.” Gomez performs “Part 1” as a solo with his typical command of the instrument and of-the-moment originality, a classic arco recording in itself of rubato consideration of the melody’s potential. Corea, himself inspired, plays “But Beautiful – Part 2” with commanding intensity and iridescent re-harmonization before it evolves into an irresistible swing by the trio.

And of course, there was Chick Corea, whose influence upon the next generation of pianists has been extraordinary as his never-flagging curiosity and unique talent have gone in numerous directions throughout his career, as his birthday celebration at the Blue Note suggested. Even as Corea acknowledges Evans’ influence, on Further Explorations, he does much more than channeling Evans. For Corea can’t help but be himself, a scampering, uninhibited, wondering, technically effortless pianist. Even with Evansisms abundant on the album, such as the harmonies of “Very Early,” Coreaisms remain unmistakable, like his signature leprechaunish adjacency of two-note treble chords. With concepts like his Elektric Band and Origin and Crystal Silence and My Spanish Heart proving the breadth of his interests, Corea’s idea of honoring the Bill Evans becomes yet another notable achievement in its concept and execution. And so Further Explorations will expand the Mad Hatter of jazz’s discography as another influential recording. Several times on the album, such as during “Hot House” and “Off the Cuff,” the trio stretches out with unplanned improvisation, letting the music take them where it will, and we get to hear Corea, never repetitive, provide yet more remarkable, seamless interpretations, always joyful and light and unpredictable.

As far as the members’ compositions go, Motian, whose groups he led continued to evolve with gigs around New York through 2010, contributes “Mode VI,” a leisurely minor-key haunting composition of long tones and meandering directions and dark Impressionistic suggestions. As for Gomez, there’s “Puccini’s Walk,” a quick, loping, engaging blues that Corea and he play in unison during the first chorus and then break into rivulets of streaming improvisation. And Corea, even though including another tango called “Another Tango,” provides a more interesting composition, “Rhapsody,” that he never recorded until Further Expressions was released. Not only is “Rhapsody” interesting as a dramatically pronounced, mysterious, sometimes rootless theme that remains unresolved until the end, but it fits in with the interactivity and freedom enjoyed by the members of Corea’s trio.

Further Expressions is a reminder of the infinitude of remarkable live performances that usually go unheard except by those in attendance for the fleeting moments of inspiration on stage. Then the music is gone. Fortunately, Corea made sure that the music heard by those at the Blue Note during the Evans tribute, like that within Evans’ Village Vanguard and Town Hall recordings, will remain available for jazz listeners rather than vanishing forever into evanescence.