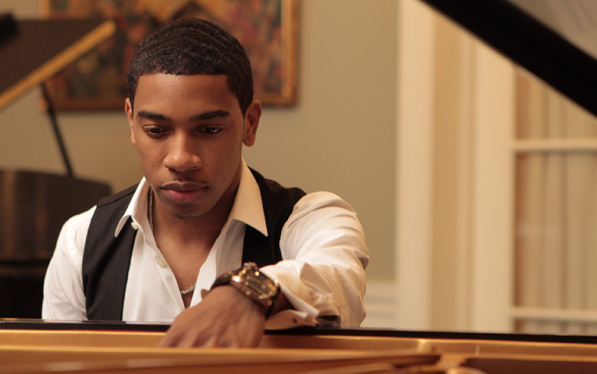 Christian Sands is an emerging jazz force. A recent Steinway Artist, he possesses pianistic technique in abundance, but it perfectly matches his conception.  His use of understatement accomplishes a much deeper musical goal.  He takes a fresh look at the entire language of jazz: stride, swing, bebop, progressive, fusion, Brazilian and Afro-Cuban.  He says, “My music is about teaching the way of jazz and keeping it alive.  Born May 22, 1989, Christian possessed an insatiable appetite for music.  He was enrolled in music classes at age 4 and wrote his first composition at age 5.  He received his Bachelor of Arts Degree from Manhattan School of Music.

His meteoric rise in the jazz world already includes two appearances at the 2006 and 2007 Grammy Awards, including an outrageous, highly publicized duet with legendary pianist Oscar Peterson.  At the young age of 20 he received two GRAMMY Nominations for Best Latin JazzPiano Solo, and Best Latin JazzAlbum for his performance on Bobby Sanabria’s “Kenya Revisited” featuring Candido Camero.  He is the protégé of Dr. Billy and has been featured on several performances with him at Washington DC’s John F. Kennedy Center for the Performing Arts.  Following in his mentor’s foot steps he encourages, inspired and advocates for the preservation and history of Jazz.  He teaches and promotes to young people as well as mature audiences the passion and richness jazz offers.
He has shared the stage with jazz luminaries such as Trumpeter Wynton Marsalis, Vibraphonist Stefan Harris, Lou Donaldson, Avery Sharpe, James Moody, Saxophonist Bill Evans, Russell Malone, Rufus Reid, Chip Jackson, Terrance Blanchard, International Drummer Alex Riel, Louis Hayes, Patti Austin, and Wycliffe Gordon to name a few.
But most recently he is a member of renowned jazz bassist Christian McBride trio and quintet group Inside Straight. The prowess of his playing takes him from Gilmore Jazz Festival in Kalamazoo, Clifford Brown Jazz Festival in Delaware, Martha’s Vineyard Jazz Festival, New York’s celebrated jazz clubs Village Vanguard, Jazz Standard and Dizzy Club Coca Cola to International jazz clubs in Russia, Italy, Japan, Corsiva, France, Belgium, Denmark and Germany.
As a pianist, he possesses an extensive vocabulary of patterns, textures and structures, which allow him to play in almost any style.  On his four inimitable CDs, Footprints (which was recorded when he was 12), Harmonia, Risin’, and Furioso (released in Japan 2009) he demonstrates his skills as a composer, arranger, and producer.  He provides a soulful melodic touch on S. Epatha Merkerson’s documentary “Contradictions of Fairhope” soundtrack recorded with Bassist Christian McBride. To be certain he has a firm grasp on the jazz culture he was named as one of Jazz future rising stars in “Jet Magazine” by Wynton Marsalis.  Coming soon he will appear on Christian McBride’s newest trio album to be release in 2013.  Playing his own music, he invents and re-invents himself with sonorities which define each moment, rhythms which impel the music forward, structures which are surprising and fascinating — and never for a moment un-musical.

He exemplifies the rising musicality and spiritual aspirations of a singularly gifted musical soul.  “To whom much is given, much is expected.”  Christian Sands doesn’t disappoint.