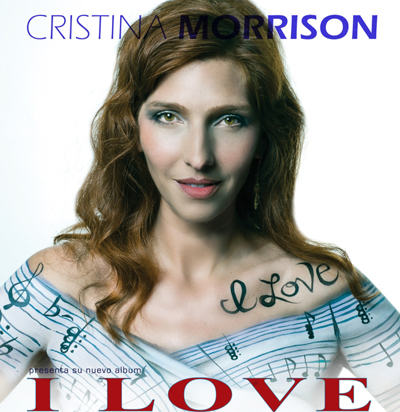 An accomplished actress and graduate of the prestigious American Academy of Dramatic Arts, New York-based vocalist Cristina Morrison unveils her debut album with I Love, offering a superb blend of standards and originals penned by her “partner in musical crime,” alto saxophonist Christian Hidrobo. Born in Miami of mixed American and Ecuadorian parentage, she has travelled the globe residing in Rome, Quito, the Galapagos Islands, LA and now in New York City. Her heritage and life experiences give the singer a unique multicultural view of the world that is quite obvious in her approach to the music. Accordingly, this album is an interesting mix of folk, jazz, blues, and contains elements of pop, Brazilian and other influences.

Backed up by her New York ensemble, Morrison’s crisp lush vocals leads the music in a tribute to her current home with an appealing melodic dance on “Summer In New York” featuring the simmering muted horn of Walter Szymanski and Marcus McLaurine’s walking bass line. Hidrobo’s soul-drenched alto saxophone voice introduces “Fifteen Day Affair” followed by Morrison’s delivery of the haunting lyrics to Gregoire Maret’s tasteful harmonica voice. The vocalist swings on the title track supported by the piano trio of Steve Einerson, bassist McLaurine and drummer Willard Dyson on the brushes.

There are many special moments on this disc and the beautiful melody of “Stand Still” is one of them. This samba-styled number takes off on the wings of Morrison’s vocal treatment and Maret’s gliding harmonica. The Latin jazz rendition of Mexican composer Maria Grever’s classic “What A Difference A Day Makes” is one of the defining pieces of the album mixing Morrison’s sensual vocals, light percussions and the guitar chords from Vinny Valentino making one memorable song.
Adapted from something the singer wrote after Hurricane Katrina struck New Orleans, “Red Mafia & Jass” takes on a slightly jazz-funk nature featuring more of Valentino’s electric guitar, the screaming baritone saxophone of Alex Harding and a boisterous brass arrangement from Szymanski. The other two standards interpreted well here are Brooks Bowman’s oft recorded “East of the Sun” and Billie Holiday’s “Fine & Mellow” which closes the set.

The project also contains a bonus video track “The Making Of I Love” offering an intimate look at the vocalist and band mates in the studio and where she confesses to the camera “Singing is more of an instinct to me…” One sample of this album will be sufficient to confirm the feeling for Cristina Morrison sings like a natural. Gifted with a beautiful voice, this new lady of jazz makes quite a splash on I Love, a debut recording capturing a graceful performance stylishly announcing her entrance into the world of jazz music.
Year: 2012 Label: Baronesa Records Artist Web: www.cristinamorrison.com