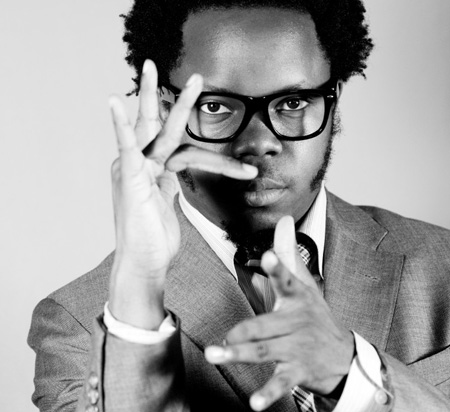 World renowned trumpet player Ambrose Akinmusire is photographed in… ( KRISTOPHER SKINNER )«1»If you’re headed for a hammock or a lake or a mountaintop — or just to your headphones — here are 20 new or recent jazz albums to explore and enjoy.

Ambrose Akinmusire: “When the Heart Emerges Glistening” (Blue Note): The young trumpeter from the East Bay is throwing out all the cliches to arrive at a fresh conception, much as Booker Little and Don Cherry did in the decades before him. His timbres and note choices often are startling. His tunes are dark-hued — and somehow gleaming, too. The 13 tracks are performed by his powerful working quintet; they are friends and peers, who have grown toward this music together.

Recorded at the famous basement club in Greenwich Village, this disc captures pianist Barth and his scrappy trio in front of a simpatico audience. The group is wailing; you practically can feel the atoms vibrating in the air. Seems like magic, but it’s really just the tangle and flow of three seasoned improvisers: Barth, bassist Vicente Archer and super-spanking drummer Rudy Royston. Most of the tunes are originals by the leader, typically taken at a sailing clip.

James Carter: “Caribbean Rhapsody” (EmArcy): On which the saxophonist is soloist for composer Roberto Sierra’s “Concerto for Saxophone and Orchestra.” With his teeming virtuosity — tender, then blustery; splintering, yet deadly precise — Carter dances through Sierra’s luminous work, performed by the Sinfonia Varsovia Orchestra.

The Cookers: “Cast the First Stone” (Plus Loin): Some champion players of the ’60s and ’70s — folks who came up with Art Blakey, Max Roach, McCoy Tyner and others — have found a new home in this all-star unit. We’re talking about saxophonists Billy Harper and Azar Lawrence, trumpeter Eddie Henderson, pianist George Cables, bassist Cecil McBee and drummer Billy Hart. Say no more, right? Playing a potent bunch of originals, they are joined here by saxophonist Craig Handy and trumpeter David Weiss, organizer of this project.

Chick Corea, Stanley Clarke, Lenny White: “Forever” (Concord): Something new leaps out with each listen to this 2-disc smorgasbord: Corea and White working up a version of Coltrane’s “Crescent” during a timeout in rehearsal, or Chaka Khan joining the band for a scarifying “High Wire — The Aerialist.” She is amazing, as is this trio of old mates. Even “500 Miles High” — come on, right? — is still thrilling, recorded here at the Hollywood Bowl and bubbling along on Clarke’s spring-driven bass lines.

Eliane Elias: “Light My Fire” (Concord): Honestly, I’d lose the title track and “My Cherie Amour.” But the Brazilian pianist-singer’s bossa-samba tracks — about half the album — are special, extra-special when Gilberto Gil joins her. (He is on three tunes.) The band, with guitarist Oscar Castro-Neves, is superb.

Robert Hurst: “Unrehurst, Volume 2” (Bebob Records): On this list of 20 top CDs, the veteran bassist’s new trio record easily places in my top five. Recorded live at Smoke, the Manhattan club, it’s warm-glowing and bristling, oscillating between white hot and red hot. It’s jazz that pulls you into its beautiful vortex. Hurst is joined by pianist Robert Glasper and drummer Chris Dave, two of the more fantastic players around.

Jon Manasse and Jon Nakamatsu: “American Music for Clarinet & Piano” (Harmonia Mundi): Clarinetist Manasse and pianist Nakamatsu are top classical players whose latest album sits comfortably at the cusp of jazz. They romp exquisitely through a new set of rags by composer John Novacek, and they imbue a four-movement suite by Paquito D’Rivera with midnight-blue moods. There’s also music by Bernstein and Gershwin, and the playing throughout is wildly excellent.

Lisa Mezzacappa’s Bait & Switch: “What Is Known” (Clean Feed): No phobias allowed: The bassist’s avant-garage amalgam is freedom (and craft) personified. If you’re into Ayler, Shepp, Sharrock or Captain Beefheart, you will appreciate this full-strength band.

Orchestre National de Jazz: “Around Robert Wyatt” (Bee Jazz): Built around tunes by Wyatt, the one-time drummer-singer of Soft Machine, this is exotic pop-jazz fusion. It’s something like Gil Evans (best of the old arrangers) meets Guillermo Klein (best of the new), with dollops of dreamtime Beach Boys prettiness and weird Tom Waits irony. Vincent Artaud arranges for the young band of fine soloists, with Wyatt among the vocalists, who are like spices, each one lending a strong new flavor to the proceedings.

“Putumayo Presents Jazz” (Putumayo): One for your summer barbecue. Just don’t burn the burgers: You and everyone else will be dancing once Nina Simone sashays into “My Baby Just Cares for Me.” Lots of classic stuff here: Louis, Billie, Zoot, etc., etc.

Ed Reed: “Born to be Blue” (Blue Shorts): The Richmond-based singer puts me in mind of Jimmy Rushing, Joe Lee Wilson, Abbey Lincoln — folks who sing (or sang) from the gut, from life experience, doing it with nobility and smarts, while feeling inside a lyric. Reed covers a lot of ground here, from Cannonball Adderley (“Old Country”) to Sammy Cahn and Jimmy Van Heusen (“All My Tomorrows”). And he has a sympathetic rhythm section, supplemented by saxophonist Anton Schwartz.

Alfredo Rodríguez: “Sounds of Space” (Qwest): The young Cuban pianist plays as if he eats Chopin and Stockhausen for breakfast. Beyond the conservatory-driven technique, he’s combustibly at home with Afro-Caribbean forms and rhythms and has digested the last few decades of jazz piano-trio evolution, boiling it all down with acuity.

Tarbaby: “The End of Fear” (Posi-Tone): If you like your jazz hard as nails, muscular and blues-rich, swinging like crazy, but going a little off the deep end, too, saying hello to Mr. Dolphy, laughing, careening and speaking the truth — then this is your band. Tarbaby (pianist Orrin Evans, bassist Eric Revis and drummer Nasheet Waits) hosts several guests on this CD: saxophonists Oliver Lake and J.D. Allen and trumpeter Nicholas Payton, who pushes the music to a boiling pitch on “Hesitation.”

Charles Tolliver Big Band (Mosaic Select): This 3-CD set includes the trumpeter’s first big-band album, one of the greatest jazz recordings of the last 40-plus years. I exaggerate not. Originally titled “Music Inc.” and recorded in 1970 for the musician-run Strata-East label (Tolliver was a co-founder), it captures jazz at a moment when its street credibility was still very much intact. Tolliver’s solos are incredible: He jabs, floats, knocks you out with his soul. And the tunes soar and strut: “Ruthie’s Heart,” “Household of Saud,” “On the Nile” — they’ve been giving me chills since I was a teenager. Also in this package: “Impact,” a big-band date from 1975, almost as good, and a recently unearthed set that pairs Tolliver with the NDR Big Band of Hamburg, Germany, from 1979.

David Weiss & Point of Departure: “Snuck Out” (Sunnyside): Totally smoking band led by the trumpeter, here championing lesser-known ’60s tunes by Charles Tolliver, Wayne Shorter and others. This quintet features tenor saxophonist J.D. Allen, who turns a couple of outrageously burning and impeccably crafted solos; if you don’t know him, he will soon become a favorite. Jamire Williams is the super-churning drummer on this mostly live date.