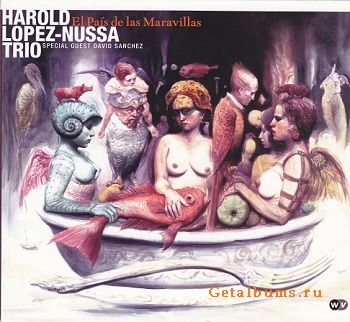 For decades, the United States and Cuba have shared a complex relationship. While there have been many business, travel and diplomatic restrictions between the two countries, U.S. citizens have gravitated to Cuba’s tropical culture – taking in the country’s sights, sounds and cuisines.

From a musical standpoint, in addition to the Buena Vista Social Club phenomenon and the enduring legacy of Los Van Van, there is a strong relationship between Afro-Cuban music and American jazz. Over the years, many of the world’s finest jazz artists have hailed from Cuba – virtuosos such as Bebo & Chucho Valdés, Gonzalo Rubalcaba, Paquito D’Rivera, Arturo Sandoval, Israel López and Machito as well as younger, rising stars such as Roberto Fonseca, Alfredo Rodriguez, Yosvany Terry and Dafnis Prieto.

Fast forward to 2010-2011: the relationship between these two countries and two forms of music continues. Last October, Wynton Marsalis & Jazz At Lincoln Center Orchestra conducted a five-day residency in Havana, working and performing with students, in collaboration with the Valdés family. This June, Concord Picante releases Ninety Miles, a collaboration featuring Stefon Harris, David Sánchez and Christian Scott (recorded in Havana over the span of a week).

One of the artists featured on Ninety Miles is pianist Harold López Nussa, who contributes to this overall trend in his own right.

“I saw Harold López Nussa’s Trio twice last December at The Havana International Jazz Festival and was immediately impressed. I came to find out he was extensively touring in Europe, was a Montreux Jazz Festival competition winner in the piano category and was heading back to The Montreal Jazz Festival for an unprecedented second year in a row,” reflected Kurland. “I am bringing him to Boston and New York City before and after his performance in Canada to see if we can now introduce him and his music to audiences in America.”

El País de las Maravillas begins with “Guarija,” a track that evolves into a full-sounding trio from an opening sequence of hand claps and whistles. The rhythmic theme, consistent throughout the track, sets a precedent for the prominent drum work by Ruy Adrian López Nussa throughout the album.

The pianist plays in unison with guest saxophonist Sánchez on the intro to “Caminos.” The conversation progresses throughout the track, with Sánchez taking a breath long enough for López Nussa’s musical monologue. The saxophonist comes back to him with melodic prose, solos and accompaniments weaving in and out in dialogue.

The title-track begins with a beautiful piano solo, with drums and bass breaking in around the two-minute mark, elevating the mood slightly. Energy peaks and continues to bounce in waves before the piano trickles out. The translation of the title is “Wonderland,” which is fitting for the peaks and valleys, spanning over the stunning landscape López Nussa has created.

Sánchez’s musicianship shines during “La Fiesta Va,” a track that features the Puerto Rican Grammy Award winner. The saxophonist sits in the background while López Nussa takes a solo, his horn accentuating the piano, which evolves into a type of mimicry, eventually progressing into a dual solo. Both musicians fly as bassist Felipe Cabrera and drummer Ruy Adrian López Nussa perpetuate the tune’s drive.

A gorgeous piano piece, “Perla Marina,” touches on López Nussa’s classical roots; the influence is apparent and the pianist is joined by fittingly sparse accompaniments on bass and drums.

Both “Pa’Gozar” and “A Camilin” have a fluency of a trio that has been playing together their whole lives. Vocals incorporated into “Pa’Gozar” add an energy that creates a hunger to see the band live. “A Camilin” gives bassist Felipe Cabrera a chance to shine during a solo that lasts well over a minute.

The following song, “E’Cha,” has an eager drive, with drums at the forefront. An abundance of musical ideas are presented, with the track culminating in the perception that the band just ran a musical marathon in just over three minutes.

Another tune featuring Sánchez is “Bailandoo Suiza.” The saxophonist is given full reign to take the music where he wants, and he does just that. His prominence leads nicely into “Volver,” which also features Sánchez, as well as another notable bass solo by Cabrera.

The closing tune finds López Nussa accompanied by his two cohorts, this time his brother supplementing the melody on vibraphone. The pianist drifts through the final track exquisitely, with a delicacy that hints at his classical upbringing.

To say the pianist is passionate about jazz would be an understatement; for those who knew López Nussa during his childhood and adolescence, it might also come as a surprise. In fact, López Nussa began his piano studies at the age of eight, studying classical musical. He performed in Cuba’s most distinguished theatres, as a featured soloist the National Symphony Orchestra and Matanzas Symphony Orchestra – eventually graduating with a degree from the Higher Institute of Arts (ISA) in Havana.

It wasn’t until the age of 20 that López Nussa fully dedicated himself to jazz. From that point on, he never looked back.