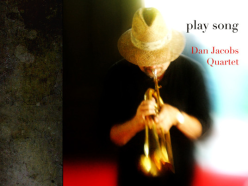 Veteran jazz trumpeter Dan Jacobs brings forth one of the most unexpected musical highlights of 2011 with the release of Play Song—a superior recording in every respect. Forming this quartet during the 80s’ in Orange County, CA where the band played at local venues, a quality production recording of the group’s music was never attempted until now. With the same players that appeared on his original quartet, Play Song comes to life through the acoustic piano of Gerald Hagen, bassist Ernie Nunez and drummer Peter Pfiefer. While this is essentially a quartet recording, Jacobs—who performs on both the trumpet and flugelhorn—includes percussionist Robert Mulligan to the mix making it a quintet on select tracks.

The album is a melody-rich contemporary jazz project drawing music from such giants as Kurt Weill, Bobby Shew, Wayne Shorter, Billy Mays and pianist Harold Danko—all perfect vehicles for Jacobs’ to showcase his more than appreciable chops. Opening up against a light percussive backdrop, courtesy of Mr. Mulligan, Jacobs employs the muted horn on a standout rendition of Bobby Shew’s “Cloudcroft” on waves of cloudless melodic winds. The band ventures sternly on the Shorter classic “Speak No Evil” featuring strong solo performances from the pianist, bassist as well as the leader.

Jacobs borrows the title track as well as the tune “No Hurry” from the Billy Mays songbook, the first a ballad piece and the latter a straight jazz burner. Flexing his muscles on the trumpet a bit, Jacobs peels off some of his best solo phrasings on the high-octane “One By One” while in contrast, Jacobs tones it down on the beautiful balladic “Alondra” this time performing on the flugelhorn. There are two versions of Danko’s “Tidal Breeze” and a masterful treatment of Weill’s immortal “Speak Low,” perhaps the most ambitious piece of the session clocking bin at nine and a half minutes in duration.