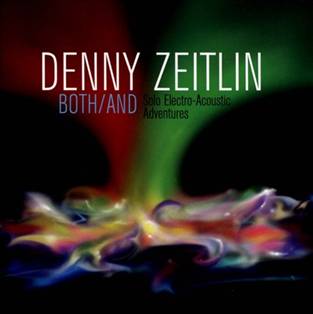 A solo revisitation and extension of Zeitlin’s groundbreaking 1968-78 decade of  integrating acoustic and electronic instruments in a music drawing on his experiences in jazz, classical, funk, and the avant-garde.

“The album [Both/And] is a magnificent work that combines acoustic improvisation with densely layered electronica and sound sampling… samples, software and instruments become electronic tubes of paint and the size and scope of what’s created is large, provocative and breathtaking. You have to hand it to Denny for continuing to let curiosity drive his explorations to the outer edges of the electronic jazz galaxy.” Marc Myers, jazzwax.com

“5 Stars [Highest Rating] Denny Zeitlin turns the solo piano world on its head with the most ambitious work of his storied career. A stellar performance and unique hybrid that others have attempted but with nowhere near the harmonic wonders that Zeitlin creates here…”
Brent Black, criticaljazz.com

“… his album [Both/And] is truly ambitious—not only does it sound nothing like his last album, but it sounds like no other album entirely…
All of Zeitlin’s compositions zig-zag through sophisticated detours, never settling for what you expected. Bizarre, fascinating, and totally worth it.”
John Garratt, popmatters.com

“Both/And is an extraordinary work of art… Denny Zeitlin is an orchestra, one that uses an acoustic/electronic blend with a master’s touch, to transcend even the “timbral limitations” of the orchestral format, creating his finest and most compelling work.”
Dan McClenaghan, allaboutjazz.com

“…as one might expect of a musician who has always demonstrated a high degree of accessible creativity, Zeitlin’s project is both a digital and analog, electronic and acoustic, success… a symphony for the 21st century bridging modern classical and jazz elements… playful and adventurous, a revelation of how modern technology can be harnessed and unleashed, artfully, by one multi-tasking puppeteer who brings together two worlds of sound in a cohesive musical embrace.”  Andrea Canter, jazzpolice.com

“Dr. Denny Zeitlin has made a career of creating a catalogue of some of the most imaginatively lyrical and sublime acoustic solo and trio sessions…This time around, the good doctor changes the prescription and treatment, mixing his signature sound with electronics that provide bass lines, percussion and a wide range of experimental sounds… A fascinating experiment that succeeds thoroughly well on various fronts.” George Harris, jazzweekly.com

2013 is a very special year for Denny Zeitlin.  He turned 75, is celebrating his 50th year as a recording and internationally concertizing pianist/composer, and has just released “Both/And: Solo Electro-Acoustic Adventures,”  that revisits and extends his groundbreaking decade of work begun in the late sixties.

After his recording debut on Columbia in 1963 as featured pianist on Jeremy Steig’s “Flute Fever,” Zeitlin went on to record four critically acclaimed trio albums for the label.  Then, restless with the timbral limitations of the acoustic piano, he withdrew from public performance for several years, developing a pioneering integration of jazz, electronics, classical, rock, and avant-garde music. This music emerged in the early 70’s with multiple recordings , culminating in the 1978 electronic-acoustic-symphonic score for “Invasion of the Body Snatchers.”

Zeitlin then returned to a focus on acoustic music recording and international touring, while keeping his ears tuned to developments in electronic music.  Since the 90’s and with the advent of the millennium, there have been exponential advances which make it more and more possible for a musician to create multi-layered music in real time, draw on vastly improved and expanded sources of sound, and more effortlessly record, overdub, edit, and mix performances.  Denny found these hard to resist, and began to seriously revisit this area, upgrading his studio, and furthering his explorations of the electro-acoustic integration of jazz, classical, funk, and the avant-garde. In parallel, he continued acoustic solo piano and trio performance and recording with Buster Williams and Matt Wilson.

As sole performer on “Both/And,” Zeitlin has recorded a collection of original compositions created on multiple keyboards in real time, as well as by overdubbing element upon element to build complexly orchestrated pieces of music, featuring hardware and software synthesizers, digital samples, and sound altering devices.  The only live acoustic instrument appearing on the album is his Steinway grand piano.  While there are numerous written sections, improvisation is at the heart of this music, and it was one of Denny’s goals to impart the feeling of players interacting spontaneously.

Zeitlin believes this project drew on all the important musical experiences of his life—the composers and performers, regardless of genre, who have touched him most deeply.  He hoped the compositions and performances would emerge as a broad and deep exploration of electro-acoustic possibilities. Initial critical acclaim from the jazz writers indicates that Zeitlin has accomplished his goal.

Zeitlin was born in Chicago in 1938. His parents were both involved in medicine and music. He began playing the piano at age two, studied classical music throughout his elementary school years, and fell in love with jazz in high school — a made-to-order medium for his primary interest in improvisation and composition. He played professionally in and around Chicago while still in high school. In college and medical school, he combined jazz with formal study of music theory and composition with Alexander Tcherepnin, Robert Muczynski, and George Russell. He graduated Phi Beta Kappa from the University of Illinois in 1960 and received his M.D. from Johns Hopkins in 1964.

He is currently a psychiatrist in private practice in San Francisco and Marin County and an award-winning Clinical Professor of Psychiatry at the University of California, San Francisco.