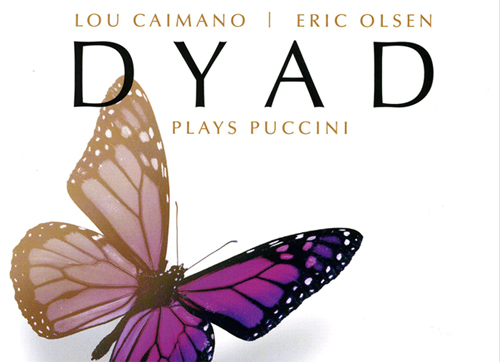 It is often said that no musical instrument more perfectly replicates the human voice than the saxophone.  On that note, when operatic soprano Pamela Olsen confided to her husband, pianist Eric Olsen that alto saxophonist Lou Caimano’s playing reminded her of an opera singer, a beautiful concept was born.  And a new adventure began for Dyad, Lou and Eric’s remarkable duo ……. Dyad Plays Puccini.

While the idea of re-imagining Puccini in the form of contemporary jazz arrangements might initially seem unlikely, the question quickly arises “Why isn’t Puccini as rich a source for jazz as Billy Strayhorn?”  After all, Puccini’s arias are some of the most beautiful and familiar songs in musical history, and certainly as ideal a territory for exploration as standards like Stray’s Lush Life, Monk’s ‘Round Midnight or Matt Dennis’ Angel Eyes.  As with those gorgeous melodies, Puccini’s music has been known to induce heart-wrenching emotions and streaming tears simply by the sequence of tones, without any consideration of the narrative content of the operas in which they’re contained. On this CD, Caimano’s beautiful tone and Olsen’s rich, lush lyricism evoke those same responses and a full array of other emotions from introspective melancholy to uplifting jubilation.

There is not a wisp of contrivance, or even a sense of ironic juxtaposition or playful parody in the delightful arrangements that these two remarkable artists have created for the ten classic pieces.  The original compositions are treated with total respect and the re-imaginations, while sometimes arresting, are always fully appropriate for the original intention of the composer.  Puccini could be as soulful as Otis Redding, as vividly lyrical as Ellington and as unabashedly beautiful as Tadd Dameron.  All of those colors and textures are contained here, but the fullest emphasis is upon beauty.

The alto saxophone/piano format might seem similar to the operatic singer/pianist format of the recital, but Dyad Plays Puccini is clearly an equal partnership with both instruments fully participating in the unique expression of this musical vision.  The ten arrangements – seven by Olsen and three by Caimano – have been artfully conceived to create the ideal contexts for the musical development.

As with all great jazz, chances are taken and the expected is often rejected.  Lou’s arrangement of Ch’ella mi creda (from La Fanciulla del West) is a vivid example.  Beginning most appropriately as a beautiful lament on bassoon-like alto and progressing into a proud anthem, Caimano’s soulfully bent notes and Olsen’s rhythmic chords take it not only into the 21st Century, but into a Harlem church.  If Shirley Caeser were to burst into the proceedings, it would be fully on point.
On Chi il bel sogno di Doretta (La Rondine), Lou arranges a delicately constructed theme that soon transforms into buoyant swing filled with intriguing interplay and dynamic solos – a footloose and joyous piece that is infectiously frenzied.  His other arrangement is on Un bel di (Madama Butterfly), one of Puccini’s most popular arias.  The breathtakingly beautiful melody is set against a striking piano vamp spurring a powerfully dramatic rendition that would make Maria Callas smile.  Olsen’s bluesy solo and his rumbling intensity under Lou’s rich alto add to the dramatic effect.

The remaining seven pieces are all Olsen arrangements.  Act I Overture (also from Madama Butterfly) is adapted by Olsen into a joyful romp, opening with delicious counterpoint on the melody and then moving smoothly into a west-coast jazz feel to a Latin groove, swinging viciously with Eric’s barrelhouse approach fueling the excitement and setting the tone for a powerful climax.

La Bohème is the source for two pieces.  Che gelida manina is appropriately filigreed in its sensitivity.  Olsen’s lovely piano solo ushers in an emotionally charged bluesy alto solo that glides so smoothly into the beauteous melody going out.  Musetta’s Waltz, which opens the album, is a jauntily bouncy item with lush piano, impassioned alto and remarkable interplay. The arrangement follows the shape of the operatic rubato a singer naturally would use. This feeling of rubato arises often throughout the album in both the arrangements and the improvisations.

In quelle trine morbide (from Manon Lescaut) is an elegantly etched duet that comes the closest to a traditional Classical recital, with an aura of genteel melancholy throughout the piece. A more intense aura of melancholy opens another of Puccini’s most famous arias, E lucevan le stelle (from Tosca).  Crystalline to cascading piano sets off the heartbreaking melody and the pianist’s dramatic solo.  Caimano builds on the drama with a dynamic solo that utilizes the full range of the horn with most powerful results on this extremely emotional and stunning piece. O mio babbino caro (from Gianni Schicchi), is transformed into a multi-textured excursion where the familiar aria becomes a launching point for polyrhythmic and complex melodic exploration, climaxing with brilliant call and response.

How could Puccini be properly portrayed without the incredible Nessun dorma (Turandot)?  An absolute tour de force on every level, this spectacular rendition closes this album in a most emphatic fashion. This is an extremely evocative and exotic version that compels the mind to visualize dervishes and other Middle Eastern imagery.  Oboe-like alto sinuously states the theme, morphing into a deeply grooved blues on the section where great tenors drive opera fans wild, setting the stage for a wonderfully expressive piano solo rich with Middle Eastern modality. Caimano’s exciting alto solo is full of tantalizing bent notes and palpably passionate tension.

The musicianship on this CD is extraordinary.  This is clearly a seamless creation of two men whose connection is virtually telepathic.  The production qualities are exemplary, with each note glowing and bursting through the speakers.
A brilliant concept, perfectly executed.