Eddie Gip Noble, “In The Lite Of Things” 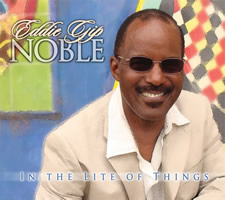 Eddie Gip Noble, “In The Lite Of Things”

Pianist and keyboardist Eddie Gip Noble blends Pop, R&B and jazz music styles with elements of jazz-fusion to produce his second solo album, In The Lite Of Things. Harking back to the seventies, Noble draws on influences from Teddy Pendergrass to Barry White for the infusion of Pop and R&B and also includes the electric-piano sounds of jazz-Rock for an overall Smooth jazz texture that permeates throughout the entire recording. The melody-rich music is certainly on the light side propelled by Noble’s tasteful piano lines on both the acoustic as well as the electric pianos.

Co-producer David Williams lend help on the drums with Jim Henken bringing up the electric guitar and singer Zuri lending vocals. The selection on the album includes several tunes not normally associated with the Smooth genre as the material varies in style. Starting out with the jazz-tinged “Linus and Lucy,” the music turns almost country with the a soft rendition of George Strait’s “Run” as well as the Charlie Rich piece “Behind Closed Doors,” smooth all the way. The Beatles’ “Blackbird,” Peter Gabriel’s “Red Rain” and Sting’s “Red Rose” draws from the British Pop scene.

Michael Jackson’s classic “The Girl Is Mine” from the R&B/Pop side of things, is provided with a special treatment with nice arrangements from Noble. Vanessa Carlton’s “Thousand Miles” and the finale number, “Save The Best For Last,” fill out the R&B material of the recording. Noble does include one original composition and it’s a winner. With Zuri on vocals, “Don’t Want To be Alone Tonight” is one of the highlights of the album. In The Lite Of Things is one beautiful album of light Smooth jazz that draws influences from many genres and makes it work quite well. Whether you prefer jazz or a taste of Pop, R&B to jazz-Rock, keyboardist Eddie Gip Noble crafts a project that includes them all into one nice package of Smooth music.