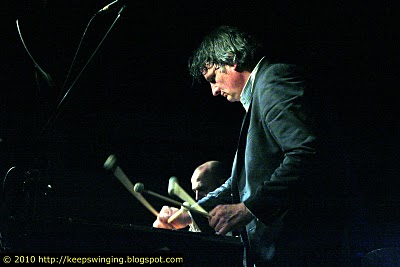 Born in Voorschoten in 1961, grown up in Hoorn. Graduated with honeurs in 1985 at the Sweelinck Academy of Music in Amsterdam.

Won various prestigious prizes such as Wessel Ilckenprijs, Pall Mall Swing Award, AVRO broadcasting company “The Promise” and the attention of the media served him well. Since then he has a full agenda, principally within The Netherlands.   Concerts with his own band, Frits Landesbergen & Friends. Yearly tours with Madeline Bell, The Rosenberg Trio, Louis van Dijk, and Cor Bakker.

Frits Landesbergen is all-round. Not only is he the best Dutch jazz-vibes player, he also is an excellent drummer and arranger. He teaches vibes, drums and combo at the conservatory of The Hague, owns a booking office and is a producer and composer.

You can book Frits as a Composer/Arranger, a Drummer, a Guestteacher, a Presenter, a Guestspeaker and as a Guestsoloist on vibes, as he did before with Big Bands en Harmonic- and Brass Bandorechestras.    www.landesbergen-music.nl

Previous post Swingin' with the All Stars: Louis Armstrong & Baseball