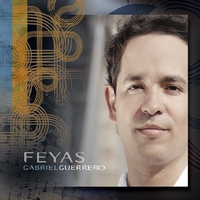 Colombian-born composer and pianist Gabriel Guerrero emerges from the talent-rich jazz environment of New York City as the latest hidden wonder to surface and stake a claim with a brilliant musical statement on FEYAS. Some people believe in angels that exist to protect and guide them. As a young child Guerrero named his angels FEYAS, as an adult, he’s thankful and grateful for the musical path these angels have guided him towards. A classically-trained pianist, Guerrero draws on a blend of be-bop, Latin, Colombian and other rhythms, contributing seven originals and borrowing two covers in producing this project. Performing with his core piano trio consisting of bassist Jorge Roeder and drummer Eric Doob, Guerrero augments the personnel to include the likes of tenor saxophonist icon Jerry Bergonzi—who appears as special guest—along with percussionist Samuel Torres and bassist Bruce Gertz among the fifteen musicians on the disc.
Lucho Bermudez was a leading figure of the 1940s big band era in Colombia and his “Colombia Tierra Querida” is reprised by the Guerrero who puts a modern spin on the music reflecting how the pianist feels about the current situation in his homeland of Colombia. One of the major influences on Guerrero’s musical career is the great Bud Powell, and with the percussive combination of Doob and Torres, the pianist pays tribute laying down quick right-hand phrases on a special percussive rendition of the master’s “Un Poco Loco.”

Drenched in the Bullerengue, Porro and ternary Colombian rhythms, “Hope” serves as a vehicle for Guerrero’s stylistic piano playing and showcasing his more than appreciable chops on the instrument. The pianist is just as impressive on “Charlie,” his tribute to the late pianist and educator Charlie Banacos whose ear-training education method is still used around the world. Banacos was Guerrero’s teacher and mentor in Boston. “Tonto Malembe” is an intricate Venezuelan Folklore tune while “Ritual” features guitarist Jeff Miles engaged in a beautiful piano/guitar combo in one of the delightful moments of the disc.
Penned for Jerry Bergonzi, “Snake Shot” as well as “Tango Reflexivo” highlight the tenor voice of the saxophonist on two more contemporary jazz pieces in somewhat a slight departure from the exotic feel of the disc. The album ends with “Crepusculo,” the lightest moment of the session featuring Guerrero’s performance of an improvised classical solo piece dedicated to his mother. FEYAS is a heavenly non-standard jazz endeavor delivering unique South American rhythms on a bed of strong classical elements and Gabriel Guerrero is the young architect of the spirited music found here. A virtuoso pianist and excellent composer, Guerrero does it all on FEYAS an album audiences will devour.

Previous post A Night with Bill King Celebrating 50 Years of Music at the Royal Cinema May 12, 2012 608 College St. West, Toronto, ON