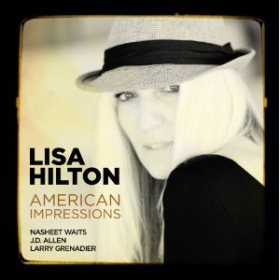 Under the influence of numerous safari’s in my career with Ms. Hilton, fourteen to be exact, one thing is certain, the Lioness of Jazz still remains untamed and wild in the ivory jungle. Her techniques never stoic, melodies seldom droll, and rhythms never without mental stimuli; Ms. Hilton continues to morph into a new wave of jazz’s ivory choreographers. Once more allowing me, with her new self-release American Impressions, to dissect and provide tribute to another level of composition eloquence, as is habit with her lovely note worthy progression.

American Impressions is what one feels it to be… within the listeners’ auditory space. As the ocular impressions from a painter’s palette to canvas to the feel of a sculptors’ visionary birth from dampened clay, Ms. Hiltons new project brings to ones ears the total sum of her inner battles of numerous eclectic moods. This is why she has kept on grasping higher levels with each studio endeavor. She understands the nucleus of her soul and what engages its sensitive design. I may describe her as a Lioness for her drive however she purrs from the heart with each note that escapes her inner psyche, indulging the true essence of her deliberate approach.

The sound off this spin delivers an exploration of Ms. Hilton’s romantic and structural makeup. The passions from cut to cut excites the anticipation of moods forthcoming, with the base of the journey being Hilton’s crafty performance along with the horn guiding the pathways. The structural aspect of this album comes from the “Outside the Textbook” format. Ms. Hilton not only develops music (jazz) as we expect it but also ignites flows that we don’t expect. She gives birth to virgin outlooks, lustful rhythms, and an innate injection of writing design. This combined together makes this album unique, escaping the industries current mediocrity.

“Rainy Night House” is, in many ways a prime example of the above opinion. It’s a finely sensual piece that has several behaviors to its spin. It registers with those of the long-term Hilton experience and draws in those whom are novices to her purr. I queried Ms. Hilton to draw from within her to explain this selections performance and she states the following, “Rainy Night House” is a Joni Mitchell tune that I had always admired. To me her best work exemplifies simplicity and is evocative at the same time. These are qualities I admire in compositions, and I think they are the cornerstones of most of our great compositions that we can immediately recall.” Ms. Hilton elaborates further on her many roles through her creative process, “I thought that the title itself, “Rainy Night House” is something we can immediately all relate to – just that phrase conjures a mood – that is her gift as a lyricist. As an artist and composer I am curious about what I can do with my instrument, with music, with sounds, with phrasing, to communicate a shared experience in the world. It’s about connection in the real world, through sound/thought/emotion/experience. To me, music is the original social network – it is a way the world can bond and connect, and it’s been that way for hundreds of years.”

Out of ten originals, the one that is most stylistically provocative is the spin you redeem with your Hilton token called “Subway”. Its growl of rhythms and personal moods makes it an ambitious effort. This cut forces the listeners from being afflicted with monomania, by affording and stimulating the suitors diverse senses which engage the lust of jazz’s inflicted romantic sway, through its underground flight in “Subway”.

The entire pulse of this jewel box escapes the patchiness of apathetic overtones and superficial charms. It’s far from tame, as its leader and gifted talents, bask in the beat of its ingenuity…

Judgment hails that this 14th journey with Ms. Hilton is a spiritual exploration within the atmosphere of an artist. Ms. Hilton’s expectation is that her new project is a transparent overview of her creative self.. From the point of the intro surge of “Waterfall” to the soulful ramifications of an “Accidental Romance”, one thing is certain, Ms. Hilton’s slice of American Impressions is more than just an effort from an ivory-toothed upstart… for the listener its more in tuned to the presence of this cats music, that seems to take the bite out of dull instrumentals.